Hurricane Harvey, a menacing Category 3 storm, was set to strike landfall Friday night with sustained winds of 125 mph, delivering a deluge backed by devastating winds and a massive storm surge to the Coastal Bend of Texas near Corpus Christi, the National Hurricane Center (NHC) said. 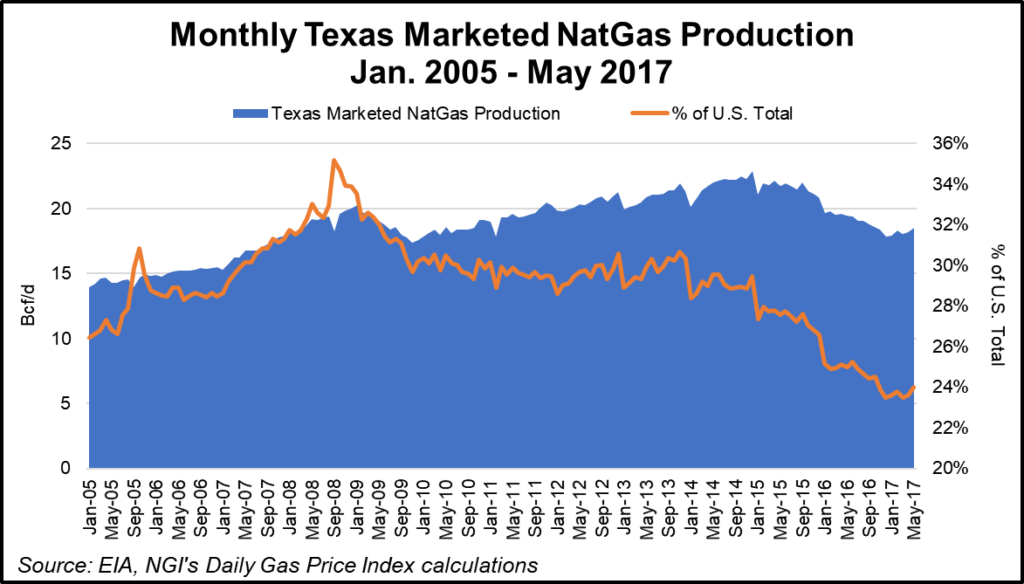 Forecasters were warning of a “tremendous amount of water both in rainfall and storm surge,” expected to last for several days, with an unprecedented 16 inches to nearly three feet of rainfall.

In its 4 p.m. CDT update Friday, the final update before presstime, the NHC put Harvey about 60 miles southeast of Corpus Christi and 60 miles south of Port O’Connor. Likely landfall was set for late Friday night into early Saturday morning.

Joining thousands of residents in their exodus from the Gulf Coast, offshore and onshore production facilities in the region were evacuated, as the extended coastline hunkered down for expected “catastrophic rainfall flooding” from Corpus to Victoria, all the way into the Houston-Galveston Metropolitan Area and southwestern Louisiana. Petrochemical and liquefied natural gas (LNG) export facilities as far north as Louisiana also joining the exodus.

The NHC expected a “tremendous amount of water both in rainfall and storm surge.” Hurricane-force winds late Friday afternoon outward up to 35 miles from the center, and tropical-storm-force winds extend outward up to 140 miles. Once it hits shore, Harvey is likely to meander near or just inland of the middle Texas coast through the weekend.

The Corpus area alone was forecast to see up to 32 inches of rain; the area’s average annual rainfall is around 30 inches. Corpus also was likely to see a storm surge of six to 12 feet. Rainfall along the Gulf Coast into the Greater Houston-Galveston region, home to the nation’s largest petrochemical and refinery complex, could be 12-18 inches, with a storm surge of three to six feet.

In addition to mandatory evacuations for areas near Corpus, the Cameron Parish, LA, Office of Emergency Preparedness (OEP) on Friday morning issued a mandatory order of evacuation for all areas south of the Intracoastal Waterway, impacting the Cameron LNG facility.

“Localized heavy rains, high water, downed trees and power outages are to be expected with the incoming storm system; these conditions are likely to continue through next week,” the OEP said. Once Cameron Parish officials determine the threat has passed and roadways are determined passable, the evacuation order will be lifted.

Cheniere Energy Inc. was taking precautions Friday but was not expecting Harvey to impact production at its Sabine Pass LNG facility. Spokesman Eben Burnham-Snyder said the company had evacuated personnel from its Corpus Christi construction site and closed its Houston office, with only essential personnel on site at Sabine, which was not in the expected path of the storm.

“Cheniere’s Gas Supply and Trading unit has activated its emergency protocols and will ensure that all gas flows and contractual obligations needed for production at Sabine Pass LNG will be met,” Burnham-Snyder said.

“If NOAA’s current expectations are realized, Hurricane Harvey will be the first major hurricane — those rated Category 3 or higher — to make landfall in the United States since four major hurricanes (Dennis, Katrina, Rita, and Wilma) made landfall in 2005,” EIA’s principal contributor Michael Mobilia said.

“Because of the slow speed of the storm and the forecast for it to stall over Texas, NOAA expects prolonged periods of torrential rainfall, leading to the potential for severe flooding in the region.” Texas Gov. Greg Abbott on Wednesday declared a state of disaster for 30 counties in the path of the storm.

“Flooding and high winds caused by Hurricane Harvey have the potential to affect energy infrastructure in the region, including the Texas Gulf Coast, the home to a great deal of oil and natural gas infrastructure,” EIA said.

Workers were evacuated from four of the 10 non-dynamically positioned (DP) rigs operating in the Gulf of Mexico (GOM), and 86 production platforms, up from 39a day earlier, the Bureau of Safety and Environmental Enforcement (BSEE) said Friday afternoon. A total of 377,177 b/d of oil was shut in, equivalent to 21.55% of GOM production, and 748 MMcf/d (23.24%) of natural gas was shut in. One DP rig had been moved off location out of the storm’s path, BSEE said.

Transcontinental Gas Pipe Line (Transco) saw 280 MMcf/d of production losses on its system Friday because of declines from offshore producers, according to Williams spokesman Keith Isbell.

“Williams has put its emergency plans and safety procedures into effect,” Isbell said. “Our operations teams have been vigilantly preparing for the storm all week, reviewing emergency operations checklists and making preparations to minimize any possible disruptions.” All offshore personnel were evacuated on Thursday, he said. “Noncritical personnel in facilities located along the Texas Gulf Coast have also been evacuated and will be operated remotely. No operational impacts have been reported.”

Meanwhile, inland Texas activity was ending too, with ConocoPhillips and Statoil ASA among the exploration and production companies that had suspended drilling activity not only in the offshore but also in the Eagle Ford Shale of South Texas.

Tudor, Pickering, Holt & Co.’s analysts don’t expect “significant nor lasting production impacts from Harvey” because GOM output has fallen to only 1.7 million b/d oil and 3.3 Bcf/d gas. Before Hurricane Katrina made landfall in 2005, GOM gas output was more than 10 Bcf/d.

“Moreover, a majority of GOM production is located off the Louisiana coast, which is not on Harvey’s path. However, the storm will certainly impact some production (current reports suggest only 10% of GOM production shut-in) and disrupt refinery runs, imports and exports…which will show up in the weekly inventory numbers for the next few weeks.

“Onshore production is less likely to be impacted other than deferral of completions in the Eagle Ford Shale, if the rainfall/flooding predictions come to pass.”

Barclays Capital analysts Michael Cohen and Warren Russell on Friday warned not to underestimate the impact of Harvey, which is the “first major hurricane to hit the U.S. Gulf Coast since the shale boom arrived.”

The Gulf Coast now exports twice as much petroleum from the area as it did in 2012, while global oil demand (ex-the United States) is “twice as dependent on exports from the U.S. Gulf Coast than in 2012, having increased from less than 3% to more than 6%,” the Barclays analysts said.

“As of 2017, the 29 petroleum refineries in Texas had a capacity of over 5.4 million b/d of crude and accounted for 30% of total U.S. refining capacity. Yet, the area that will be most directly hit includes five refineries that have a distillation capacity of almost 900,000 b/d.”

The flooding impact from Harvey could make it “more destructive to U.S. crude and product supplies, as well as port facilities, than the market is currently assuming,” said Cohen and Russell.

Product prices were moving higher as people evacuated from the Gulf Coast and as refineries were shuttered, thus curbing output.

The Barclays duo sees three potential impacts. The first is from temporarily shut production infrastructure in the GOM, which got underway in earnest on Thursday.

“We would not be surprised if more than half is shut as a precautionary measure through the weekend. That said, these production facilities have been hardened in the aftermath of hurricanes Katrina and Rita in 2005 and will likely rebound relatively quickly in the aftermath of the hurricane as long as labor can return quickly.”

A second possible impact is in the onshore, most directly the 1.4 million b/d Eagle Ford Shale, where producers were shutting in. And the final impact would be around trade.

Pipelines that terminate in the Corpus Christi area, totaling an estimated 1 million b/d, “could be delayed in their return due to flooding and the likelihood that companies will want to conduct inspections before returning to full service,” said the Barclays analysts.

The U.S. GOM accounts for almost 20% of total domestic crude oil production, and the Texas Gulf Coast is home to nearly one-third of U.S. refining capacity. “Hurricanes Gustav and Ike in 2008 and Hurricane Isaac in 2012 were the most recent hurricanes to make landfall on the U.S. Gulf Coast, with Ike being the last hurricane to directly affect Texas,” EIA noted.

The three storms together affected oil and natural gas infrastructure in the region, each shutting in more than 3 Bcf/d of natural gas production and 1 million b/d of crude oil output. The trio also temporarily shut down significant pipeline and refining capacity.

About one-half of U.S. oil production historically has come from Texas and the Gulf of Mexico. Texas also accounts for about one-quarter of domestic natural gas production.

Before Harvey had even reached land, donations were pouring in. ExxonMobil Corp. on Friday said it was allocating $500,000 for contributions to regional Red Cross organizations along the Gulf Coast to assist with relief efforts in communities expected to be impacted by Hurricane Harvey.

“We hope our contributions will help provide comfort to our friends and neighbors in areas impacted by the storm,” CEO Darren W. Woods said.

ExxonMobil also made provisions to ensure that emergency responders and other essential service providers requesting fuel were given priority.