Tropical Storm Harvey as of Monday had curtailed about 1 Bcf/d from U.S. natural gas exports to Mexico, according to Genscape Inc. 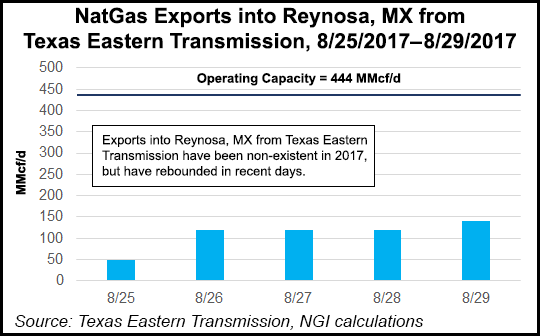 Senior analyst Rick Margolin told NGI that as in Houston, the Eagle Ford Shale in South Texas was waterlogged and Tennessee Gas Pipeline Co. LLC (TGP) also had problems. TGP last Friday declared a force majeure at its Station 1 near Agua Dulce and Corpus Christi and was monitoring Harvey’s potential impact on its South Texas pipelines.

The storm’s impact has led to a bigger loss of U.S. onshore supply — from the Eagle Ford Shale — than historically had been the case, according to analysts. It’s the first Gulf of Mexico storm to have a major impact on onshore oil and gas production, as operators in the Eagle Ford Shale began removing workers and shutting in output late last week.

However, the $3.6 billion NET Mexico system, which carries gas from the Agua Dulce hub to the Texas border town Rio Grande City, was affected by Harvey, Margolin told NGI.*

He added that only South Texas exports were affected. TGP exports dropped substantially and were only being partially offset by increased flows on TETCO, Margolin said, but all other U.S. exports out of Waha, AZ, and SoCal were unaffected.

From the border NET Mexico traverses the Mexican state of Tamaulipas and heads south to Nuevo Leon, home to several of Mexico’s leading industrial companies, and on to San Luis Potosi, in central Mexico, a rapidly growing hub of the nation’s export-orientated auto industry.

Other systems, such as those from the Permian Basin in Texas and in Arizona, were operating normally, Margolin said.

The U.S.-Mexico natural gas trade is dominated by the state-owned Mexican energy giants, the Comision Federal de Electricidad, the federal electricity commission, and Petroleos Mexicanos (Pemex). The CFE is the power utility, while Pemex produces and consumes oil, natural gas and petrochemicals.

Exports into Mexico from Texas Eastern Transmission (TETCO) have been an afterthought in recent years, but have resurfaced in recent days, according to NGI’s Director of Strategy and Commodity Research, Patrick Rau. “After averaging just 5 MMcf/d for all of 2016, and consistently coming in at zero for much of 2017, including the first 24 days of August, exports into Reyonsa, Mexico from TETCO hit 50 MMcf/d on Friday, August 25. Those ramped to 119 MMcf/d through the weekend, and increased to 140 MMcf/d for gas day August 29.”

“The pipeline systems that enabled transportation of exports from the U.S. to Mexico were developed by the CFE and Pemex,” said George Baker who heads Houston-based consultancy energy.com. “Only a handful of other companies are involved in the trade.”

Despite a raft of private-sector investments in gasoline retail, meanwhile, Pemex is the sole importer, pending new ventures in transportation and storage for the fuel. PMI International, the Pemex international marketing arm, remains Mexico’s only gasoline importer, whose business is seldom immediately impacted by such passing phenomena as Harvey.

“We’re still the only show in town where gasoline imports are concerned,” said a Pemex source.

*Correction: In the original article, NGI incorrectly statedthat Genscape’s Rick Margolin said the NET Mexico systemappeared to be the only natural gas pipeline affected byHurricane Harvey. Margolin actually said that it was only SouthTexas exports that were affected, which would be broader thanjust the NET pipeline. TGP exports dropped substantially andwere only being partially offset by increased flows on TETCO.All other U.S. exports out of Waha, AZ, and SoCal wereunaffected. NGI regrets the error.