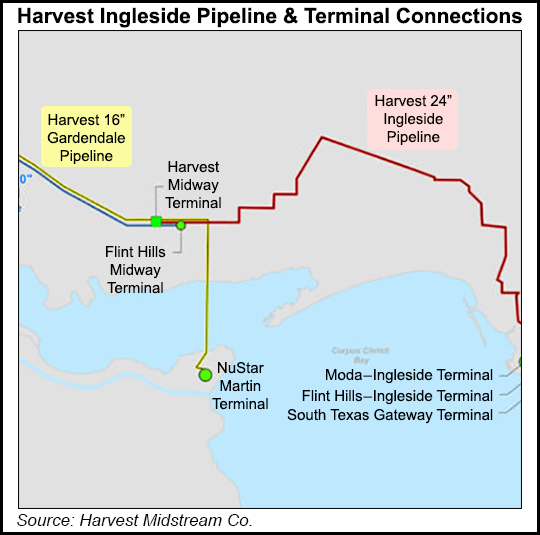 “As we continue to build capabilities to provide our customers growth potential, we look forward to being able to announce new successes in the region,” said Harvest CEO Jason Rebrook.

The 24-mile, 24-inch diameter Ingleside Pipeline was completed in June, bringing online 600,000 b/d of capacity. Up to 380,000 b/d of crude is supplied by existing Harvest Eagle Ford pipeline systems. The pipeline originates at the Harvest Midway Terminal, which is expected to begin full operations by early October. The system connects to multiple oil export terminals in South Texas, including the Flint Hills Resources Ingleside Terminal and the South Texas Gateway Terminal developed by Buckeye Partners LP.

Once complete, the Midway terminal would have the capacity to store more than 10 million bbl. The initial build-out is to include 200,000 bbl of crude storage, as well as measurement and pumping infrastructure capable of 25,000 bbl/hour.

The Energy Information Administration (EIA) said this week that after setting a record in February, U.S. oil exports declined over four consecutive months amid the shocks of the coronavirus pandemic. Exports fell to 3.6 million b/d in March and to 3.1 million b/d in April before declining to 2.9 million b/d in May. Exports then declined to 2.8 million b/d in June — 347,000 b/d lower than the June 2019 level.