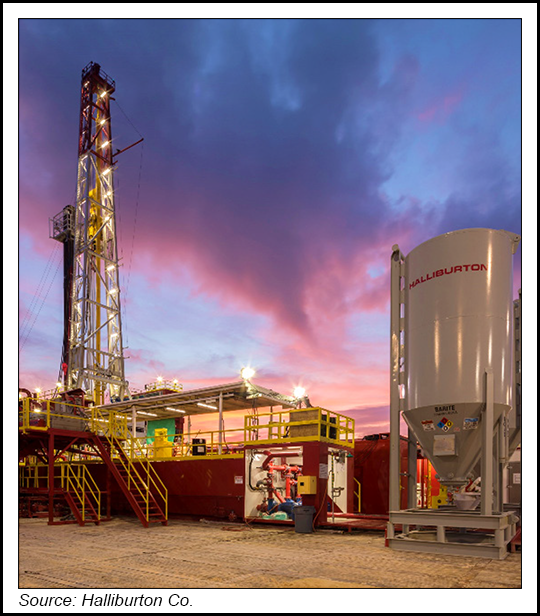 Miller helmed a conference call with analysts to discuss third quarter results, noting the Houston-based oilfield services (OFS) giant is using the technology honed in U.S. land and in the offshore to expand the overseas businesses.

Activity usually begins to slow in the third quarter through the end of the year as capital budgets often are weighted to the first six months. Not so this time, Miller said.

“We are certainly not seeing budget exhaustion,” he told analysts. “We remain sold out through the end of the year and into next year…The market is strong and activity remains strong.”

The inbound customer inquiries for services are “a mix, but it may be a little stronger toward larger companies” versus private exploration and production (E&P) companies, Miller said. Larger E&Ps “want to be certain they have equipment for 2023.

“I expect that in North America, the more you work, the more you produce,” which means more OFS opportunities. While some customers want term contracts, Halliburton has “flexibility around pricing because…I think it’s pretty clear to us that 2023 remains extremely tight, both from an equipment standpoint, repair parts standpoint,” Miller said.

“We’re very encouraged about the outlook for 2023 in North America.”

North America revenue grew almost 9% sequentially and was up 63% year/year, as both drilling and completions activity improved throughout the quarter.

“Looking into 2023, I see continued growth,” Miller said of North American activity. “The inbounds for calendar slots are stronger than I’ve ever seen at this point in the year. More important, I see increased demand for a limited set of equipment and an environment where technology and performance are increasingly valued. All perfectly set up for Halliburton to maximize value in North America.”

International revenue also climbed, up 3% sequentially as activity improved in Latin America and the Middle East, which more than offset an exit from Russia. Halliburton long has focused on North America, where it is the No. 1 completions expert. Of note, however, third quarter results “generated similar incremental margins in both international and North America markets,” Miller said.

Many global energy executives have repeatedly warned that natural gas and oil supply “remains fundamentally tight due to multiple years of underinvestment,” the CEO told analysts. “This tightness is apparent in historically low inventory levels, production levels well below expectations and temporary actions,” such as the Biden administration’s decision to pull oil from the U.S. Strategic Petroleum Reserve.

“Against tight supply, demand for oil and gas is strong, and we believe it will remain so,”
Miller said. “While broader market volatility is clear, what we see in our business is strong and growing demand for equipment and services.

“There is no immediate solution to balance the world’s demand for secure and reliable oil and gas against its limited supply. I believe that only multiple years of increased investment, and existing and new sources of production will solve the short spot.”

Effectively solving the short energy supply is through “conventional and unconventional drilling, in deepwater and shallow water, new and existing developments in short- and long-cycle barrels. All of it…Increased supply will be measured in years, not months.”

Improvements were partially offset by decreased drilling services in Norway, and decreased wireline services in the Gulf of Mexico.

Both divisional results were negatively impacted by the wind down and sale of the Russian operations.