Halliburton Co. CEO Dave Lesar made clear Wednesday that the slowdown in the U.S. and Canadian drilling market is only “transitory,” and the company will sit it out before cutting prices to capture new business. 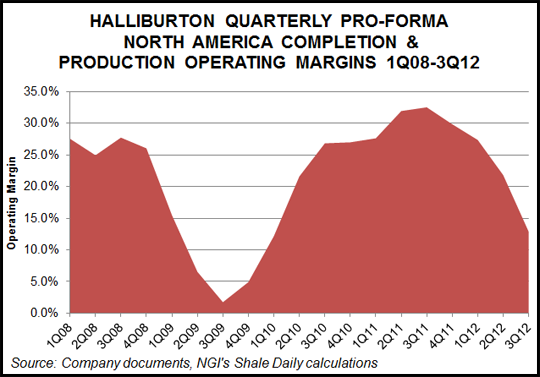 “In North America, we will not chase the transactional market as we would typically have done, but will instead idle our equipment,” he said during a conference call. Lesar and his management team spoke with energy analysts about the company’s performance in 3Q2012.

The world’s No. 2 oilfield services firm reported that profits fell from a year earlier in part because of inflated raw materials, as well as a sharp hit from the decline in onshore drilling, which likely won’t accelerate until next year.

“Our North America revenues were down 5% compared to the prior quarter as a result of the lower U.S. land rig count, contract renewals that result in lower stimulation pricing and activity disruptions associated with Hurricane Isaac,” Lesar said. “The U.S. land rig count declined sequentially by 68 rigs, or approximately 4%, as operators continued to decrease their gas-directed activity.

“The oil-directed rig count was up 44, or 3%, this quarter as customers continue to shift their budgets toward basins with better economics. However, this increase was insufficient to offset the 18% reduction in gas rig count.”

The rebound in Canadian activity from the spring breakup also was “significantly less than industry expectations,” said the CEO. Compared with 3Q2011 levels, Canada’s rig count fell 26%, or by 116 rigs, and activity levels are likely to remain “subdued” through the end of the year.

Strategy and Corporate Development chief Tim Probert explained what Halliburton is seeing in the U.S. onshore.

“If you just kind of look at, say, the Permian, the Eagle Ford and the Bakken together, those three basins now represent about 50% of the total rig count in the U.S. And you look at the Marcellus, the Barnett, the Haynesville, they’re only about 10% of the total rig count today and down about 50% since the beginning of the year. So you can see [that] the greatest pressures come from that. It’s not to say that any basin is immune right now, but basin by basin, there are different pressures.

“Dry gas, the rig count declines have stabilized there in fact. Wet gas is still coming down and so if you kind of look at the wet gas, dry gas and liquids, the former are the most impacted. So I think I would say that we’re starting to see some signs of a bottom.”

Probert said “the best sign that you ever see is when you see people, small firms operating at…breakeven. We’ve certainly seen some indications of that. That usually is the best indicator that pricing is starting to stabilize…”

The “pricing issues that we have today are primarily around stimulation…Anything that directly touches frack may have a little more pressure than those things that don’t touch frack. So I think the first point is that there is a real opportunity to pull through elements, which do not today have significant pricing pressure.”

Halliburton had a “headwind of approximately 600 basis points in our North American business” in 3Q2012, which Probert attributed to the guar costs. However, “customers have reined in their spending in the back half of the year, resulting in a decline of 172 rigs since the beginning of the year. Spending reductions have been more concentrated in large cap public companies since the end of the second quarter.” The large caps “are indicating to us a return to historical levels of activity in the first quarter as 2013 budgets get underway.”

McCollum explained to analysts that when they are thinking about Halliburton’s “normalized margins,” the U.S. numbers “right now…aren’t as far off as I think that the average margin indicates…We’ve described that guar is about 600 basis points of margin impact on us. When you eliminate that, that comes back to us substantially. We’re back above 20%. We also think that we probably lost a little under 100 basis points of margin this quarter just on activity and mix as a result of the declining rig count over the course of the quarter. And so it doesn’t take that much movement for us to sort of begin to threaten those normalized margins as we’ve talked about them with some repair on the market.”

It’s not all just a drop in rig activity, however. Drillers are becoming more proficient — and more efficient — at hitting their targets.

“I think the rate of drilling efficiency in the second half of the year has probably exceeded expectations,” he said. “And as a result of that, we’ve seen essentially this construct of many companies essentially running at a budget as we glide in toward the end of the year…That, clearly, is contributing to the slowdown. I think the indications we are getting clearly is that we will see that increase as we get into 2013. I don’t think we’re naive enough to think that it happens on — in the first week of January because it won’t. So it will be a spaced event as we go through the first quarter…”

Across North America, said Lesar, “we have seen customers curtail spending compared to the first half of the year and believe they will continue to decrease activities to operate within their capital budgets for the remainder of 2012. Couple this with expectations that our customers will take significantly more holiday downtime than prior years, this could have an even more-than-normal negative impact on the rig count as we approach year-end.”

“We’ve also seen increased pricing pressures in the oil and liquids markets as we renew existing simulation contracts and win new work,” noted Lesar. “The continued migration of hydraulic horsepower into the oil basins has resulted in these areas being in especially crowded place for stimulation equipment today, with the natural outcome being overcapacity and pricing pressure.

“We expect this pricing pressure to persist through early 2013 as we renew our existing contracts. But in response to giving fracturing price concessions, we have negotiated pull-through of additional product lines. Several smaller stimulation companies have recently reported losses or breakeven levels of profitability. This has historically been a good indicator that the market is close to or at the bottom of spot pricing deterioration.”

Halliburton’s stimulation fleet remains “highly utilized…as we negotiate fracture contract renewals, and we’ve been able to increase our percentage of 24-hour crews. Many of our competitors simply do not have the infrastructure in place to meaningfully grow their 24-hour operations.”

The “next couple of quarters” are expected to be “pretty bumpy,” said the CEO. “While we have an understanding of the price impact of our contract renewals, there remains significant uncertainty around customer activity levels throughout the fourth quarter, both in terms of rig programs and extended holiday downtime. Activity may be further impacted by the muted recovery in Canada by typical weather-related delays and by customers’ decisions to drill but not complete wells. At this point, we believe the downside pressure to the fourth quarter outweigh in the upside, and we will take the necessary steps to adjust our operations.”

Halliburton has been “running our people and equipment flat-out for the past several years. So if this short-term drop in activity happens, we will not chase the lower price transactional work to keep our crews busy or to gain market share. This is something we traditionally would have done. We will instead stack our equipment and reduce labor costs by working with our employees to minimize the temporary impact of these disruptions.”

The company is taking a different approach because management believes “these issues are transitory and we do not want to take the risk of lowering the pricing baseline for a problem that we will expect to go away in a couple of quarters, or to have our customers believe that such pricing would be the new normal going forward.”

“However, to return to the utilization levels we saw in 2010 and 2011, the industry will require some degree of recovery in the natural gas market.”