Halliburton Co., the largest pressure pumping operator in the Lower 48, stacked hydraulic fracturing equipment throughout the second quarter and will continue to do so where management does not see acceptable returns, CEO Jeff Miller said Monday. 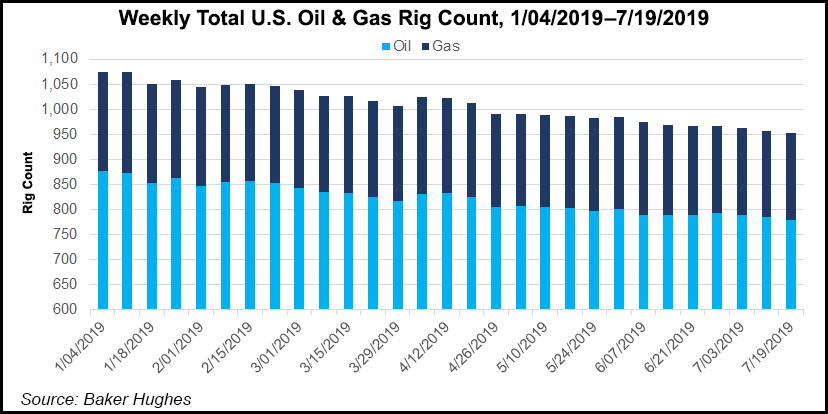 In years past, Halliburton had aggressively pursued market share during a pullback by the E&P sector. Now it’s willing to give an inch or two.

“The pressure pumping market remains oversupplied, and we’re not afraid to reduce our fleet size as it contributes to righting the supply and demand balance,” Miller told investors. “This may impact our top line in the near term, but it saves labor and maintenance costs, and I believe will lead to better margins.”

During the second quarter, Halliburton reported a “modest improvement in hydraulic fracturing activity,” in NAM, “which manifested in mid-single, single-digit increases in both completed stages and pumping hours during the quarter.”

Pricing in the United States and Canada remained stable, but “we were able to improve margins by reducing costs and maximizing our equipment utilization. This is what I mean when I tell you that we will control what we can control and manage our business to perform well in any market conditions…”

The “activity cadence” by NAM E&Ps through the rest of this year “will be dictated by their focus on remaining within announced capex budgets and generating free cash flow. Some will slow down, as they’ve been very efficient, and we’ll scale back completion programs for the rest of the year to stay within their capex guidance.”

Because of the differing behaviors between the cost-conscious operators, “we expect that activity in North America will be slightly down in the third quarter.”

The slowdown is likely to be “more pronounced in gassier basins due to persisting lower gas prices.”

As its E&P customers’ behavior has changed, Halliburton now sees “no reason to invest in growth when it comes at the expense of returns,” Miller said. “The capital that we do spend this year in the U.S. is mostly directed toward increasing efficiency and refurbishing equipment both with line of sight to improving returns and cash flow.”
Halliburton also is reducing its operating costs. For example, the NAM organization has been restructured, with “several layers of management” gone.

“The restructuring has changed our cost profile certainly, but it’s also increased our market responsiveness,” said the CEO.

In addition, Halliburton is partnering with its supply chain and logistics organization to reduce input costs. It continues to “evaluate cost reduction opportunities across the company and we will manage and right size our North America operations for the market environment.”

Miller said the unconventionals market in NAM today is in an “interim maturation phase represented by the pivot from scarcity to abundance.” What will differentiate OFS firms will be technology, he said.

“Customers are required to maximize production for every capex dollar they spend, and technology that can improve well productivity will be key to their success.”

Between April and June, the commodity markets “navigated some choppy waters,” Miller said. “On the one hand, there are global oil demand concerns largely attributed to the uncertainty surrounding the outcome of the U.S.-China trade talks.

“On the other hand, oil prices have recently been buoyed by the supply side reaction” to the extension of production cuts to March 2020 by the Organization of the Petroleum Exporting Countries and their allies and geopolitical turmoil.”

Overall, said Miller, the NAM business demonstrated solid performance between April and June, delivering 2% sequential revenue growth despite the declining rig count. International revenue was the star, however, up 6% sequentially.

“I’m excited by what I see internationally,” Miller said. There’s a “broad-based recovery across multiple geographies, primarily driven by land and shallow water operations. Our business in the North Sea is extremely busy both in the Norwegian and UK sectors…Currently we are sold out of drilling and wireline tools in the North Sea…We see similar dynamics in the Asia-Pacific markets.”

More offshore growth is anticipated. In June, the year/year change in the offshore rig count was up for the 12th consecutive month and appears to be gaining momentum,” Miller said. He cautioned that most of the large offshore projects recently sanctioned or awarded have a 2020 or 2021 start date.

Reported operating income was $303 million during the latest quarter, down sharply from $789 million in 2Q2018. NAM revenue increased 2% sequentially to $3.3 billion.