Halliburton Co. confirmed Thursday that base salaries and bonuses for senior management have been reduced, while annual pay increases for the entire workforce have been suspended to contend with the current market decline. 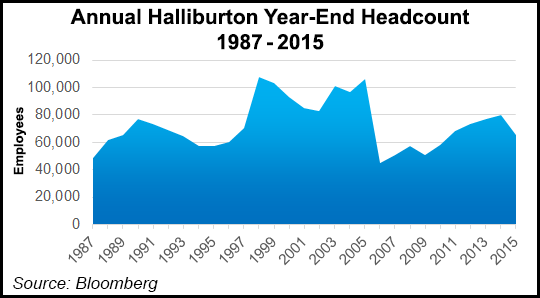 The Houston-based operator “remains prudent in its cost savings efforts,” and has implemented several initiatives, including:

Base salary reductions implemented in 2015 for executive and senior management are to remain in effect. Bonuses for management have been reduced sharply or eliminated, and annual pay increases for the entire workforce have been suspended.

How much in savings the reductions in salaries, bonuses and pay increase would bring to the company was not detailed, nor when they could be reinstated.

However, Halliburton plans to continue to match dollar-for-dollar on the first 4% that employees contribute to their 401(k) retirement and savings plans, as well as 50 cents on the next 2%, for a total match of up to 5%. However, the company has suspended its 4% discretionary contribution to the plans.

“Halliburton believes taking such measures was necessary to best position itself in the ongoing market and lower costs for its customers,” Mir said.

Anadarko Petroleum Corp. also said Thursday it is laying off about 1,000 people, or 17%, of its staff. Most of the job cuts are from headquarters in The Woodlands, north of Houston, but staff reductions also are at regional offices. No specific job titles were announced, but cuts are across the organization, a spokesman said.

Overall capital spending this year has been reduced by half from 2015, with U.S. onshore spend to be reduced by 70% (see Shale Daily, March 1).

Given the downcycle, Anadarko has been “carefully evaluating what our staffing levels should be.”

The OFS sector has taken the brunt of hits since oil prices crashed in late 2014, as global workforces have been cut and prices reduced to help ailing exploration companies.

No. 1 OFS operator Schlumberger Ltd. reduced its global workforce by another 10,000 in the final months of last year following big job reductions through 2015 (see Shale Daily, Jan. 22). Weatherford International plc, the No. 4 OFS, also continues to lay off people, with another 6,000 expected to be gone by the end of June, bringing the total number of job losses globally at about 20,000 (see Shale Daily, Feb. 5).

The U.S. Energy Information Administration reported an injection of 66 Bcf The result was lower than expected and helped sustain a rally LNG volumes ticked back up to 6.0 Bcf Natural gas futures soared for a second consecutive day on Thursday after a light storage build provided a positive surprise and liquified natural gas (LNG)…