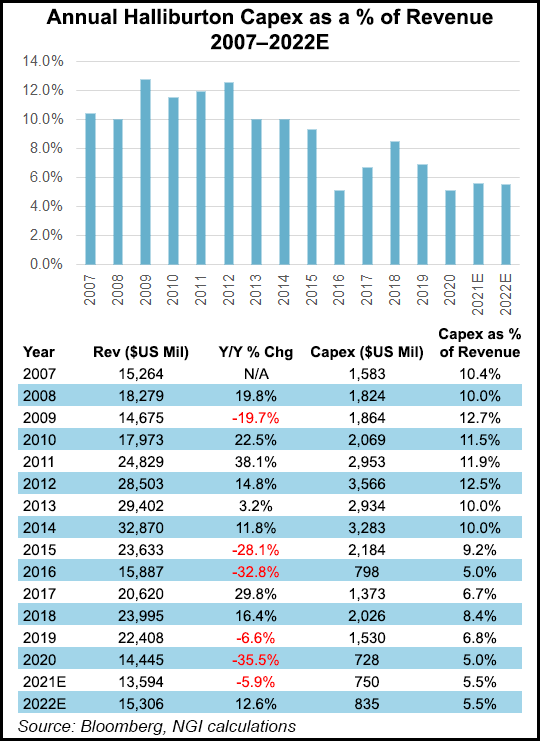 CEO Jeff Miller helmed a conference call on Tuesday with his management team, noting that the largest completions specialist in North America took “advantage of the recovery and completions and drilling activity” in the final period of 2020.

Management believes “that the worst is behind us, and we look to the future with optimism. Oil prices are back to pre-pandemic levels, driven by global vaccine distribution and unfolding demand recovery.”

Miller said he was “optimistic about the activity momentum I see in North America and expect international activity to bottom in the first quarter of this year. I am also encouraged by the growing pipeline of international customer opportunities and the unfolding global activity recovery.

“I believe our strategic priorities will allow us to continue generating industry leading returns and strong free cash flow and solidify Halliburton’s role in the unfolding energy market recovery.”

The positives have resulted from a declining oil production base and “discipline” to hold the line on output by the Organization of the Petroleum Exporting Countries and its allies.

“However, some caution is appropriate due to the surge in Covid-19 infections globally and the expected gradual return of spare production capacity,” Miller said. “As oil demand recovers, we expect to see favorable market dynamics and the beginning of a multi-year energy upcycle.”

While international energy companies are looking to grow market share, the North American exploration and production (E&P) operators “will increase spending from current levels that will take a more disciplined approach to growing production in the future.

“We believe that the overall cost and environmental impact of producing oil and gas will continue to decline due to innovation and technology adoption,” Miller told analysts. “As a result, oil and gas will remain a critical and significant component of the energy mix. I expect that our gains achieved in 2020 including service delivery improvements, structural cost reductions and capital efficiency are firmly in place and sustainable.”

Look to the second half of 2021 for a “low, double-digit increase in international activity year/year…Halliburton is well positioned to benefit from this increase. Let me be clear: our target is profitable growth against a tough activity backdrop in 2020.”

The North American division slimmed down considerably over the past year, with people laid off, facilities and digital offerings deployed internally and for customers. The changes were demanded by Covid-19, but customer consolidation is likely to continue, Miller said.

“We expect most operators will remain committed to a disciplined capital program for the full year, provided that the impact of the pandemic moderates, economic activity continues to increase and oil prices remain solid.

“I am optimistic that our customers will sustain activity in order to hold their production flat to 2020 exit levels with completion spend outpacing drilling.”
The company also is continuing to see “margin improvement even without improved pricing,” Miller told analysts. “Completion stage counts increased in the oil basins,” even though they were “modestly lower” in the final three months in the natural gas basins.

The Lower 48 rig count has “recovered from its August 2020 low of 230 rigs,” Miller said, but “it is still 60% below the pre-pandemic levels.” During the fourth quarter, the privates and small exploration and production (E&P) operators “added the most rigs, while large E&Ps and majors moved more slowly.

“We expect completion activity in North America to continue improving in the first half of 2021 as commodity prices remain supportive and customers complete their backlog” of DUCs, aka drilled but uncompleted wells.

Halliburton finished 4Q2020 with revenue of $3.2 billion, a 9% sequential increase, while adjusted operating income was up 27%.

Net loss was $235 million (minus 27 cents/share) in 4Q2020, versus a year-ago loss of $1.65 billion (minus $1.88) and a sequential loss of $17 million (minus 2 cents). Halliburton recognized $446 million of one-time impairments and other charges in 4Q2020, primarily related to a “contemplated structured transaction for its North American real estate assets” as infrastructure is downsized.

Drilling and Evaluation revenue was up 2% sequentially to $1.4 billion, while operating income rose 11% to $117 million, primarily from higher drilling-related services in North America and Brazil, increased wireline activity in North America and Latin America, higher fluids sales in Asia Pacific and Guyana, and increased software sales across all regions.

Latin America revenue rose 12% from 3Q2020 to $426 million, primarily from increased pressure pumping and wireline activity in Argentina, and activity increases in multiple product service lines in Colombia and Ecuador, higher fluids sales in Guyana and drilling services in Brazil. The positives were partially offset by reduced activity across “multiple product service lines” in Mexico.