Houston-based Halliburton Co., the largest pressure pumper in the Lower 48, no longer is seeing a “flight to quality,” but a flight to anywhere, as customers deal with the Covid-19 pandemic and low commodity prices, CEO Jeff Miller said Monday. 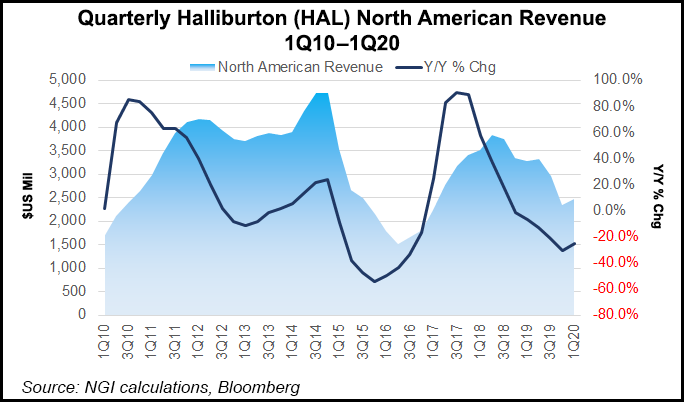 Halliburton and its deep-pocketed OFS peers have long stressed their ability to take more market share, basically a “flight to quality,” as they muscle in their broad palate of offerings and world-class technologies. However, exploration and production (E&P) customers today are simply attempting to fly safely out of the morass as they are able, cutting as much from their capital expenditure (capex) budgets as they can.

Fracturing (fracking) services, Halliburton’s forte in the Lower 48, are taking a big hit as E&Ps shut-in wells and lay off crews.

“I fully expect we will see a flight to quality, but at this very moment, there’s just not a lot of thought going into anything other than reducing capital spend,” Miller said. “In that kind of environment, there isn’t much flight because there’s not a lot of new things being added…We maintain that front and center and fully expect that after the industry’s able to take a collective breath…we will see the same flight to quality that we have always seen.”

Regarding its North American E&P customers, Miller said they are “an incredibly aggressive group of competitors…They’re going to each aggressively act independently. The dialogue with them at least with me has been disappointment over the near term, but all…looking ahead to what it looks like on the other side…

“The dialogue is always that, ”we’re going to need to be super competitive and work with Halliburton when we get to the other side.’ We’ve had many discussions about what does the recovery look like? How do we implement the things we’re talking about on the other side? So, that’s generally been a consistent conversation with all customers.”

Mirroring Schlumberger commentary during the 1Q2020 conference call last Friday, he said the United States should see the biggest contraction during the second quarter, with Lower 48 “frack holidays” likely.

“It’s moving so quickly that our view on the U.S. is that we see dramatic reduction in the second quarter, though I’m not able to call the precise number or timing,” Miller said. In the North American onshore, “frack holidays” are a sure thing. For overseas operations, more weighted to the deepwater, it’s a different story.

“A frack holiday is a lot different than taking a deepwater rig holiday,” he said. “They just happen at different paces, and so we’ve got a view of slowing activity internationally. It doesn’t necessarily slow with the same pace,” as deepwater drillers cannot “pick a date…it’s at a point in time.”

North American capex already had retrenched in 2019, which led Halliburton to restructure the playbook, prioritizing market share over returns.

“We clearly had momentum from these efforts coming into 2020,” Miller said, with more efficient pumps in the fracturing fleet and key technology gaps closed. “Unfortunately, as we enter this downturn, we will need to make some painful decisions and I am aware that this will cause great difficulty for our impacted employees.”

To begin with, capex has been cut by roughly half from 2019 to $800 million. Around $1 billion is to be reduced from annualized overhead and other costs through the second half of the year.

“To accomplish this, we are streamlining our global and regional headcount, consolidating multiple facilities and removing another layer of operations management in North America,” Miller said. “We are cutting our technology budget by 25%. We have stopped discretionary spend across the business, and we have eliminated salary increases for all personnel this year, and I and other members of the executive committee have taken pay cuts.

“Additionally, we will make variable headcount adjustments and rationalize our assets to be in line with the activity reductions we anticipate. As we look to reduce our own input costs, we’re also renegotiating prices and terms with our suppliers…”

More actions could be taken, depending on how the market evolves.

“If I’ve learned something from all of the downturns I’ve been through in my career, it is that the industry always bounces back,” Miller said. “This downturn, although the most severe we’ve seen in a generation, will be no different.”

The duration of the pandemic’s impact on demand, as well as the pace of subsequent recovery, is not predictable, said the CEO.

“At a minimum, we expect the decline in activity to continue through year-end. We’ve not experienced anything like the impact of the Covid-19 pandemic before. Under adverse market conditions, we know what buttons to push and what levers to pull, and we are doing so with swiftness and resolve.”

“The market in North America is experiencing the most dramatic and rapid activity decline in recent history,” Miller told analysts. “Our customers continue to revise their capital budgets downwards, as they swiftly adjust spending levels in response to the lower commodity price.”
Halliburton’s main customers, North American E&Ps, have to date cut capital expenditures (capex) by around 40% on average, but the OFS operator sees spending reductions now trending toward 50% lower than in 2019.

“Since mid-March, the U.S. land rig count has fallen 34% and is expected to continue declining from here, with prices at the wellhead near cash break-even levels,” Miller said. “We expect activity in North America land to further deteriorate during the second quarter and remain depressed through year-end impacting all basins.”

The international outlook also is less optimistic because of the collapse in oil prices and activity interruptions from the pandemic.

“Covid-19 had minimal impact on our international operations in the first quarter, but the second quarter will be different,” Miller said. “We are seeing restricted movements within countries, quarantine requirements for rotational staff, logistics delay due to third-party personnel reductions and in some cases, entire country closures.”

Beyond the near-term headwinds, some international customers are reducing capex, deferring exploration and appraisal activity, and looking to cut costs on major ongoing projects. International capex is forecast to be off by around 10% from 2019, in part from the recent agreement by the Organization of the Petroleum Exporting Countries (OPEC) and its allies.

“We anticipate that the least affected markets will be the OPEC countries in the Middle East, while offshore Africa and Latin America may see double-digit declines this year,” Miller said.

“Given the oversupply of fracturing equipment in North America pricing levels in this market, we’re already at historical lows coming into 2020. Internationally, the pricing increases we were starting to see will take a pause.”

One area where Halliburton has seen improvement in the downturn is internal and customer acceleration toward adopting digital technologies.

“The current environment really accelerates, or allows us, to really test the art of the possible, with respect to how we work,” Miller said. “Digital is front and center. I can see when we embrace that wholeheartedly as opposed to incrementally, we’re able to do things quite differently in terms of less people, less footprint…

“This whole period is awful on a lot of different fronts, but I am an optimist. I think we take advantage of an opportunity; it’s an opportune time to say, ”okay, forget everything you thought you knew.’”

Over the last month or so Halliburton has seen a “meaningful uptake”in demand for cloud services and “things that would allow, not just working remotely, but…the same kind of cost removal” to help E&Ps reduce their overhead. With more E&P customers now working from home, the move to cloud technology has “accelerated the demand for that…Obviously, necessity is the mother of demand creation in that regard, but it’s quite encouraging to me…”

Halliburton isn’t changing its playbook in the current environment, as returns remain the priority. However, “It all will be a challenge,” said the CEO. “But we’re not chasing market share; we don’t intend to. I don’t think that the dynamics have changed — the things that formed our view on our strategy for North America haven’t changed the bigger full-cycle type things.

“So therefore, we’re going to manage our costs. We’re going to look at the returns on equipment, the best utilization of equipment,” but the view is to the long term. “Flight to quality may result in more market share at some point, but trust me that…we don’t go to market thinking about that.”

Amid the upheaval imposed by the coronavirus pandemic, 2020 global energy consumption in the transportation sector is forecast to decrease 10% year/year, led lower by an 11% drop in oil consumption, the International Energy Agency (IEA) said Thursday. This decline is expected to account for nearly two-thirds of the total expected year/year pullback in oil…