Halliburton Co.’s operating income slumped 9% sequentially in the third quarter on a “softening” market for North American completions, but beyond the holidays, as customers reload budgets, the market should improve, CEO Jeff Miller said Monday. 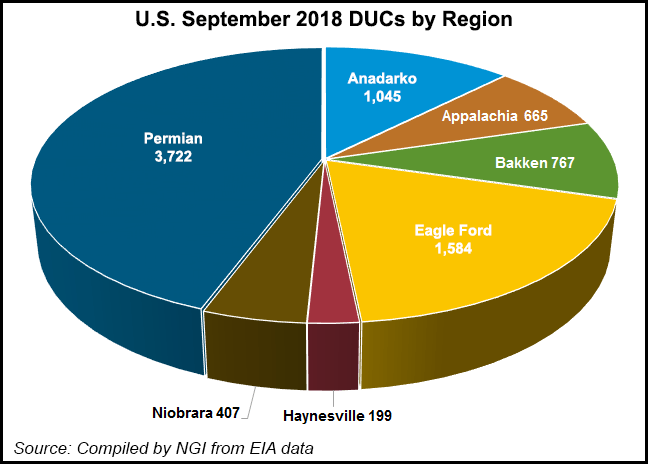 The No. 1 fracture specialist in the United States and Canada is facing “short-term challenges” in North America, exacerbated through the final three months of this year, as many customers plan to take “extended breaks…some before Thanksgiving,” with activity decreasing overall in the last six weeks.

Halliburton had already cut its earnings guidance twice this year, and it did so again on Monday, with fourth quarter guidance now of 37-40 cents/share, roughly half of what it had forecast in early July. The culprit was pressure pumping, as producers waylaid a record number of drilled but uncompleted (DUC) wells in the United States and Canada.

“As it played out, it was a challenging quarter for the services industry in North America,” Miller said. “We didn’t see the typical growth we expect in pressure pumping activity in the third quarter. This negatively impacted pricing and the efficient use of our equipment as customers responded to budget limitations and offtake capacity bottlenecks.”

“As expected, North America revenue declined as a result of market softness,” Miller said. “Despite the near-term temporary challenges…the macro outlook for the oil and gas industry is the strongest it has been in four years. The combination of economic growth, affordable fuel prices and demand for petrochemicals sets the stage for continued positive trends.”

Since the recovery from the oil price debacle in late 2014, the talk has focused on the supply side of the equation, he noted. “The fact is, we have more clarity today regarding the sources of supply and their limitation. Temporary issues affecting North America production, the spare capacity limitations in the Middle East and Russia and significant underinvestment” outside the United States “are reflected in today’s strong commodity prices.”

Stronger oil and gas prices should incentivize customers to begin unlocking territory beyond the core fields on higher prices, too. However, in the near term, a combination of takeaway capacity constraints in the U.S. onshore and exhausted 2018 budgets have led to less demand for completion services.

“This cycle is shaping up to be a marathon, not a sprint,” Miller said. Customers have indicated that “budget exhaustion and seasonal issues will predictively impact activity” during 4Q2018. “We will do what a rational business would do in this situation. We will work to keep our equipment utilized in the short-term when it makes business sense to do so, and we will take steps to position ourselves for a better 2019…

“I believe that these headwinds are temporary. And I’ll draw on the arsenal of measures available to me to manage through this brief dislocation in the North America market.”

CFO Christopher Weber said results for the fourth quarter will decline in the completions and production division, primarily in the North American land market, “where we expect the activity level of our pressure pumping customers to decrease by a low double-digit percentage…This will mean lower utilization for our equipment, less efficient operations and continued pricing pressure…” Drilling and evaluation results should improve slightly primarily from typical year-end sales.

The final quarter of 2018 “will be the bottom in North America land,” Miller said. “I believe this because I see it. I’m already seeing demand from our customers for 2019. They’re eager to get back to work. I hear it. I’m hearing this from our business development organization, who are busy responding to inbound 2019 demand. I feel it. I’m feeling customer urgency come back as operators want reassurance our crews will be back out working for them when budgets reset and they restart their full completions programs.”

No two basins in the United States are alike, though, and the slope of the activity ramp will vary, Miller said.

“In the Northeast, our customers have already met their 2018 production targets. They’ve slowed down activity and they’re now expanding their processing facilities. Natural gas prices have recently surpassed $3/Mcf and are forecasted to stay there throughout the winter. Pipelines are coming online and starting to move gas out of the Northeast and into more premium priced markets. That will lower differentials and improve economics, allowing our customers in the Northeast to do more with their budgets next year.”

Operators in Colorado’s Denver-Julesburg (DJ) Basin also are awaiting more pipeline capacity to improve differentials. “While our DJ customers have significantly slowed down completions activity at the moment, we believe that new pipelines arriving in 2019 will spur them into action again,” Miller said.

Meanwhile, the Permian Basin is seeing myriad responses to capacity constraints, as many of the large customers have firm takeaway and their completions continue, while others have shifted their focus to other basins. For those without capacity or other options, the DUCs are mounting.

Customers are also cutting back In the Eagle Ford Shale as budgets dry up for 2018, while in the Midcontinent and the Rockies, operators are staying within their cash flow obligations for the year.

“However, our customers in all these basins are preparing to start 2019 afresh on a higher note,” Miller said.

On the technology front, Halliburton during 3Q2018 released, among other things, the iCruise Intelligent Rotary Steerable System, a breakthrough technology that it promises will deliver faster drilling, more accurate steering and longer laterals. The company also unveiled Prodigi AB Service, a first-of-its-kind offering that introduces automation to hydraulic fracturing to achieve a lower cost/boe.