Once the cash cow for its operations, the North American oil and gas business is losing its shine for Halliburton Co., which plans to look overseas for more revenue, CEO Jeff Miller said Monday. 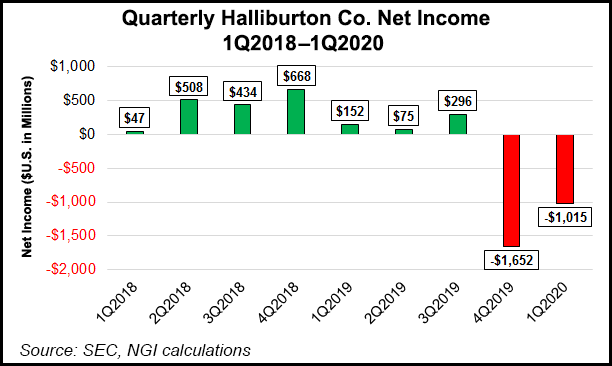 Long the No. 1 pressure pumper in North America, Halliburton was first out of the gate among the major oilfield services (OFS) operators in issuing second quarter results. Baker Hughes Co. is set for Wednesday, Schlumberger Ltd. on Friday.

Miller shared a sobering outlook during the quarterly conference call for anyone expecting North American oil and gas activity, particularly U.S. land, to recover in the near term.

“As oil demand recovers, I expect the international business will continue to be a more meaningful contributor to our revenue going forward,” Miller told investors. “North America production is likely to remain structurally lower in the foreseeable future and has slower growth going forward.”

Halliburton historically has generated most of its revenue in North America. However, with the pandemic and a massive energy transition underway to move from fossil fuels toward more alternatives, the operator is changing course.

As the effects of the pandemic cut into the economy, Halliburton in March furloughed about 3,500 employees. Last month, it clipped the dividend by 75%. More cost reductions underway should be completed by the end of the third quarter, Miller said, mostly focused on global operations and real estate holdings.

So far, so good. The OFS giant in 2Q2020 managed to achieve $456 million in free cash flow, double Wall Street estimates, and it is charting a “fundamentally different course,” Miller said.

“Halliburton’s second quarter performance in a tough market shows we can execute quickly and aggressively to deliver solid financial results and free cash flow despite a severe drop in global activity,” he said. “Our results demonstrate a significant and sustainable reset to the power of our business to generate positive earnings and free cash flow.”

Halliburton recorded a $2.1 billion impairment for the second quarter as it wrote down the value of its fracturing assets and real estate.

International revenue was off 17% sequentially, also because of reduced pressure pumping and drilling activity in every region. Latin America revenue fell 33%, with the biggest drilling reductions in Argentina, Colombia and Brazil, as well as lower software sales in Mexico.

There were “market headwinds,” Miller said, but the margin performance of the Completion and Production (C&P), as well as the Drilling and Evaluation (D&E) divisions, along with the positive cash flow, “show the speed and effectiveness of our aggressive cost actions…The strategic actions we are taking will further boost our earnings power and ability to generate free cash flow as we power into and win the eventual recovery.”

Even with the downturn in business, the technology engine continued to perform.

Among other things, Halliburton and TechnipFMC during the quarter introduced Odassea, the world’s first distributed acoustic sensing solution for subsea wells. Halliburton is providing the fiber optic sensing technology, completions and analysis for reservoir diagnostics.

Halliburton also is advancing its digital capabilities under a new agreement with Microsoft and Accenture announced earlier this month, which would complete the move to cloud-based digital platforms.