A potential economic slump would be insufficient to correct the acute supply/demand imbalance currently facing the oil and natural gas markets, according to Halliburton Co. CEO Jeff Miller. 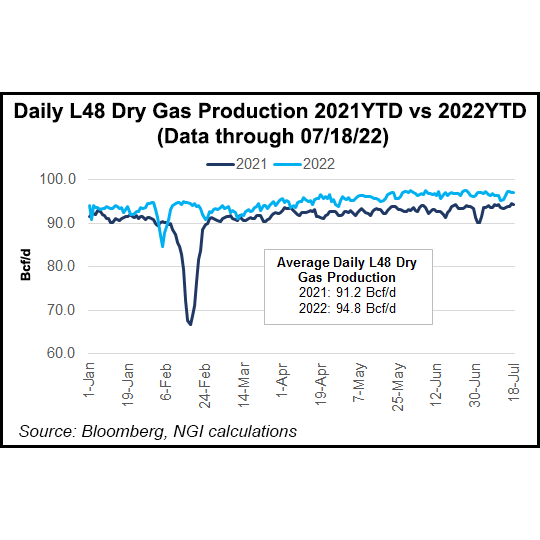 The CEO noted that actions taken by central banks during the second quarter to curb inflation are “raising concerns about a potential economic slowdown. Despite this near-term volatility, I believe the oil and gas market fundamentals still strongly support a multi-year energy upcycle.”

He highlighted that OPEC-plus spare production capacity and U.S. oil storage levels are at historic lows, and he said that the continued releases from the U.S. Strategic Petroleum Reserve would be “unsustainable.”

Although spending and production from North American operators are both on the rise, this may not be enough to meaningfully loosen the market, Miller indicated. He cited growth headwinds on multiple fronts, including environmental, social and governance (ESG) concerns.

In recent months, “Despite high commodity prices, operators remained disciplined because of investor return requirements, public ESG commitments and regulatory pressure,” he said. “In response, service companies invested for returns and did not overbuild.”

As a result of these trends, “Any economic slowdown will not solve the structural oil undersupply problem.”

‘All But Impossible’ to Add Capacity

Halliburton is the largest OFS provider in North America, a market which “remains strong, steadily growing, and all but sold out” in terms of equipment, Miller said. This is likely to remain the case through the second half of 2022, due to “service company discipline, long lead time for new fleets and supply chain bottlenecks for consumables.”

These constraints, even for diesel hydraulic fracturing fleets, “make it almost impossible to add incremental capacity this year,” Miller said.

Miller explained that Halliburton’s aim is “to maximize value in North America by focusing on cash flow and returns, not market share.”

A large chunk of that increase, however, is due to inflation, meaning it will not translate to a corresponding increase in natural gas production, said NGI’s Patrick Rau, director of strategy and research.

“U.S. dry gas production is only up 4% year-over-year through July 18, and that includes the impact of Winter Storm Uri in February 2021, which makes the 2022 figure look even higher,” Rau said. “Inflation is a big part of the lofty capex increase, and in fact may be the majority of it.

“Operators have yet to report 2Q22 earnings, but some of them noted inflation was running as much as 20% higher for 2022 during 1Q22 calls, and I imagine inflation has only gotten worse these last few months.”

Growth Across All Regions

Halliburton attributed the growth to increased activity across multiple product service lines in the Middle East, Argentina, Colombia, Australia, the Eastern Mediterranean, the UK, and Brunei.

“I expect the international markets will experience multiple years of growth, and I am confident that Halliburton is positioned to benefit more from this multi-year upcycle than ever before,” said Miller.

Improvement was also seen in wireline activity and cementing in Europe, Africa and the Commonwealth of Independent States, as well as pressure pumping services in Mexico and increased fluid services in the Caribbean.

“Partially offsetting these increases were seasonally lower software sales across international regions, as well as the impact of the wind down of our business in Russia,” the company said.

Halliburton took a $342 million pre-tax impairment charge related to its decision to exit Russia amid the war in Ukraine.

Halliburton reported revenue growth in each of its two principal operating segments.

Completion and Production revenue totaled $2.9 billion for the quarter, up from $2.05 billion in 2Q2021, while the segment’s operating income rose to $499 million from $296 million.

Drilling and Evaluation revenue, meanwhile, rose to $2.2 billion from $1.7 billion in the year-ago period, with operating income dipping slightly to $286 million from $294 million in 2Q2021.

Halliburton reported net income of $109 million (12 cents/share) for the second quarter, versus profit of $263 million (29 cents) in the year-ago period.