Halliburton Co. and Baker Hughes Inc. said they will fight Justice Department efforts to block their pending $34.6 billion merger, claiming government officials reached the wrong conclusion in assessing the transaction and charged the action is counterproductive in light of the challenges now being experienced by the global energy industry. 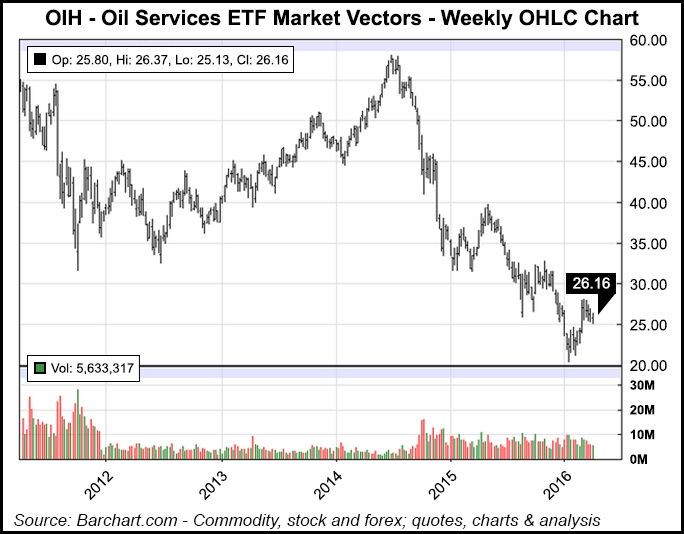 The Department of Justice (DOJ) on Wednesday filed a lawsuit to prevent the tie-up, which it claims would eliminate “significant” head-to-head competition. The proposed merger between the two Houston-based operators was announced in late 2014 but it has suffered problems almost from the start (see Shale Daily, Nov. 17, 2014). Among other things, the merger has failed to gain DOJ approval for various plans submitted by Halliburton to ensure the combination would overcome antitrust issues (see Daily GPI, Dec. 15, 2015).

“The proposed deal between Halliburton and Baker Hughes would eliminate vital competition, skew energy markets and harm American consumers,” said Attorney General (AG) Loretta E. Lynch. “Our action makes clear that the Justice Department is committed to vigorously enforcing our antitrust laws. In the days ahead, we will continue to stand up for fair deals and free markets, and for the American people we are privileged to serve.”

A hint of what was to come preceded the lawsuit on Monday when DOJ sued investment firm ValueAct Capital after it was disclosed that it bought $2.8 billion in stakes in both of the companies that was intended to help formulate merger strategies in violation of federal law (see Daily GPI, April 4).

The new lawsuit filed in U.S. District Court for the District of Delaware, where both companies are incorporated, alleges that the merger “threatens to eliminate competition, raise prices and reduce innovation” in the oilfield services (OFS) industry (U.S. v. Halliburton Co., No. 16-00233).

The acquisition would combine the No. 2 and No. 3 OFS companies in the world, “eliminating important head-to-head competition in markets for 23 products or services used for on- and offshore oil exploration and production in the United States,” DOJ said.

DOJ Assistant AG Bill Baer of the Antitrust Division said the transaction “is unprecedented in the breadth and scope of competitive overlaps and antitrust issues it presents. Halliburton and Baker Hughes are two of the three largest integrated oilfield service companies across the globe, and they compete to invent and sell products and services that are critical to energy exploration and production. We need to maintain meaningful competition in this important sector of our economy.”

During the DOJ investigation, Halliburton proposed to remedy the significant harmful effects of the transaction by divesting a mix of assets extracted from certain business lines of the two companies. However, according to the complaint, the proposed divestitures would not include full business units but rather would be limited to certain assets, “with the merged firm holding onto important facilities, employees, contracts, intellectual property, and research and development resources that would put the buyer of those assets at a competitive disadvantage.

“The proposed divestitures mostly would allow Halliburton to retain the more valuable assets from either company while selling less significant assets to a third party.” The complaint further alleges that the divestitures “would not replicate the substantial competition between the two rivals that exists today.”

Halliburton and Baker said they intend to “vigorously contest” DOJ’s efforts to block their pending merger.

“The companies believe that the DOJ has reached the wrong conclusion in its assessment of the transaction and that its action is counterproductive, especially in the context of the challenges the U.S. and global energy industry are currently experiencing,” the operators said.

The proposed merger “is pro-competitive and will allow the companies’ customers to benefit from a more flexible, innovative and efficient oilfield services company. The transaction will provide customers with access to high quality and more efficient products and services, and an opportunity to reduce their cost per barrel of oil equivalent.”

Early in the process, they noted, Halliburton proposed to DOJ a divestiture package “worth billions of dollars that will facilitate the entry of new competition in markets in which products and services are being divested. Both companies strongly believe that the proposed divestiture package, which was significantly enhanced, is more than sufficient to address the DOJ’s specific competitive concerns.”

The companies plan to demonstrate that the DOJ “has underestimated the highly competitive nature of the oilfield services industry, the many benefits of the proposed combination and the sufficiency of the divestitures. Once completed, the transaction will allow customers to operate more cost effectively, which is especially important now due to the state of the energy industry and oil and gas prices.”

Halliburton and Baker said they “look forward to a full, impartial judicial review of the pending transaction, including the sufficiency of the proposed divestitures. The merger partners previously had agreed to extend the time period to obtain regulatory approvals by April 30, as permitted under the merger agreement.

“If the judicial review extends beyond April 30, 2016, the parties may continue to seek relevant regulatory approvals or either of the parties may terminate the merger agreement.”

Evercore ISI analysts said if the merger is scuttled, Halliburton should be able to shake it off and even strengthen, but Baker may be in a more precarious position.

“Given the employee turnover (one private-equity executive told us he believes the next group of North American startups will be led by ex-Baker Hughes employees), the cannibalization of its equipment at the onset of the downturn, and the general disorder within the company, we believe standalone-Baker Hughes’ revenue growth and margin improvement would lag its peers when the upcycle resumes and likely means that Baker Hughes’ consensus estimates are stale and too high,” Evercore analyst James West said. “We view a low to mid $30s break price as the most likely scenario. Halliburton and Baker Hughes were basically trading at par prior to the deal announcement.”

Halliburton faces a $3.5 billion termination fee to Baker if it decides to end the merger plan, which equates to $2.65/share on a tax-adjusted basis (assuming 35%).

“As such, we believe Halliburton shares would initially trade down if the deal were to break, but not to the magnitude of the termination fee (i.e., down less than 5%),” West said. “The timing of the deal was not ideal and many shareholders have questioned the richness of the $19/share share cash component, as well as owning a company during an integration process that could very well last several years.

“Additionally, we believe improvements in Halliburton’s margins could outweigh the $3.5 billion fee,” West and his colleagues said. Through the downturn, Halliburton has continued to maintain its North American (NAM) service delivery platform and infrastructure “in excess of market needs,’ incurring costs which it would have otherwise eliminated without the merger.

“Additionally, we believe Halliburton’s international infrastructure also remains stretched relative to market needs, though the company has not quantified the margin effect, and that the disarray within Baker Hughes would allow Halliburton further market share opportunities, particularly in North America.” Evercore analysts said.

The merger partners can make a strong case to fight the lawsuit, but the odds that it will be completed now are a “coin flip at best,” Deutsche Bank analyst Mike Urban wrote. He also thinks Baker now is in a weaker position, with its stock price likely to remain “relatively range bound” as the litigation progresses. Because of the challenges the smaller operator may face if it proceeds as a standalone company, Urban lowered Baker’s 2016 earnings/loss estimate to a loss of 42 cents/share from a loss of 37 cents and reduced the 2017 earnings estimate to $1.20 from $1.60.

Deutsche is maintaining a “buy” rating on Halliburton while lowering its price target to $40 from $53, as the company likely would be on “extremely strong footing” even if the merger falls through,

“If anything,” said Urban, “the lack of distractions after well over a year of merger related activities as well as investors currently on the sidelines coming in could actually benefit Halliburton in the short-term.”