The $34.6 billion offer that Halliburton Co. (HAL) put on the table for Baker Hughes Inc. on Monday is one of the biggest energy tie-ups ever in North America, but the No. 2 and No. 3 oilfield service (OFS) giants face anti-trust concerns and approval by their shareholders and their customers before any deal is done. 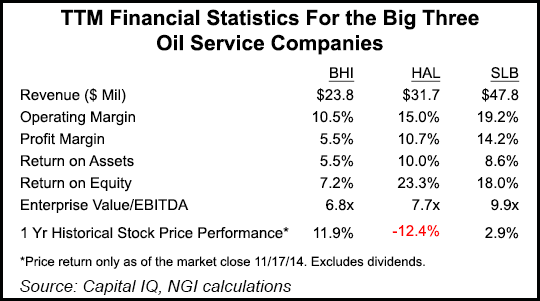 On paper, the proposal is huge, considered one of the biggest deals ever in the OFS sector. On a pro-forma basis, the combined company had 2013 revenues of $51.8 billion, 136,000-plus employees and operations in more than 80 countries. Close to 15,000 of the companies’ combined employees are in Houston alone.

HAL is offering a rich deal, exchanging each Baker share for 1.12 shares, plus $19.00 in cash, representing a premium of 40.8% to Baker for its stock price on Oct. 10, the day prior to the initial offer. HAL also promised a $3.5 billion fee to Baker if the transaction fails to pass anti-trust muster.

HAL investors were unimpressed, sending the stock price down more than 10% Monday to end the day at $49.21 in heavy trading. Baker’s share price rose almost 9%, closing the day above $65.00.

During a conference call to discuss the mega transaction, HAL CEO Dave Lesar highlighted some of the synergies that the combination would bring, particularly in North America where crews often work side by side in some of the onshore basins.

“The integration teams are moving rapidly,” he said. “In particular in hydraulic fracturing, where we can combine our logistics networks.” HAL stockholders “know our management team and know we live up to our commitments. We know how to create value, how to execute and how to integrate in order to make this combination successful.”

Baker CEO Martin Craighead, who also participated in the conference call, didn’t indicate how his management team might fit into HAL’s scheme, except to note that three Baker board members are to join HAL. However, Craighead said the deal would be good for customers.

“I see the potential to have the best oilfield services company that has ever existed, full stop,” said the Baker chief.

As they are configured today, the two companies would have a market cap of more than $70 billion, still far below that of No. 1 Schlumberger Ltd. (SLB) with an estimated $122 billion market cap. HAL and Baker overlap in at least half a dozen service areas. What HAL particularly likes, said Lesar, are Baker’s artificial lift technology and its drilling chemicals line.

The two companies together also would cast a big shadow on the North American pressure pumping market, and relieve HAL from its biggest competitor in the U.S. onshore.

HAL now has a 28% share of the North American pressure pumping business, while Baker holds 26% and SLB 14%. For hydraulic fracturing techniques, where water, chemicals and proppant are blasted into wells, HAL’s market share is around 26%, with Baker at 13% and SLB at around 20%. In the cementing/pumping business lines, HAL is the leader with 35% of the market, while Baker provides 16%, while SLB has 27%.

The combination would increase HAL’s capabilities in the “unconventional, deepwater and mature asset sectors,” said Lesar, providing “substantial and improved growth opportunities and continued high returns on capital.” The combination is expected to yield annual cost synergies of nearly $2 billion.

It’s all about synergies, said Lesar, which “are expected to come primarily from operational improvements, especially North American margin improvement, personnel reorganization, real estate, corporate costs, research and development optimization, and other administrative and organizational efficiencies.” He identified the cost savings from each area:

HAL CFO Mark McCollum told analysts that up to $7.5 billion in assets now are on the table to be sold to satisfy anti-trust concerns.

“We’ve identified a number of potential buyers we believe will be very interested in the businesses that may need to be divested and expect that those businesses should all take excellent prices in expedited sales,” McCollum said. “We’re confident that a transaction is achievable from a regulatory standpoint.”

To address antitrust concerns, a legal team from Baker Botts LLP is advising management. The regulatory process needs to “play out,” before more specifics on asset sales and efficiencies can be detailed, said Lesar.

However, HAL is ready to fight for regulatory approval. “We have the very best in antitrust counsel” and “are prepared to be cooperative with regulatory authorities.”

U.S. antitrust entities of the Department of Justice (DOJ) and the Federal Trade Commission (FTC) “perform what is called a Hirfendahl Hirshmann Index (HHI) test to determine how competitive markets are,” notedNGI’s Patrick Rau, director of strategy and research.

“If Baker and HAL were to merge as is, they would have a combined market share of 54%. Just those two firms combined would have an HHI of 2,916, which is a highly concentrated industry…The point is, I don’t see how the DOJ/FTC allows this merger without requiring these guys to divest some of their pressure pumping equipment.

“But I’d also have to think one of the reasons they are looking to merge is to give them some more control over what they are able to charge for their pressure pumping services, so they are only going to want to divest so much. What Washington decides on this is going to go a long way in determining how and perhaps even whether this merger goes down.”

Craighead and Leser sidestepped questions about potential job layoffs, but many people in Houston are updating their resumes, NGI’s Shale Daily was told by several sources. Lesar noted HAL had planned to hire 21,000 employees this year to fill necessary positions, but that would not nearly account for Baker’s estimated 60,000-plus of employees.

In additional to regulatory approvals, each company’s stockholders has to approve the transaction. Once completed, the combined board would expand to 15 members, three of whom would be from Baker.

Analysts said during the conference call that the acquisition made sense. Tudor, Pickering, Holt & Co.’s Jeff Tillery and Byron Pope noted that “this dance has been going on for a long time.” In correspondence that Craighead disclosed between the two companies late Friday, there was “an interesting tidbit about the confidentiality agreement signed by the two companies in 2005,” so the deal “is far from being a new courtship. Looking back at our own writings, the rumor mill ramped up the volume enough several times in 2006 and 2007 that we addressed it in morning note comments.”

Lesar also addressed the supposed antagonism between HAL and Baker that escalated ahead of the announcement.

“There is always a bit of theater when these things come together,” he told analysts. The cash portion of the transaction, set to be completed in the second half of 2015, is to be financed through a combination of cash on hand and debt financing.