Following a second quarter of across-the-board sequential improvement for the company’s financial metrics, including a 12% increase in revenue for its North America segment, management for Halliburton Co. sees itself at the start of a “multi-year upcycle.” 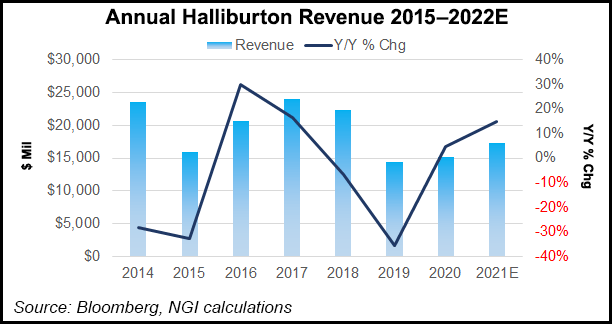 Reported quarterly losses in 2020 were steep, but after getting back into the black financially in the first quarter, the Houston oilfield services (OFS) giant continued to improve on revenue and income during the second quarter.

“Our second quarter performance demonstrates that our strategy is working well, and Halliburton’s strategic priorities are driving value in this transition year,” CEO Jeff Miller said. “Total company revenue increased 7% sequentially, as both North America and international markets continued to improve, and operating income grew by 17% with solid margin performance in both divisions.”

The Completion and Production segment saw revenues increase to $2.048 billion from $1.870 billion in the first quarter, while the Drilling and Evaluation segment posted revenues of $1.659 billion, up sequentially from $1.581 billion in the prior quarter.

The Completion and Production segment’s margin rose to three-year highs during the quarter, Miller said. The margin for Drilling and Evaluation “outperformed expectations,” and both divisions are set up for “robust margin growth this year,” the executive added.

During a conference call with analysts Tuesday, Miller outlined the company’s expectations for “activity momentum to continue” in the second half of this year.

“With commodity prices remaining supportive, we believe activity in North America inches higher, with drilling outpacing completions as operators build up well inventory for 2022,” he said.

Looking longer term, Miller said the company sees itself “in the early innings of a multi-year upcycle. For the first time in seven years, we anticipate simultaneous growth in international and North America markets.

“…We believe commodity prices will remain structurally supportive. With both demand resurgence in many economies and increased vaccine availability, we anticipate the global demand will continue to exceed supply, particularly to the extent” the Organization of the Petroleum Exporting Countries and its allies, aka OPEC-plus, “manages supply additions over the near-term.”

Amid a return to “normalized levels” of spare capacity for OPEC-plus over the next year, there should be “sufficient pent-up global oil demand” to “support a call on both international and U.S. production,” according to Miller.

“We expect drilling and completion spending in North America will…grow double digits annually over the next two years, although activity will not return to pre-pandemic levels,” Miller said. “We expect private operators to opportunistically lead the activity comeback,” while public exploration and production companies will look to “balance growth and returns.”

Revenue for Halliburton’s international business climbed to $2.1 billion during the quarter, a sequential increase of 4%.

Management attributed the improvement to higher well construction activity, completion tools sales and well intervention services across all of the company’s operating regions. Partially offsetting these improvements, software sales were lower across all regions, and Halliburton also saw a decrease in stimulation activity in Latin America.

Operating income totaled $434 million for the quarter, up sequentially from $370 million in the first quarter. In the year-ago period the company reported an operating loss of just over $1.9 billion.