Halcon Resources Corp. said late Tuesday it would revive its drilling program in its El Halcon area of the Upper Eagle Ford Shale in East Texas early next year, citing firming oil prices and encouraging results from offset wells in the region as part of its decision. 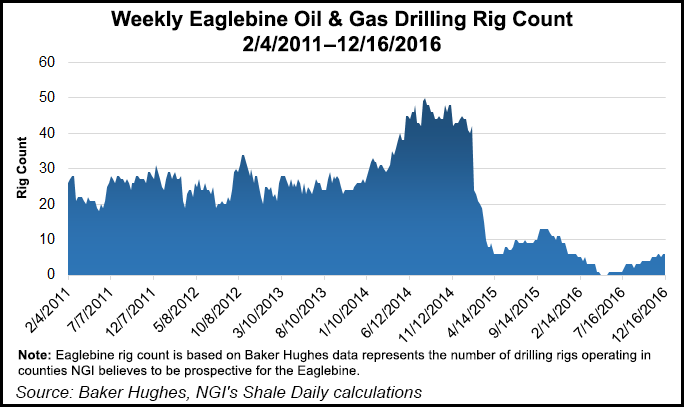 The company hasn’t operated a rig on its El Halcon properties in nearly a year because of low commodity prices. It said in March that it would drop its sole rig there and reduce its activity to only one rig in the Williston Basin. But improving oil prices and a review of 18 offset operator wells in East Texas have led management to believe the company can “significantly” improve estimated ultimate recoveries (EUR) and well economics in the El Halcon.

Halcon plans to employ an enhanced completion technique using slickwater fractures and heavy proppant loading to improve results in the play. The company said 7,500 foot laterals with 50 fracture stages and 3,000-3,500 pounds of proppant/foot should yield an average EUR of 706,000 boe. Those wells each would cost $8 million to drill and complete. The company plans to drill and complete five wells in the Eagle Ford in the first half of 2017.

Halcon has 80,000 net acres in the Eagle Ford, and it said the enhanced completions could reduce well spacing by half from 1,000 to 500 feet, and increase the number of drilling locations to more than 1,000.

The company expects fourth quarter production to average 38,000-39,000 boe/d, slightly below Wall Street expectations on inclement winter weather in the Williston Basin. Halcon completed a restructuring and exited a prepackaged bankruptcy in September, eliminating $1.8 billion in debt. It has set a preliminary budget of $200 million for drilling and completion in 2017 — roughly in line with the $180-210 million it budgeted at this time last year.