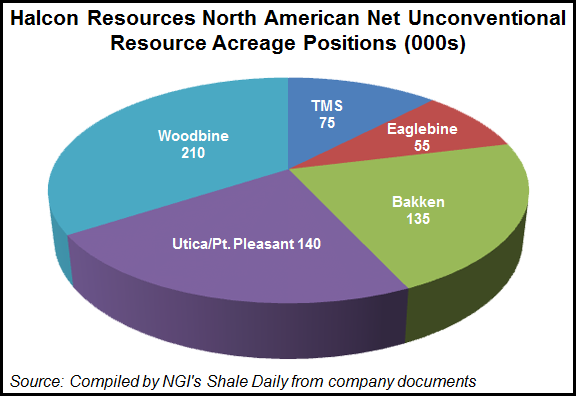 The Houston-based company said it will reallocate capital from its Woodbine play for the remainder of the year in support of the El Halcon delineation effort. Halcon continues to focus on defining the footprint of El Halcon and has 55,000 net acres leased or under contract with a target of 100,000 to 150,000 net acres (see Shale Daily, April 16).

“Halcon is operating five rigs at El Halcon,” the company said. “The average effective lateral length for the two most recently drilled and completed wells in the play is 8,349 feet. The average initial production rate from these two wells is 1,116 boe/d (94% oil) on a 16/64 choke, or 18% higher than the average initial rate for all previously drilled and completed company-owned wells in this area.”

Recently, the Bison 1H, located in Brazos County, was drilled from spud to target depth in 10.75 days, including a 9,157-foot lateral. “The curve for this well was drilled in 19 hours, which represents a significant improvement,” the company said. “In addition, Halcon batch set surface casing in nine days on all three wells on its first three-well pad utilizing a walking rig.”

In the Woodbine Halcon said it is running two rigs on its 210,000 net acre position prospective for the Woodbine and other formations in East Texas. The focus continues to be on drilling wells in the Halliday Field in Leon County. Halcon said it expects to have data from a 330 square mile 3-D seismic survey spanning portions of Leon, Madison and Grimes counties by the end of 2013 to aid in the further development of the play.

Woodbine wells do not achieve maximum production until artificial lift equipment is installed. The initial method of artificial lift is jet lift with the long-term solution being rod pump, Halcon said.

In the Bakken/Three Forks, Halcon is operating eight rigs on its 135,000 net acre position in the Williston Basin. Drilling and completion modifications are continuing “to yield impressive results,” the company said.

“Specifically in the Fort Berthold area, Halcon has transitioned to batch pad drilling and made several modifications to its completion design. The company is utilizing plug and perf on completions. In addition, Halcon has changed to ceramic proppant, increased the proppant volume per lateral foot, increased stage density and is employing simultaneous fracks or zipper fracks.”

Halcon said it expects well costs in the Fort Berthold area to decrease by approximately 10% to $9 million by the end of 2013 through efficiencies related to pad drilling, implementation of centralized production facilities and continued optimization of completion techniques.

In the Marmon area, the average initial production rate for the two most recently drilled and completed Bakken wells was 91% higher than the average initial production rate for all company-operated Bakken wells previously completed in the area. Halcon believes the improvement is attributable to a modified completion design. Well costs in the Marmon area are averaging $9.5 million, and Halcon expects these to decrease by 5% to $9 million by the end of the year. Further well cost reduction is expected next year once pad drilling is fully implemented.

In the Utica Shale/Point Pleasant play, Halcon is drilling its ninth well on its 140,000 net acre position in northeast Ohio and northwest Pennsylvania. The nine wells were drilled across 70 miles and five counties.

Pilot holes were drilled on five of the wells with complete log suites. In addition, a total of 1,844 feet of conventional core has been acquired across the Utica/Point Pleasant formations on four wells and completion operations on three of the wells were monitored with microseismic surface arrays to determine the efficiency of each frack job. Halcon is acquiring 285 square miles of 3-D seismic data across its leasehold, and the first phase of this survey encompasses 125 square miles and is expected to be completed by the end of the year.

Additionally, Halcon Field Services is identifying midstream opportunities in the play and is evaluating the potential for a joint venture, the company said.