Halcon Resources Corp. is still figuring out the Utica/Point Pleasant play while it is making progress on well completions in the Bakken/Three Forks and adding acreage to its recently announced East Texas Eagle Ford play, CEO Floyd Wilson said Thursday. 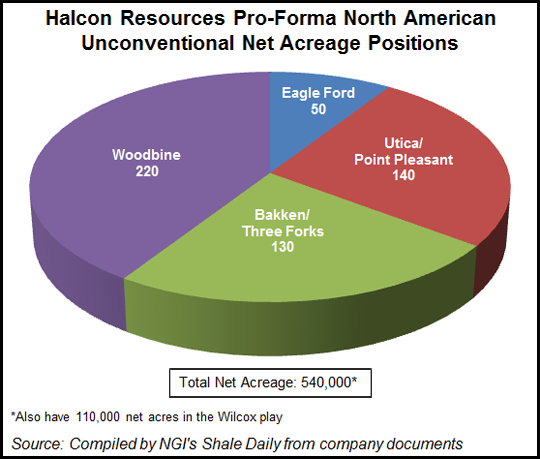 “We are making progress on all fronts: significant operational improvements in the Williston Basin, dramatic improvements in lease operating expense, the recent unveiling of a new core Eagle Ford play in East Texas and encouraging flowback data from our first well in the Utica/Point Pleasant play,” Wilson said.

Despite the progress, the first quarter was an earnings disappointment. Halcon shares tumbled more than 9% to close at $5.67 in heavy trading Thursday.

Net production during the first quarter increased to an average of 26,022 boe/d, compared to 4,055 boe/d for the year-ago quarter. First quarter production was composed of 82% oil, 5% natural gas liquids (NGL) and 13% natural gas.

Wells Fargo Securities was expecting adjusted earnings per share of 9 cents, while the Street was looking for 7 cents/share, Wells Fargo’s Gordon Douthat said in a note Wednesday. The earnings miss was due to lower production and realizations, as well as higher general and administrative, and depreciation, depletion and amortization expense than expected, Douthat said.

Revenues for the first quarter increased to $190.7 million compared to $26.9 million in the year-ago quarter, mainly due to increased production related to the acquisitions of GeoResources Inc., producing assets in East Texas and two entities owning producing assets in the Williston Basin in 2012, Halcon said.

The company provided second quarter production guidance reflecting divestiture of 500 boe/d of production from South Louisiana properties that were sold during the fourth quarter, which combined with other impacts to production (divestitures and gas flaring due to infrastructure constraints) add up to about 3,333 boe/d, Halcon said.

The high case for second quarter production is 29,000 boe/d, while the low case is 27,000 boe/d, the company said. Eighty-three percent of production is expected to be oil, with 5% NGLs and 12% natural gas.

The second quarter production forecast is lower than what Wells Fargo was looking for and implies a “significant ramp to hit full-year targets,” the firm said. Wilson told analysts during a conference call Thursday that management is “very confident” Halcon will meet its full-year goals.

Halcon said it believes that modified completion techniques are the primary factor contributing to improved initial rates from the recently drilled and completed wells in the Fort Berthold and Marmon areas. Specifically, the last four Three Forks wells drilled in the Fort Berthold area have an average initial production rate of 2,094 boe/d (86% oil), a 77% improvement to all other Three Forks wells completed by Halcon in the Fort Berthold area during the first quarter using the previous completion method. In the Marmon area, the average initial production rate for the two most recently drilled Bakken wells is 91% higher than the average initial production rate for all company-operated Bakken wells previously completed in the area.

As previously disclosed, production from the Williston Basin was cut by about 1,500 boe/d in the first quarter due to continued flaring of about 6 MMcf/d of gas, inclement winter weather and the implementation of batch drilling. The company is working to reduce flaring, but a more permanent solution is not expected to be in place until the fourth quarter.

The company’s recently unveiled 50,000 net acre position in East Texas targeting the Eagle Ford Shale, called El Halcon will be further defined throughout the remainder of the year, the company said (see Shale Daily, April 16). Halcon said it expects to build an aggregate position of up to 150,000 net acres “over time.”

Halcon averaged one operated rig, spud two wells and completed two wells in El Halcon during the first quarter. Average initial and 30-day production rates for the applicable wells completed in the quarter were 1,028 boe/d (94% oil) and 831 boe/d (94%) oil, respectively. These wells have an average effective lateral length of 6,379 feet and were completed with an average of 33 frack stages. Halcon recently drilled the Bumble Bee 1H well in Brazos County in 25 days (spud to rig release) with a pilot hole. This well has an effective lateral length of 8,870 feet, which is 39% longer than the average for the two wells completed in the first quarter. The curve was drilled in 24 hours and the lateral was drilled in 5.75 days.

There are currently seven Eagle Ford wells producing, one well being completed and three wells being drilled.

In the Utica/Point Pleasant, Halcon averaged two operated rigs, spud four wells and completed four wells in Ohio and Pennsylvania during the quarter. The company is delineating its acreage and expects to be finished by the fourth quarter. Production testing has begun on the Phillips 1H well in Mercer County, PA, and Halcon anticipates that four wells will have been tested or will be in the testing phase by the end of May.

The Phillips 1H commenced flowback on April 8 and measured first hydrocarbons on April 14. Halcon has maintained a continuous flowback on the well and rates continue to increase, the company said. “While still recovering frack load, early stage flow rate data is encouraging.

The early Utica wells have been costly (about $10 million a copy), but later on, pad drilling is expected to lower costs dramatically, Wilson said.

In his research note, Douthat mentioned that the company’s earnings release didn’t provide much data on Utica well performance. During the conference call, Wilson said, “it just takes a while for these wells to clean up after frack jobs. We’ll release those results as soon as we have them.” He did say that the company has seen “some of the best log and core results that we’ve experienced in that entire play on a couple of wells that we’re getting ready to frack.”

Halcon “is focused on building an inventory of approved/permitted multi-well pads in preparation for a full-scale development program to optimize drilling and completion costs,” the company said. “There is currently one Utica/Point Pleasant well producing, four wells resting, one well being completed and two wells being drilled.”

During the quarter, Halcon averaged five operated rigs and spud 11 wells on its Woodbine acreage. “Woodbine wells are low-energy wells that do not achieve maximum production until artificial lift equipment is installed,” the company said. “Initial rates will not be reported until a well has been online for 45 days, at which time the initial rate is calculated based on the highest seven-day average.”

As previously disclosed, a combination of gas flaring, the implementation of full scale pad drilling and underperforming wells drilled to define the edge of the Halliday Field in Leon County cut production by 1,333 boe/d in the first quarter. “Based on extensive technical work and recent well data, Halcon expects Woodbine results to improve and plans to focus on drilling in the core of the Halliday Field,” the company said.

Halcon announced Thursday that it has struck a deal to sell its Eagle Ford assets in Fayette and Gonzales counties, TX. Closing is expected during the third quarter. Subject to market conditions, Halcon said it intends to divest about 4,500 boe/d of production from conventional assets this year.