Halcon Resources Corp. said it has acquired more than 50,000 net acres of leasehold in an Eagle Ford Shale play in East Texas, and plans to eventually triple its presence and invest $100 million there this year. 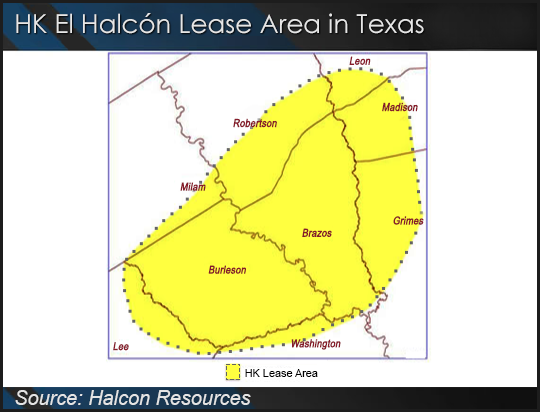 Speaking at the Independent Petroleum Association of America’s (IPAA) OGIS New York conference on Monday, CEO Floyd Wilson said the Houston-based company has dubbed the new shale play the El Halcon, and would be the company’s fourth core area of operations.

In a slide presentation that accompanied Wilson’s remarks, the company revealed that the leasing area for the new El Halcon play includes substantially all of Brazos and Burleson counties, plus portions of Grimes, Lee, Leon, Madison, Milam, Robertson and Washington counties.

Halcon said it has seven producing wells in the new play, with an average initial production (IP) rate of 859 boe/d, and a 30-day IP rate of 694 boe/d. Both IP rates were 94% weighted toward oil. One additional well was in the process of being completed and three more were being drilled.

“Our salesmen, and a few others, are drilling wells in there fast and furiously,” Wilson said. “This has all happened within the last few months, actually. We’re making quite good wells. We’ve had a few wells with nearly 800 b/d 30-day IP rates. Some were not quite that good, but those are the kind of stats that tell you that the play is only going to get better.”

“There’s room for improvement here,” Wilson said. “The improvement will come, in the first instance, probably in the cost side of this. We expect to get the wells down under $7 million. The second set of improvements will come with experience on the completion side of things.

“We expect to beat this tight curve [with] the seven wells here. Everything is going the way we expected. We’re looking for wells in the 350,000 to 400,000 bbl range for under $7 million. Those economics are very good. That’s an expensive area to work in, and again it’s one in which we’ve had a lot of experience.”

In the Wilcox Formation in Louisiana — where Halcon holds about 110,000 next acres and has two wells in production — Wilson said the company plans to drill four wells by mid-2013 with one operated rig. The CEO said Halcon was trying to determine which of its identified locations in the formation would be best for future development, and was evaluating the potential for multi-well pad and horizontal drilling.

“We’ll drill quite a few operated wells there this year, bringing six or seven rigs today,” Wilson said. “The story up here is we acquired all of this stuff within the last six months or so, so it’s time to put our thinking caps on to see what we could do to make some modifications, which we’ve been doing.

“It’s pretty well known where to drill these wells. As you get into pad drilling and batch drilling you have massive opportunities to change your cost structure. If you move in and drill fix or six wells at a time…you have a chance to save more than $1 million per well, without doing anything but logistically altering your program.”

In the Utica Shale, Halcon holds a position of about 140,000 net acres. Wilson said the company would drill 10 wells by mid-2013 to delineate its acreage, and would test six wells by the end of 2Q2013. He added that Halcon would run two to three operated rigs in the play in 2013, which are expected to spud between 20 and 25 gross wells.