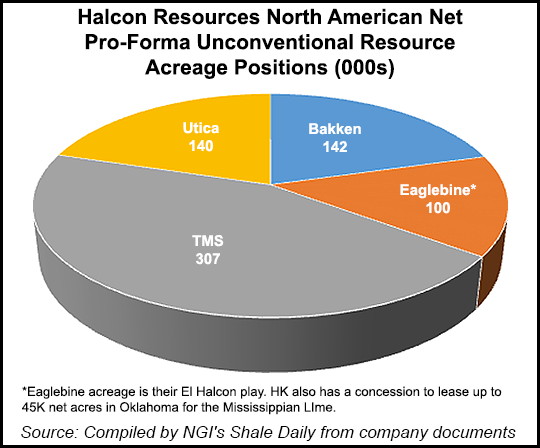 Along with fourth quarter results (see related story), Halcon announced that it has acquired about 307,000 net acres prospective for the TMS. About 77% of the acreage is in southwest Mississippi and the Louisiana Florida Parishes, also known as the Eastern TMS. CEO Floyd Wilson demurred during Thursday conference call when an analyst asked how much was paid, but he said that when the last of the leasing is wrapped up, the package will work out to less than $1,000/acre.

Using “simple math,” BMO Capital Markets analyst Dan McSpirit came up with an implied value of “something a little less than $2,000/acre,” prior to the company’s earnings conference call Thursday. He wrote that uncertainty over the TMS buy could overshadow Halcon’s positive news in the Williston and in East Texas, where drilling and completion efficiency improvements, particularly slickwater fracks, are lifting EURs and lowering costs.

McSpirit was right; on Thursday investors dinged Halcon shares, sending them down nearly 5% to close at $3.67 in heavier trading than usual.

“We have been working the Tuscaloosa Marine Shale from a geologic standpoint and monitoring industry activity in the play for quite some time,” said COO Charles E Cusack. “Our strategy is to identify scalable and repeatable resources plays where we feel we can meaningfully improve the economics by applying our extensive technical experience. We believe the TMS fits that strategy, and we are excited about our position in the play.”

Taking a “longer term view,” McSpirit wrote that “…the TMS could be the asset that finally gives HK [Halcon] the identity we believe it needs…We’ll go further and state that what’s good for HK is potentially good for GDP and SN, once the market filters implied values and the like.”

Halcon has been working the TMS for more than a year with access to “hundreds of well logs and core data from a number of wells,” the company said. “As a result, geologic mapping from these efforts have allowed for the acquisition of land within a well-defined area believed to be the geologic core.”

The company plans to operate an average of two rigs for the remainder of 2014 and spud 10 to 12 gross operated wells in the TMS. It also expects to participate in several nonoperated wells in 2014. Expectations are to spud the next operated well in March near producing TMS wells in Wilkinson County, MS. No changes to guidance are being made because TMS drilling activity was incorporated into this year’s business plan and budget. Halcon plans to spend about 10% of its drilling and completions budget in the play this year, subject to reduction dependent upon negotiations with potential joint venture (JV) partners.

A JV is not necessary for Halcon to run its TMS program, Wilson said, but it might be nice, he allowed.

Funding for the TMS program will come from proceeds from the sale of East Texas assets, also announced this week. Halcon has agreed to sell noncore assets in East Texas for $450 million with the deal expected to close in the second quarter with an effective date of April 1. The assets include 83,000 net acres primarily in Leon, Madison and Grimes counties, TX. These properties produced an average of 3,800 boe/d during January. Estimated proved reserves associated with the assets at year-end were 16.3 million boe, 39% of which was proved developed. Closing of the sale will “essentially” conclude the company’s 2014 divestiture program, Halcon said.

On Thursday, analysts queried Wilson and Cusack about what’s been going on of late in the TMS, where some wells have encountered mechanical difficulties (see Shale Daily, Dec. 27, 2013).

“This play has not had the benefit of having 10 or 15 rigs, industry-wide, drilling in it yet,” Wilson said. “It will…And that’s when the avalanche of new data comes to everybody. You’ve had a couple pioneers out there drilling wells with some tremendous success and with some mechanical issues. We’re very familiar with the issues. We’re very familiar with our thoughts on how to work around those. We’re sharing data with the other significant operators in the area, and we would expect that one’s ability to get these wells drilled will improve with experience.”

Wilson said that TMS wells where a portion of the lateral has been lost due to mechanical problems have still shown encouraging results. “With what those wells are putting out…if you normalize that into a normal length of lateral — in our case, we hope to be about 7,500 feet — you come to the right answer.”

Earlier this year at a Houston energy conference, Goodrich COO Robert Turnham talked about his company’s views of the TMS and how it has been evolving. Goodrich, he said, has put together more than 300,000 net acres in the play “at a very cheap price” of $185/acre. Plenty of wells have penetrated the TMS going back to the 1970s, he said.

“In the old days, call it the late 1990s for us, you’d bypass this on the way down to test the conventional sands,” Turnham said of the TMS. “You knew you had gas shows. You knew you saw oil in the pits, but you basically ignored it because you didn’t have the frack technology to get it to produce in commercial quantities.”

On Thursday Cusack said of the TMS, “This is the Eagle Ford Shale,” a play about which much is known, of course. TMS laterals of 7,500 feet won’t be a problem for Halcon, Cusack said, given the company’s experience drilling 10,000-footers “every day in the Bakken.”