Houston-based H2O Midstream LLC has joined a growing list of operators building out produced water infrastructure in the Permian Basin with a deal to acquire assets from Sabalo Energy LLC, concurrent with a 15-year acreage dedication to provide produced water gathering, disposal and recycling services. 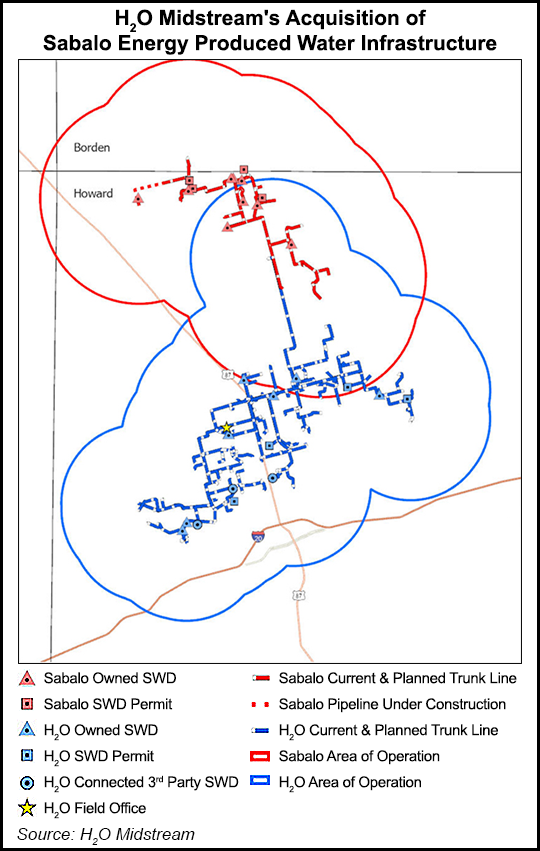 The acquisition of Sabalo’s water infrastructure is an important step toward H2O’s goal of being the top integrated water midstream provider in the Permian Basin, said CEO Jim Summers.

Sabalo, a private independent sponsored by EnCap Investments LP is headquartered in Corpus Christi, TX. Its oil and gas assets are concentrated in Howard County.

“As a result of this transaction, Sabalo has secured a long-term partnership to gather all of its produced water via pipe and the optionality to scale up produced water recycling operations to meet the needs of an aggressive completion schedule in the future,” Sabalo CEO Barry Clark said.

In addition to the ongoing buildout to accommodate Sabalo, H2O is adding daily recycling capacity of 40,000 barrels, with the option to expand to 80,000 over time.

As U.S. oil production continues to grow, so will produced water, offering substantial market opportunities as operators look for ways to reuse or dispose of the dirty water, according to Raymond James & Associates Inc.

The produced water market in the United States may reach 4 million barrels/day by 2025, analysts said. Disposal and treatment costs for water typically run around $1.00/barrel, which means there is a $12 billion market in the Permian alone, which has more than 60% of the country’s produced water.

Raymond James analysts estimated in July that the U.S. produced water market today is estimated at 50 million barrels a day. “Given that the U.S. only produces about 15 million bbl of petroleum liquids each day, you can see that oilfield water production outpaces oil production by more than 4-to-1 on a national basis. For scale, this amount of water could cover over 8,000 football fields with a foot of water, each and every day.”

Finding outlets for produced water is important as growing volumes and expanding costs pose risks to production growth in the Permian, according to Wood Mackenzie’s Ryan Duman, a senior analyst who covers the Lower 48. He spoke recently at the Unconventional Resources Technology Conference in Denver.

With low breakevens and favorable margins, exploration and production (E&P) operators have rapidly increased oil production, leading to a growing strain on Permian infrastructure, which has resulted in the growing challenge of how to source water and what to do with the produced water.

“Without adequate investment and planning, produced water threatens to lower Permian production potential, as it can shift the entire Permian cost curve,” Duman said. “Water management in the Permian is becoming more expensive, in addition to slower permit approvals and the prospect of additional regulations.”

Produced water is injected into saltwater disposal wells or treated. However, growing volumes are flowing back to the surface as demand increases for enhanced completions. Multi-well pad developments also may result in a higher concentration of produced water in a single geography.

Water midstream companies may be better able to tackle complex and growing water-related challenges by linking operator positions and offering economies of scale, according to Wood Mackenzie. This may help limit operational risk at a reasonable cost.

“There is no one-size-fits-all solution,” Duman said. “effective water management is unique to each exploration and production company. Self-build, third-party solutions or a combination may all be ideal, depending on a wide variety of factors.”
He noted that the water management industry is fragmented and evolving alongside regulations and technology.

Texas and New Mexico, which share the Permian, have growing produced water issues. Earlier this year each state produced legislation to help clarify water rights issues and encourage reuse. Texas House Bill (HB) 3246 is set to take effect Labor Day (Sept. 1), while New Mexico’s HB 546 took effect July 1. The bills basically allow E&Ps to own their produced water, which they may sell to recyclers. The recyclers then assume legal responsibility.