Not only is Guyana set to become one of Latin America’s shining economic stars, but the once poor backwater could soon be a key player in the new global energy map. 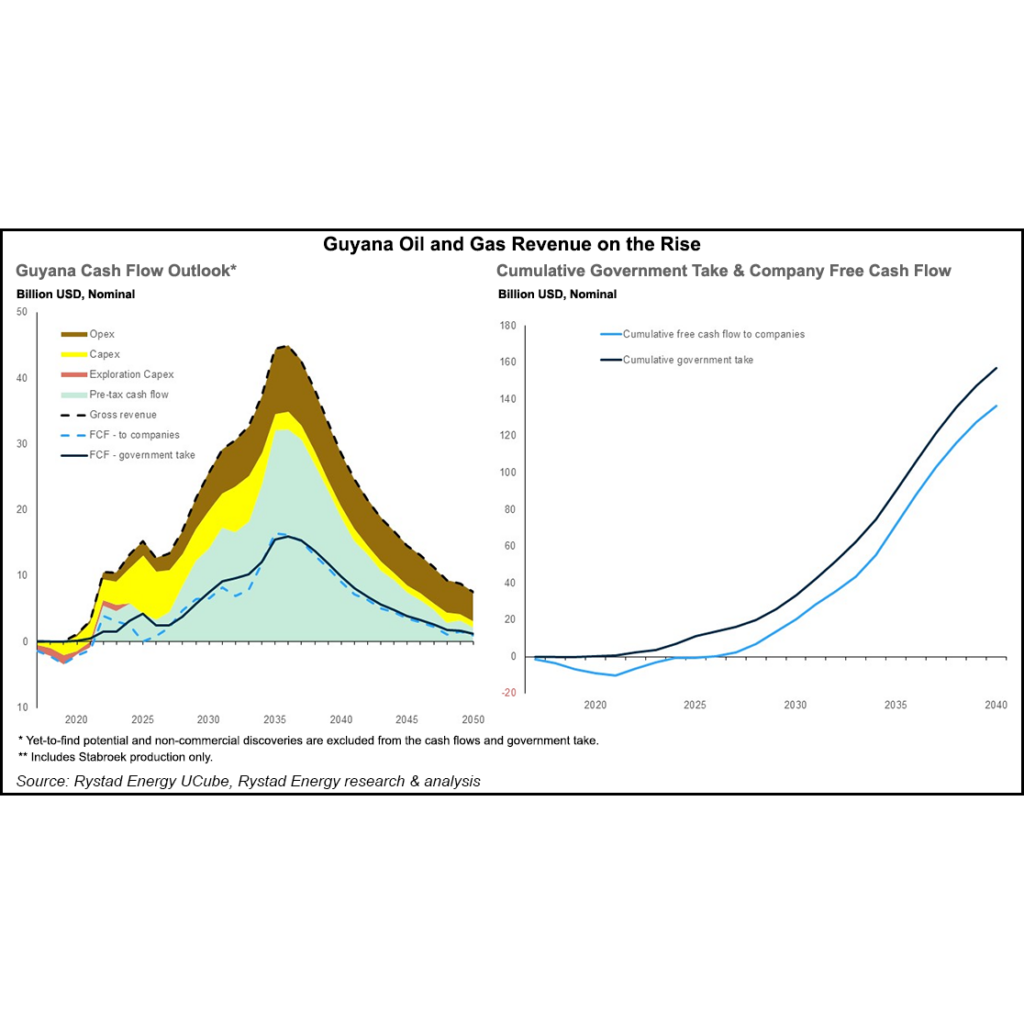 The International Monetary Fund (IMF) sees the Guyanese economy growing by a staggering 47% this year, even as the rest of the world could be heading toward a recession.

Driven by the offshore Stabroek block, government revenue from oil production is on track to surpass $1 billion this year, according to Rystad Energy. This figure could hit $7.5 billion in 2030 and $16 billion in 2036.

“This year is set to be a turning point for the Georgetown government to start capitalizing on the vast reserves in the offshore field, with revenues more than doubling over 2021 levels,” according to Rystad analysts. Georgetown is the capital city in the nation of 785,000 citizens.

Ali said the government was working to implement a “multifaceted” policy focused on providing the public information on the oil and gas boom; transparency around revenues; and “a clear approach” to utilization of the funds to transform the nation. A sovereign wealth fund has also been established.

Ali added that the oil and gas development needed to be “expeditious” but “in a responsible way.”

According to Rystad, Guyana has been the global leader in total offshore discoveries since 2015. Discoveries add up to 11.2 billion barrels of oil equivalent, amounting to 18% of discovered resources and 32% of discovered oil.

The development is being unearthed by a consortium led by ExxonMobil. Exxon affiliate Esso Exploration and Production Guyana Limited is the operator and holds 45% interest in the Stabroek block. Hess Guyana Exploration Ltd. holds 30% interest and CNOOC Petroleum Guyana Limited holds the remaining 25%.

The Stabroek block accounts for all of the nation’s oil and gas finds, “but recent discoveries in other areas show the potential for growth elsewhere,” according to Rystad.

Exxon sees production hitting 1.7 million b/d by 2035. This would put the country in fourth position on the list of the largest global offshore oil producers, ahead of regional peers like Mexico and the United States, according to Rystad.

Just this past April, the consortium received approval from the government of Guyana for the Yellowtail project, which would be the largest to-date asset in the country. Production is slated for 2025 and is expected to hit 250,000 b/d.

President Ali said that the world had changed since Russia’s invasion of Ukraine. “I think we are graduating to a position now where fossil fuels are seen as critically important for a long period into the future,” he said.

He said that the current geopolitical situation was underlining that “sometimes you can have all the money, but you don’t have the product.”

He added, “Guyana should be strategically looked at as an important player for the U.S. in energy security.”

If Guyana’s emissions targets are achieved, “it would see the country meet a tenfold increase in demand for electricity supply by 2040 whilst retaining greenhouse gas emissions at 2018 levels. This would be an extraordinary example of how economic growth can be decoupled from carbon emissions,” said the United Nations Resident Coordinator in Guyana, Yeşim Oruç.

President Ali said the country’s energy policy is “not wedded completely to oil and gas.” Guyana is developing wind, hydro and solar resources, as well as a natural gas plant to ensure reliable and affordable energy supply in the country.

Natural gas is an important part of this, Ali said. Exxon is building a 141-mile offshore natural gas pipeline for a new power plant in the capital city of Georgetown.

“Energy is a social good, like water and housing,” Ali said. “The world today requires energy. Covid taught us this. Education requires electricity.” To underline how far the country has come, he said that as a child in his village “we had so many power outages, that when you had electricity, we used to jump up and sing and dance.”

According to Rystad, comparing the fiscal regimes of other offshore leaders, Guyana’s is on the higher end, with the government take at around 59% of total value. But breakeven costs are also globe-beating, averaging $28/bbl across all projects and less than $20 for producing projects, according to Rystad.

The Rystad analysts cautioned however that “there are still improvements to be made. For instance, the Extractives Industries Transparency Initiative (EITI), which champions strong resource management and governance practices, recently found several weaknesses in Guyana’s company reporting and tax processes. However, their EITI score will likely grow in the coming years as recent improvements take effect.”