Gulfport Energy Corp. smashed its natural gas, oil and liquids production records in 2Q2013 with total output at 815,300 boe, with the Utica Shale the outstanding contributor. A year earlier the operator produced a total of 663,300 boe. 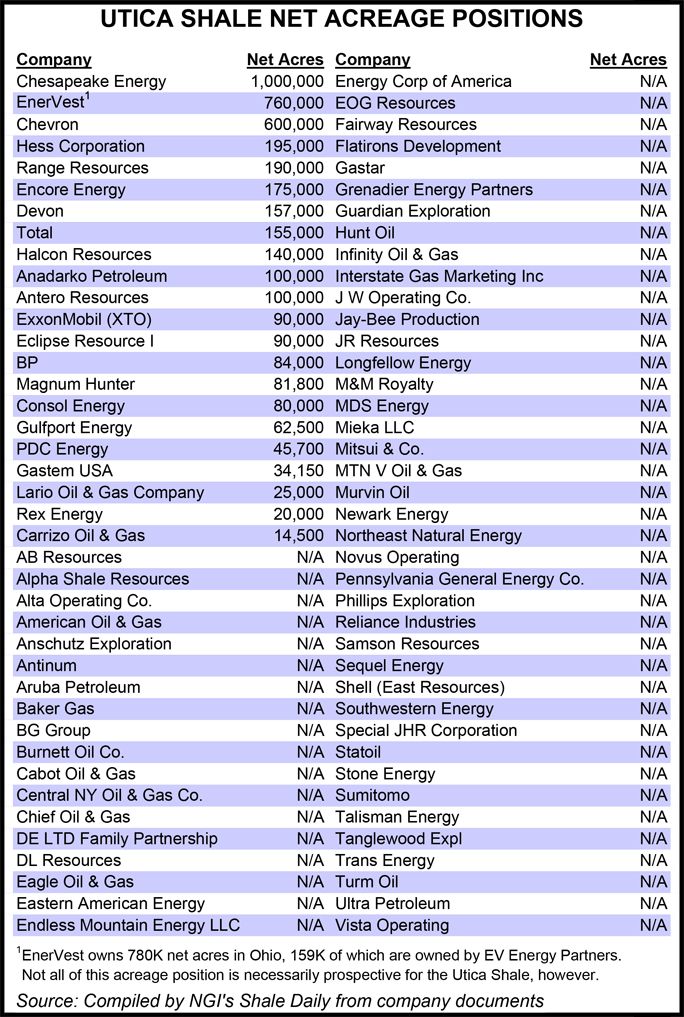 In its operations update Tuesday, the Oklahoma City-based driller said it produced 8,959 boe/d between April and June, at the high end its original guidance of 8,500-9,000 boe/d. The full quarterly report is scheduled to be issued on Aug. 7.

By region, Utica output was 320,718 boe with aggregate production of 13,458 boe in the Bakken Shale and Niobrara formation. Another 297,421 boe was produced at West Cote Blanche Bay, with 183,703 boe at Hackberry. Not included in the latest quarterly results are more than 102,600 boe, all in the Permian Basin, after those assets were contributed last October to an initial public offering of Diamondback Energy (see Shale Daily, Nov. 11, 2012).

In the Utica, where Gulfport has about 145,000 gross acres, two wells ramped up in 2Q2013 that were significant, said Gulfport.

The McCort 1-28H well, recently tied in to sales, had an average seven-day sales rate of 9.6 MMcf/d and 835 b/d of NGLs, assuming full ethane recovery and a gas shrink of 14%, or 2,218 boe/d. The well was drilled to a true vertical depth of 8,475 feet with a 7,501-foot horizontal lateral. The gas being produced at 1-28H is 1,167 Btu, and assuming full ethane recovery, the output should be another 87 bbl of NGL/MMcf of gas and result in a gas shrink of 14%, Gulfport said. If ethane is rejected, “the composition is expected to yield 31 bbl of NGLs per MMcf of natural gas and result in a natural gas shrink of 7%.”

“Realized price for oil in the second quarter of 2013 reflects the impact of fixed-price contracts for approximately 5,000 bbl of oil a day at a weighted average price of $101.96 before transportation costs and differentials,” the producer said.