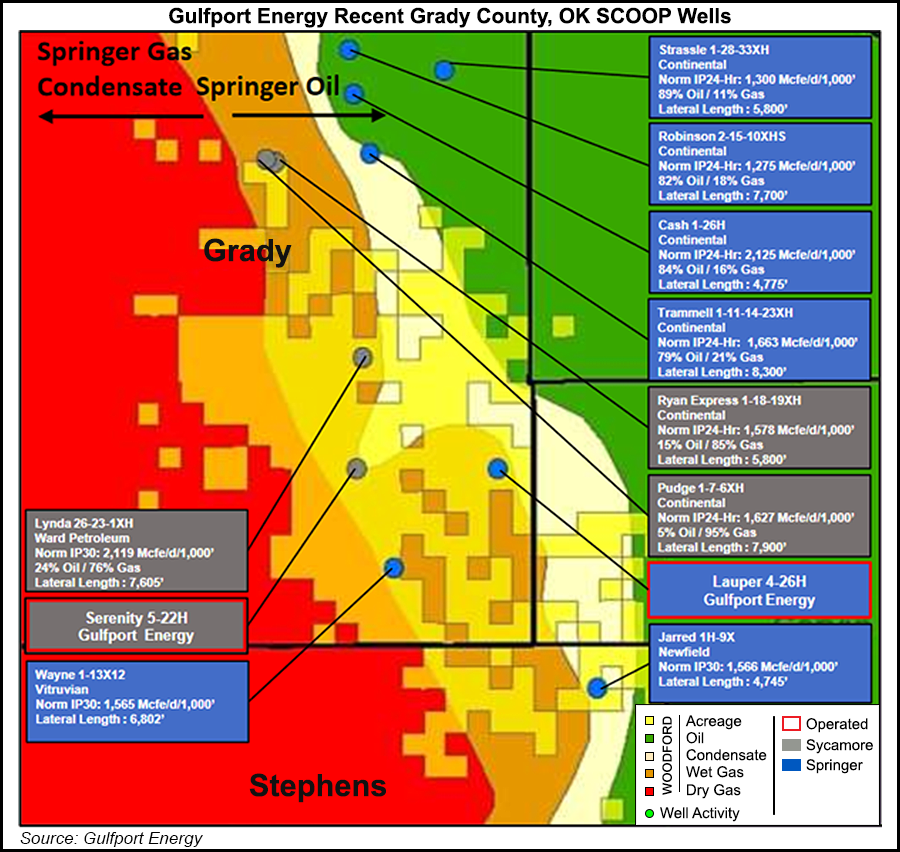 The Lauper 4-26H produced at a 24-hour initial peak production rate of 780.2 boe/d, consisting of 79% oil, 11% natural gas liquids and 10% natural gas. The well was completed with a 4,527-foot lateral on the eastern side of the company’s acreage in an oily window of southeastern Grady County.

The primary target is the Woodford Shale, but Gulfport spud the Springer Shale well and a Sycamore well in 2Q2017 to get a better idea of its SCOOP prospects to dictate the pace of delineation in 2018. The Sycamore is similar in age to the Meramec and Osage formations that are being developed to the north of Gulfport’s position, sandwiched between the Woodford and Springer. Results are expected from the Serenity 5-22H, the first Sycamore well, by the end of the year.

Gulfport entered the SCOOP earlier this year in a $1.85 billion deal with Vitruvian II Woodford LLC and brought on its first operated wells shortly after. Gulfport’s SCOOP position now stands at 92,900 net acres, with 50,400 net acres prospective for the Woodford and 42,500 for the Springer.

Gulfport also released 60-day production data from six of its Woodford wet gas wells in central Grady County after market close on Monday. Five of the wells are averaging at or above 15 MMcfe/d, while another averaged 7.4 MMcfe/d.

Regarding the Springer well, Williams Capital Group LP analyst Gabriele Sorbara said in a note to clients that “we believe this initial success in the Springer validates the company’s potential inventory identified at 354 gross/70 net locations.” The wells have demonstrated minimal declines from 30-day rates, according to Mizuho Energy analyst Tim Rezvan. The oil cuts for the wells, have averaged 23% with “no precipitous decline,” he said.