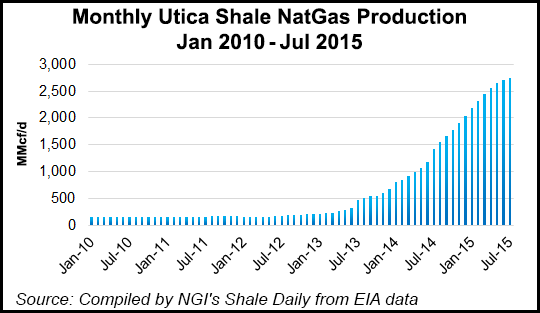 The companies said Thursday that they’ve signed a letter of intent to form the JV, which would be supported by long-term, fee-based service agreements with Gulfport. Under the agreement, Appalachian pure-play Rice Energy, through its subsidiary Rice Midstream Holdings LLC, would own 75% of the venture and construct and operate its assets.

Plans call for constructing a 1.8 million Dth/d dry gas gathering system with interconnects to interstate pipelines such as Rockies Express and Texas Eastern Transmission (TETCO), among others. Gathering and delivery would be aided by the installation of 50,000 hp of compression. A fresh water distribution system would also be designed to deliver fresh water to pads in the area.

The companies plan to invest $520 million in the gathering system and another $120 million in the water assets over the next six years. Construction, they said, is expected to begin soon and first deliveries are slated for mid-2016.

Gulfport would own the remaining 25% of the JV and dedicate 77,000 acres, partially from its Paloma Partners and American Energy acquisitions earlier this year (see Shale Daily, June 10; April 16). Gulfport also plans to contribute an existing 11-mile gas gathering pipeline and a 350,000 Dth/d TETCO interconnect, which are both in Monroe County.

For years now, Rice and Gulfport have been drilling partners within an area of mutual interest in Ohio’s Utica. The companies hope that their latest venture will add value to the relationship. They plan to pursue third-party dry gas gathering and water services opportunities in the area. For Rice, the JV gives it a stronger position in the midstream market by increasing growth potential and creating more dropdown opportunities for its master limited partnership, Rice Midstream Partners LP.

The deal also gives Gulfport “tag-along” rights that would allow it to participate proportionately in potential dropdown transactions and earn more from the midstream market.

Gulfport has increasingly focused on the Utica’s dry gas window, especially as oil prices have dragged down those of natural gas liquids. But its 243,000 net acres in the Utica have consistently outperformed its expectations in recent quarters, and the company has become a leading producer in the play (see Shale Daily, Aug. 7).