Gulfport Energy Corp. officials have reaffirmed the company’s commitment to the Utica Shale, unveiling details of an accelerated, but cheaper, drilling plan coordinated with the construction of much-needed infrastructure in the play. 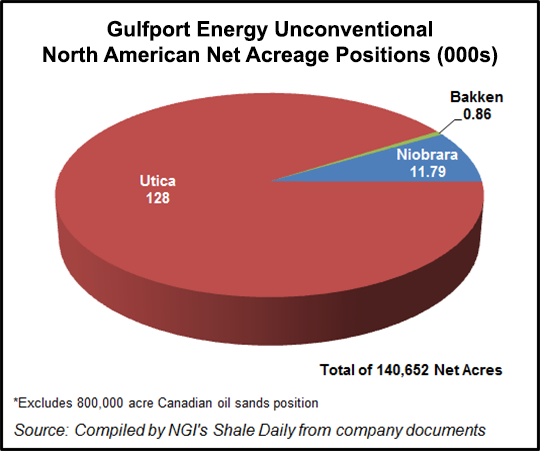 “I’d like to reiterate again that the Utica is our primary go-forward focus, and we are allocating our capital accordingly,” CEO Jim Palm said Wednesday during an conference call to discuss results for 4Q2012 and full-year 2012. “In the Utica, we’ve identified a high-return opportunity that has an enhanced value if we develop at a faster pace than current levels of activity.”

Palm said the Oklahoma City-based company planned to keep three horizontal drilling rigs and two top hole rigs running in the Utica, and was in the process of contracting a fourth horizontal rig to begin work in April. He said Goodrich would save at least $25,000 per day by using top hole rigs to drill the vertical section of each well.

According to Palm, Gulfport spudded 14 gross wells in the Utica in 2012, with two wells producing. Eight wells were completed and in their resting period, two wells were waiting on completion and two wells were being drilled at the end of the year.

Gulfport’s plans in the Utica are dovetailing with those of MarkWest Utica EMG LLC, a joint venture (JV) of MarkWest Energy Partners LP and The Energy and Minerals Group. The JV is developing an integrated system in the Utica to provide low- and high-pressure natural gas gathering systems, natural gas liquids pipelines and processing complexes that would have nearly 800 MMcf/d of capacity and provide 100,000 b/d of C2+ fractionation capacity (see Shale Daily, Jan. 5, 2012).

“We are tailoring our [Utica] drilling program to ensure that we’re able to have wells online and flowing to MarkWest sales as quickly as possible, while also enabling us to do some science at the same time,” Palm said. “During the first half of [2013], we will be actively pad drilling, typically drilling two wells off the same pad location at once. Many wells will be drilled off of existing pads, which will enable us to capitalize on the existing pipeline, the infrastructure and accelerate spud sales cycle times and revenues, by drilling more wells on locations that are currently in service or soon will be in service.”

Palm said Gulfport plans to drill 50 gross wells in the Utica in 2013, “but we just ramped up our drilling rig count earlier, giving us a head start if we decide to accelerate drilling later in the year.” Last month the company said it planned to have 11 horizontal wells online by June (see Shale Daily, Feb. 8).

During the Q&A session with analysts, Palm said Gulfport believes about 17% of the company’s acreage in the Utica is considered to be in dry gas areas, while 70% is in wet gas and 13% is in the oil window. He said Utica wells would be gassier moving east of a line from Chesapeake Energy Corp.’s Buell wells in Harrison County, OH (see Shale Daily, Sept. 29, 2011), and Gulfport’s Wagner and Shugert wells.

“We haven’t really tested it much, so we don’t know exactly what’s going to be to the east of us,” Palm said of the different types of acreage. “Chesapeake has done a lot of drilling north of us and they published some lines. [But] until we drill out there and see a reason to change it, we’re sticking with that.”

Gulfport announced on Feb. 11 that it had entered into an agreement with Windsor Ohio LLC, an affiliate of Wexford Capital LP, to buy approximately 22,000 net acres in the Utica in eastern Ohio for about $220 million (see Shale Daily, Feb. 12). The deal was to close at the end of February, increasing Gulfport’s working interest to 93.8% and boosting its position in the Utica to 137,000 gross (128,000 net) acres.

CFO Michael Moore said the company planned to spend between $458 million and $512 million on capital expenditures in 2013. He said lease operating expenses ($5 to $6/boe), general and administrative costs ($1.50 to $2.50/boe), and depreciation, depletion and amortization expenses ($33 to $35/boe) would all remain unchanged from 2012.

Moore added that Gulfport is anticipating that its production during 1Q2013 will be relatively flat compared to the preceding quarter, and remain in the 6,800 to 7,200 boe/d range due to the infrastructure constraints.

“While production from the Utica has been lumpy and choppy over the past few months, it should even out considerably after the first quarter,” Moore said. “By mid-April, our Utica assets are forecasted to be generating more net production than our other existing areas and should be allowed to grow free of midstream constraints, as MarkWest infrastructure buildout leads our drilling program.”

Moore said the company had “more confidence” in its production guidance for 2013 because MarkWest was close to hooking up the wells Goodrich drilled in 2012.

“That’s right around the corner,” Moore said. “Those wells are going to impact our production dramatically. We’ll get the majority of those wells on in late March or early April, with a few remaining wells coming on in June.

Elsewhere, Palm said Gulfport was “continuing to make some solid wells” and “seeing steady success” in two southern Louisiana fields, Hackberry and West Cote Blanche Bay. According to Palm, production in the Hackberry increased 39% year-over-year (y/y) in 2012. The company spudded 24 wells and completed 19 wells as producers in 2012, and was drilling two wells in the field at the end of the year.

“In addition, we performed 32 recompletions [in the Hackberry],” Palm said. “Currently, we are running two rigs at the field and are drilling ahead on our third and fourth wells of 2013.”

At West Cote, Palm added that Gulfport spudded 31 wells, completed 27 wells, and performed 61 recompletions in 2012. “At the completion of our 2012 drilling program at West Cote, we released the rig in mid-December to return to port for scheduled maintenance,” Palm said. “We recently brought the rig back to the bay and are currently drilling ahead on our first well of the 2013 drilling program at the field.”