Two more operators with dominant footprints in the Appalachian Basin have announced plans to curb some production as oil prices remain low and energy demand is weak because of the Covid-19 pandemic. 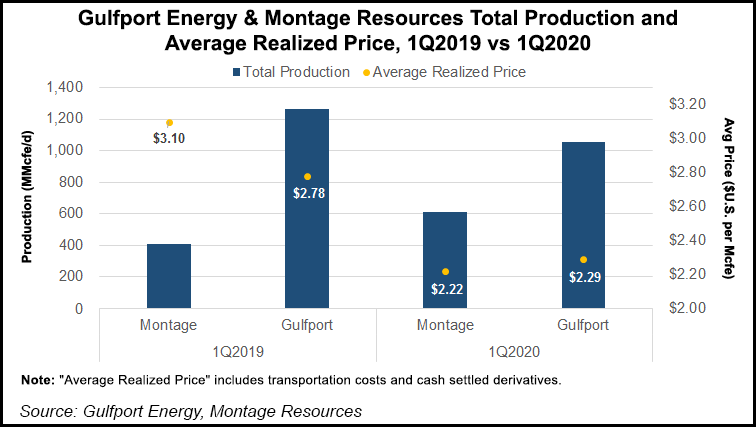 Gulfport Energy Corp., which produces the bulk of its oil and gas volumes in Ohio’s Utica Shale, said it plans to shut-in a minimal amount of output in the coming months, including a large number of vertical wells in its other operating area, the South Central Oklahoma Oil Province, or SCOOP. The shut-ins would amount to less than 20 MMcfe/d, but some of its nonoperated production is likely to be impacted by voluntary curtailments because of low commodity prices.

The company is also exploring opportunities to defer some new production into late 2020 or early 2021, when natural gas prices are expected to be higher. Given the variables, Gulfport withdrew this year’s production guidance of 1.1-1.5 Bcfe/d. Capital expenditures (capex) are likely to come in at or near the low end of the $285-310 million budget because of operating efficiencies, and service cost deflation.

Gulfport produced 1.1 Bcfe in the first quarter, down from 1.3 Bcfe in the year-ago period.

Gulfport’s board also adopted a tax benefits preservation plan last week, which is similar to a shareholder rights plan. The plan was adopted to protect its ability to use net operating losses (NOL) to reduce future tax liabilities. Gulfport had $1.3 billion of NOLs available at the end of last year to offset future taxable income. Such plans are often referred to as poison pills, which are adopted to prevent hostile takeovers, which would limit the NOLs. The company has battled with some shareholders in recent years that are unsatisfied with its direction.

Meanwhile, Appalachian pure-play Montage Resources Corp. said it shut-in some liquids-rich production last month, primarily from assets in the Ohio Utica. The company has since ramped up condensate production, but it expects some level of marginal curtailments to continue until the market improves.

“As oil demand returns and economic conditions improve, we expect to return the remaining production that is currently shut-in and deliver value in excess of what would be realized in the current price environment,” said CEO John Reinhart.

Montage also has cut full-year production guidance by 3% from the midpoint of its previous range to 555-575 MMcfe/d. Like Gulfport, the company said spending would decline this year because of operational efficiencies and service cost reductions. The company is now guiding for capex of $130-150 million, or 10% less than its previous range.