Gulfport Energy Corp. said Friday it is making progress to simplify its portfolio as it zeros in on core assets in Ohio’s Utica Shale and the South Central Oklahoma Oil Province (SCOOP).

While it has larger levers to pull, the company has struck an agreement to monetize what CEO David Wood called a “small footprint” of Marcellus Shale rights overlying a portion of the acreage in southeastern Ohio for nearly $30 million. The company also expects to launch a process soon to divest some water handling and recycling assets it holds in the SCOOP.

Gulfport laid out a plan earlier this year to begin shifting more capital from Ohio to wetter acreage in the SCOOP this year as the outlook for natural gas remains weak. Both plays remain a big part of its plans, however, and the company still has other noncore assets that could be ripe for a sale. Those include its 9.8 million shares of Mammoth Energy Services Inc. and a nearly 11,000 net acre position of oiler legacy assets in southern Louisiana on the Gulf Coast.

The company spent more than expected during the first quarter as it ramped up completions activity, but Gulfport reaffirmed that it’s still on track to hit its 2019 capital guidance range of $565-600 million as it looks to better control costs.

The company completed 25 gross Utica wells and another seven SCOOP wells during the first quarter, setting it up for a more robust turn-in-line schedule heading into the remainder of the year after it brought just nine wells online in both the SCOOP and Utica during the first three months of 2019.

“We plan to progressively turn to sales in excess of 30 gross wells during the quarter, leading to solid production growth and positioning us well as we continue to execute on our 2019 program,” Wood said of 2Q2019 activity.

Gulfport produced 1.264 Bcfe/d in the first quarter, down slightly from both the year-ago period when it produced 1.287 Bcfe/d and 4Q2018, when it reported 1.393 Bcfe/d. The company is targeting flat full-year production that would be roughly in line with its 4Q2018 rate.

The Utica accounted for 993.6 MMcfe/d of first quarter production, while the SCOOP accounted for much of the rest at 259.3 MMcfe/d. 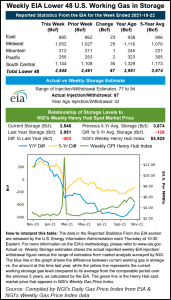 The Energy Information Administration (EIA) delivered no surprises on Thursday, reporting an on-target 87 Bcf injection into storage inventories for the week ending Oct. 22. Natural gas futures were already sharply lower ahead of the EIA report on returning production and stronger wind generation. The November Nymex contract was down 30.0 cents to around $5.900/MMBtu…