Gulfport Energy Corp. is still curtailing Appalachian natural gas production in anticipation of better prices later this year and into 2021. 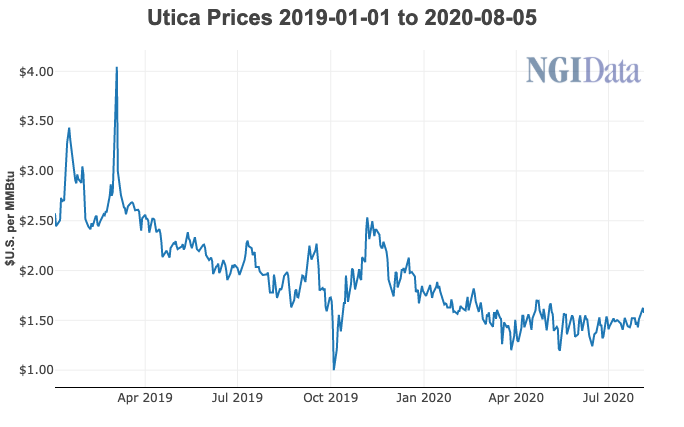 The company made the decision during the second quarter to shut-in some Utica Shale gas production along with vertical oil wells in the South Central Oklahoma Oil Province (SCOOP) because of low liquids prices. Nearly all of the SCOOP wells have returned to production.

“Based on current natural gas pricing, we plan to continue executing on our curtailment strategy, shaping our production profile to peak in the colder months of the year,” Wood said of the Utica curtailments. “This is in line with our updated guidance provided in June.”

“This additional activity provides incremental production late this year and into early 2021 in the anticipation of higher prices during the winter months,” management said.

Gulfport reported a decline in average realized prices during the second quarter, including transportation costs and cash-settled derivatives, of $2.46/MMcfe, compared with $2.52 in the year-ago period. Revenue also fell year/year to $132.4 million from $459 million.

The company recorded a second quarter net loss of $561.1 million (minus $3.51/share) versus net income of $235 million ($1.47) in the year-ago period. The 2Q2020 loss was primarily related to a $532.9 million impairment on the value of oil and gas properties given the decline in commodity prices.