Gulfport Energy Corp. plans to slash spending this year and keep production flat to 2018 levels with a program that generates free cash flow and showcases capital discipline in response to market volatility. 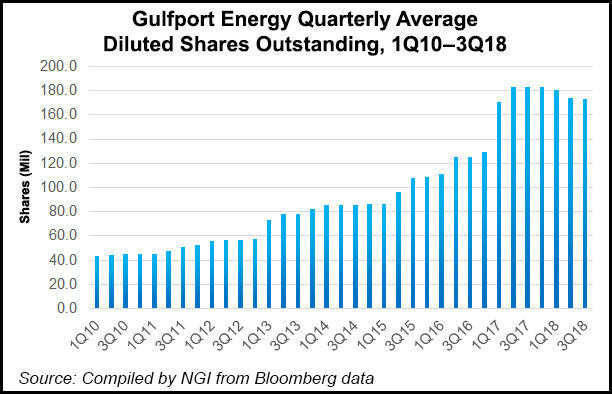 Gulfport also announced a $400 million share repurchase program to be completed over the next two years, which follows a $200 million repurchase recently completed. The announcement came as hedge fund Firefly Value Partners sent a letter to the board in which it said the stock had “massively underperformed” the broader market and destroyed substantial value. Among other things, Firefly urged a $500 million share repurchase program in the letter, which came on Thursday when the board was scheduled to meet about this year’s strategy.

“Our forecasted generation of free cash flow during 2019 is underpinned by our plan to hold fourth quarter of 2018 production relatively constant throughout 2019, allowing us to maximize and prioritize cash flow available for our share repurchase program,” said CEO David Wood, who was appointed last month after his predecessor resigned.

“The current commodity environment is challenged, with depressed natural gas prices in the near-term, an uncertain forecast represented in the strip and, as we have recently experienced, a volatile and unpredictable broader market sentiment,” he added.

Indeed, Gulfport, a gas-weighted player with core operations in the Utica Shale of Ohio and the South Central Oklahoma Oil Province (SCOOP), is the latest operator to cut spending and activity levels. Its peers in other basins have mostly reacted to the slide in oil prices. However, Appalachian pure-play Antero Resources Corp. earlier this month also said it would also cut spending this year.

The Energy Information Administration has lowered its 2019 gas price forecast in its latest Short-Term Energy Outlook as inventories are likely to outweigh consumption. Year/year production is forecast to increase by about 7 Bcf/d to 90.2 Bcf/d.

As pipelines continue to come online in the Northeast, however, and liquified natural gas exports ramp-up, the outlook is expected to improve in the coming years. Wood said Gulfport forecasts a year/year price improvement of about 25 cents/Mcf in 2020.

“I believe the mid- and long-term outlook for North American natural gas producers is favorable, however, we must be disciplined and diligent as we move toward those horizons,” he said.

Gulfport plans to run one rig in the Utica this year and has budgeted to drill 10-11 net wells there with an average lateral length of 11,700 feet. The company also plans to bring between 40 and 45 net Utica wells online.

In the SCOOP, Gulfport plans to run 1.5 operated rigs. It has budgeted to drill 7-8 net wells with an average lateral length of 8,800 feet and turn to sales another 14-15 net wells. The company also has some nonoperated activity planned in both plays.

Wood said the share repurchase program would be funded by free cash flow, which is forecasted at more than $100 million for 2019, and proceeds from noncore asset sales. If those sales occur quicker than anticipated, he said, the repurchase program could be accelerated.

Gulfport holds nearly 10 million shares of Mammoth Energy Services Inc. and has more than 10,000 net legacy acres in Southern Louisiana that it could monetize if oil prices firm throughout the year.

Gabriele Sorbara, an analyst at Williams Capital Group LP, said Gulfport’s financial and production guidance came in lower than expected, but he added that the plan should be received favorably given that it demonstrates discipline and generates free cash flow. Production has also skyrocketed at Gulfport in recent years, especially after it entered the SCOOP in a $1.85 billion deal in early 2017. Net production averaged 719.8 MMcfe/d in 2016 and has since far exceeded 1 Bcfe/d.

In that time, the market has looked to reward tighter spending and become intently focused on better returns as the shale era has evolved. Gulfport’s stock was up by more than 3% on Friday afternoon, trading around $9.11/share.