Gulfport Energy Corp. continues to gain traction in Ohio’s Utica Shale, where increasing production and success from its dry natural gas window helped it to once again beat quarterly guidance. 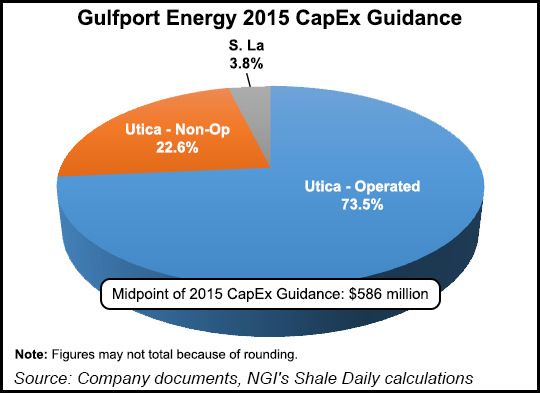 The company’s assets in the Canadian oilsands and on Louisiana’s Gulf Coast have increasingly been set aside in favor of the Utica, where the company has become a leading producer in the last year and plans to spend nearly all, 96%, of its capital budget this year.

The company produced 473.9 MMcfe/d in the second quarter, up from 160.3 MMcfe/d in the year-ago period and 424.4 MMcfe/d in 1Q2015. Second quarter production surpassed management’s expectations and beat previously announced quarterly guidance of 445-455 MMcfe/d, prompting the company to increase full-year guidance by nearly 14% at the midpoint to 517-541 MMcfe/d.

Since May 2014, when Gulfport said it would scale back and focus on the quality of its wells with a restricted choke program and a well inventory aimed at consistency and cutting costs, the company has continued to beat its own guidance (see Shale Daily, May 8, 2014). It has primarily been focusing on dry gas with the steep fall in oil and NGL prices, a move that has appeared to pay off as the company announced long-awaited type curves in its dry and wet gas Utica windows (seeShale Daily, May 7)

“We continue to focus our efforts on the dry gas and lean gas windows of the play and today reiterate our expectations to exit 2015 with total company production of 85%-plus of natural gas,” said CEO Michael Moore during the company’s second quarter earnings call. “As we moved east to the dry gas window, absolute productivity exceeded expectations, and the production rates and pressures we are seeing for these wells are beyond our original assumptions.

“Since bringing on our first dry gas pad during the fourth quarter of 2014, we have subsequently turned to sales an additional 19 gross wells.”

With more data, and accounting for the company’s managed choke program, the company said its Utica type curves would average 2.2 Bcf per 1,000 feet of lateral in its wet gas window, 2.4 Bcf in its dry gas central window and 2.6 Bcf or more in its dry gas east window.

Downspacing has also been a top priority for Gulfport since entering the play. Data from both operated and non-operated wells now have it assuming 750-foot inter-lateral spacing in its wet and dry gas windows. That’s down from 1,000-foot spacing, which would add more than 300 new locations in the Utica for Gulfport. The company said it now has 1,312 net undeveloped locations in the play as a result of the tighter spacing.

The Utica accounted for 457.6 MMcfe/d of production during the second quarter. It drilled nine wells and turned 19 others to sales. On Louisiana’s Gulf Coast, in its West Cote Blanche Bay and Hackberry fields, the company performed 13 recompletions and produced 2,591 boe/d there, which was down from 4,545 boe/d in 1Q2015.

Patrick Rau, NGI director of strategy and research, said company documents make Gulfport’s focus very clear. “To say the Utica is driving operations at Gulfport these days would be an understatement,” Rau said. “The company’s 457.6 MMcfe/d of production from the Utica represented 96% of its total 2Q15 production, and roughly 97% of its 2015 capital expenditure budget is ticketed for that region.”

Gulfport has discussed the possibility of selling its Louisiana assets. Despite its production gains and similar to its peers, low commodity prices dragged down second quarter performance. The company owns a 25% stake in Grizzly Oil Sands ULC, which has mostly idled operations in the Canadian oilsands. Gulfport said its second quarter results included a $15.1 million loss on equity interests.