Gulfport Energy Corp. recently completed and turned to sales its first Woodford Shale wells in the South Central Oklahoma Oil Province (SCOOP), with plans to test two other horizons in the play this summer. 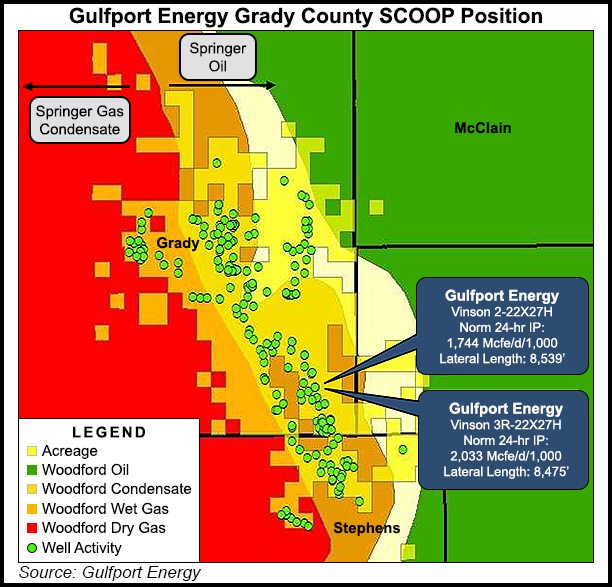 The company turned the wells in line after the first quarter in the wet gas window of Grady County. One had a 24-hour initial production (IP) rate of 14.6 MMcf/d and 57 b/d of oil. The other had an IP of 16.9 MMcf/d and 48 b/d of oil. CEO Michael Moore said production from the wells could increase after they finish cleaning up.

The company closed on its acquisition of the SCOOP acreage in February. The properties were acquired from Vitruvian II Woodford LLC, which drilled the recently completed wells. In addition to the 46,400 net Woodford acres Gulfport acquired, the company estimates that it has 38,600 net Springer Shale acres and 40,000 net acres in the Sycamore formation.

While the company is focusing mostly on the Woodford this year, Moore said it has started the regulatory process for permitting both a Springer and Sycamore location. Ward Petroleum Corp., Moore added, has already tested a successful Sycamore well in Grady County near Gulfport’s acreage position, while Continental Resources Inc. has done the same and has plans to drill up to seven more. Newfield Exploration Co. has also announced an exploratory initiative to test the formation.

“As we look toward Gulfport’s future development plan, the Sycamore represents not only a significant upside to prospective resources across the acreage…but also a potential contributor to increase the liquids mix of our current production base,” Moore told financial analysts during a call this week to discuss first quarter results.

The company beat guidance to produce 849.6 MMcfe/d, up from 692.2 MMcfe/d in the year-ago quarter and 787 MMcfe/d in 4Q2016. Gulfport leaned on the Utica Shale in Ohio while it spent time learning more about the SCOOP. Utica production during the first quarter was 750.7 MMcfe/d, compared to 172 MMcfe/d from existing assets in the SCOOP and 15.7 MMcfe/d from the company’s legacy Gulf Coast assets.