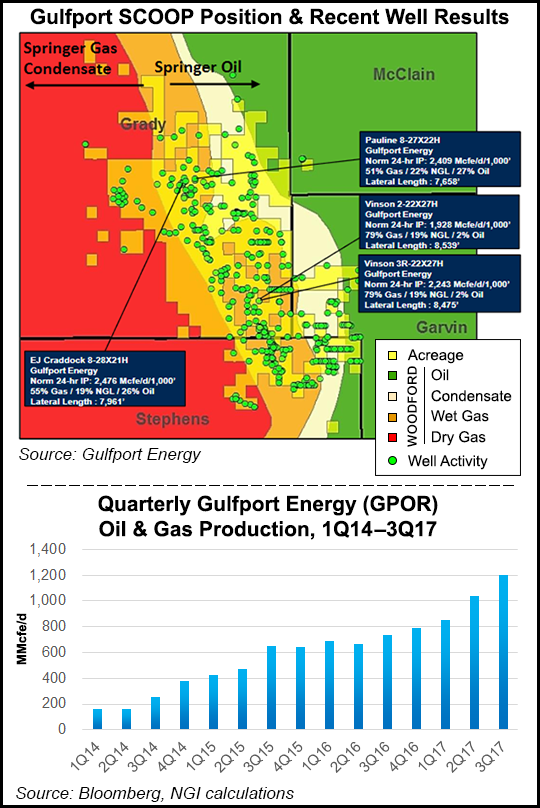 Third quarter production was up 63% compared to the same time last year and 16% from 2Q2017, consisting of 88% natural gas, 8% natural gas liquids and 4% oil. The company also beat the high-end of its 1.17-1.18 Bcf/d guidance for the period, repeating beats in both the first and second quarters this year.

Gulfport entered the Midcontinent earlier this year after it acquired 85,000 net acres there. The company has spent most of the year getting familiar with the assets, but has recently released a series of well results that it claims are meeting expectations. Gulfport is focused primarily on the Woodford Shale, but it also has drilled test wells to the Springer Shale and Sycamore formation.

The company’s average realized prices for the third quarter dropped from $2.87/Mcfe in the year-ago period to $2.41/Mcfe. Gulfport will release more details about its results Nov. 2 when it reports third quarter earnings.

The company reiterated its natural gas price forecast for the remainder of the year, saying it expects to realize an average of 62-68 cents/Mcf below New York Mercantile Exchange settlement prices. Financial analysts are also hoping to hear more from management on next week’s earnings call about the company’s plans for 2018, when Gulfport has said it would spend within cash flow and target 30% year/year production growth.