The National Hurricane Center (NHC) on Tuesday was tracking a tropical storm in the central Gulf of Mexico (GOM) and another, weakening storm off the northern coast of South America, and both could pose threats to U.S. offshore natural gas and oil operations. 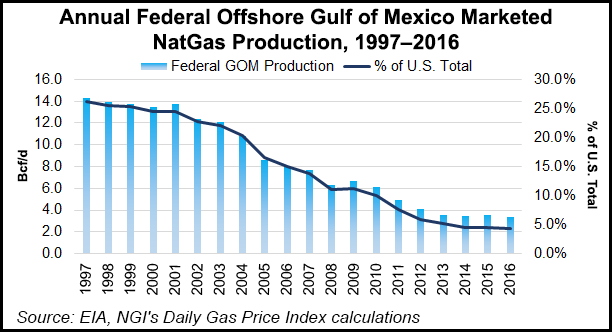 A disturbance located about 355 miles southeast of Galveston, TX, was upgraded to Tropical Storm Cindy Tuesday. The storm, characterized by heavy rain, was stationary Tuesday afternoon but was expected to begin moving slowly to the northwest later in the day, with a turn toward the north-northwest forecast for early Thursday.

Cindy was expected to be near the southwest Louisiana coast late Wednesday or Wednesday night and move inland over western Louisiana and eastern Texas Thursday. On Tuesday it carried maximum sustained winds near 45 mph with higher gusts, NHC said. A tropical storm warning was in effect from High Island, TX, to the mouth of the Pearl River, and a tropical storm watch was in effect from west of High Island to San Luis Pass, TX.

NHC was also tracking Tropical Storm Bret, which had 40 mph winds and was moving to the west-northwest at 23 mph about 185 miles east-southeast of Curacao. Bret was picking up speed and becoming disorganized as it moved into the Caribbean.

“On the forecast track, Bret or its remnants will continue to move across the southeastern Caribbean Sea for the next couple of days,” NHC said.

GOM operators were monitoring the tropical weather systems. “We have completed steps to secure our facilities, non-essential personnel have been evacuated from our platforms and at this time there have been no impacts to production,” BP plc said Tuesday afternoon. “BP’s severe weather assessment team is in constant communication with our offshore teams. Our top priority is the safety of all personnel and protecting the environment.”

Anadarko Petroleum Corp. said Monday afternoon that it was removing non-essential personnel from its GOM facilities as a precautionary measure. “Although there have been no impacts to production at this time, we are prepared to shut in our facilities if necessary to ensure the safety of our personnel and to protect the environment,” an Anadarko spokesman said. Chevron said Tuesday that tropical weather had not affected its operations in the Gulf.

There could possibly be a storm surge with “inundation of 1 to 3 feet above ground level is
possible along the coast in portions of the Tropical Storm Warning area.”

Destin Pipeline said a shutdown of the Okeanos Gas Gathering Pipeline that had been scheduled for Monday (June 19) had been delayed due to weather. Receipt points at Nakika, Thunder Horse and Thunder Hawk “will continue to be available until further notice,” Destin said in a notice of operations issued on Monday.

The 2017 Atlantic hurricane season officially began on June 1, but was presaged by Tropical Storm Arlene, a rare pre-season storm that formed in April over the eastern Atlantic.

The season is likely to have above-normal activity, according to forecasters at the National Oceanic and Atmospheric Administration’s (NOAA) Climate Prediction Center. NOAA forecasters expect 11-17 named storms to form in the Atlantic Basin this year, with five to nine of them becoming hurricanes, including two to four major hurricanes (Category 3 or higher).

Those numbers are higher than earlier predictions by two other prominent weather forecasters. In an extended range forecast released in April, scientists at Colorado State University said they expected slightly below-average activity in the Atlantic Basin this year, with 11 named storms, of which four are expected to become hurricanes, including two major hurricanes. AccuWeather meteorologists have said they expect 10 named storms in the Atlantic this year, of which five could become hurricanes, including three major hurricanes.

A combination of fewer tropical storms and a lessening reliance on GOM oil and natural gas production (thanks to the growth in production from inland shale plays) has kept hurricane-related damage to the nation’s energy infrastructure and markets to a minimum in recent years.