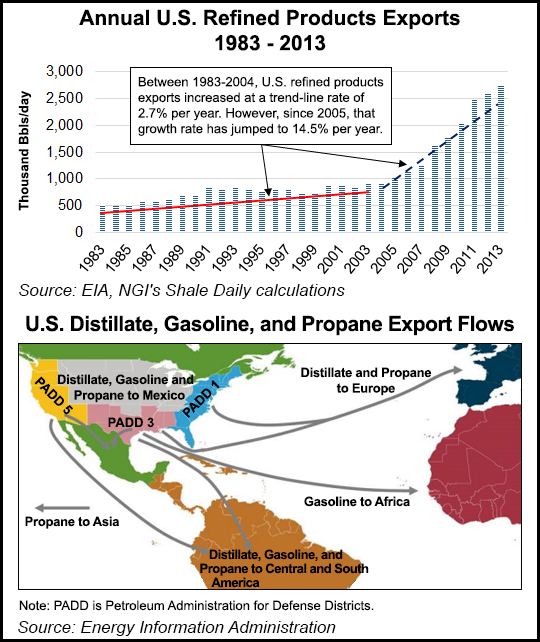 The terminal on the Neches River in Beaumont, TX, can load at rates up to 15,000 bbl per hour. It includes a dock with a 40-foot draft that can accommodate Panamax-size vessels that have a capacity of up to 400,000 bbl. The terminal has access to more than 12 million bbl of refined products storage and receives products from eight refineries, representing 3.3 million b/d of capacity, as well as from the Colonial Pipeline Co. pipeline.

Resumption of terminal operations required dredging, new pipeline construction and the installation of new loading arms and vapor-recovery systems. The work was done with the support of shipper commitments, Enterprise said. Plans for the terminal include a second dock and significant on-site storage for blending components. The project was announced one year ago (see Shale Daily, May 31, 2013).

“A dramatic increase in domestic crude oil production, driven by the shale revolution, combined with lower domestic demand for motor gasoline and expanded refining capacity along the Gulf Coast, has transformed the U.S. into a net exporter of refined products in less than seven years,” said Jim Teague, COO of Enterprise’s general partner. “By converting our Beaumont marine terminal, we are able to provide shippers with a more timely solution that further strengthens the Gulf Coast region as the primary gateway for refined products exports.”

The terminal began exporting distillate and plans are to add gasoline export capability during the third quarter, Enterprise spokesman Rick Rainey told NGI’s Shale Daily. The terminal also will have the capability to export jet fuel.

Thanks to the shale boom, refineries in the United States have become more active participants in the Atlantic Basin gasoline market, EIA said in a report last December. “Average U.S. Gulf Coast exports to Latin America for the period January through September [2013] increased from 74,000 b/d in 2011 to 96,000 b/d in 2012, and have averaged 105,000 b/d in 2013,” EIA said.

For full year 2013, gasoline exports increased by 45,000 b/d, averaging 550,000 b/d for the year, EIA said in April, and exports in December set a monthly record of 770,000 b/d. Besides Africa, Central and South America as well as Mexico saw increases in the importation of gasoline from the United States, EIA said.

And the boom is continuing this year, according to the agency, which noted in a report last week that U.S. crude prices remain discounted to those for Brent. “Additionally, relatively cheaper natural gas prices in North America continue to provide U.S. and Canadian refineries with further energy feedstock price advantages compared with refineries in other parts of the world. Preliminary financial results from the first quarter suggest that North American refiners are maintaining higher profitability than their European rivals,” EIA said.