U.S. natural gas exports have barely touched the global markets, and buyers with Gulf Coast projects underway are tapping at the doors to secure supply for the next wave. 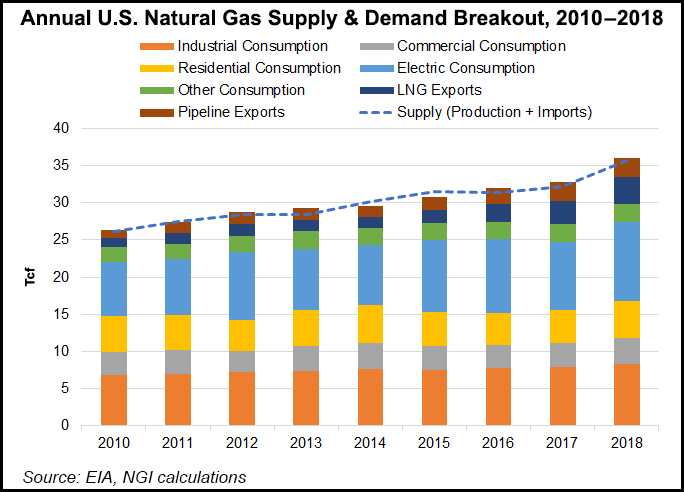 Golden Pass expects to acquire up to 2.6 Bcf/d for the three-train, 15.6 million metric tons/year (mmty) project, which was sanctioned earlier this year. Golden Pass is adjacent to Cheniere’s Sabine Pass export facility, now aiming for six trains. Sempra Energy’s proposed Port Arthur LNG project is slated to be next door.

With the biggest gas exporter and the Port Arthur project on deck, “that should capture your attention,” Hammad told the audience. “That’s three huge LNG projects right next to each other” able to serve “a whole lot of demand…”

Golden Pass is relying on the expertise of its deep-pocketed global sponsors, a joint venture of ExxonMobil Corp. and Qatar Petroleum, which have built similar projects around the world.

“When it comes to gas supply, a producer is going to try to sell his gas for as much as he can, and a buyer will buy the gas for as little as he can,” he said. “We are not simply buying from XTO. We’re in the hunt like everyone else, and we will effectively seek opportunities from the broader public.”

With five storage tanks in place able to hold 17 Bcf, along with a 69-mile, 42-inch diameter intra- and interstate system, the former import facility has “a pretty good starting point,” Hammad said.

The three-train system would start “right off the bat…Naturally, they’ll be staggered, about six months apart…And we will generate our own power” with each train having a waste heat recovery system, i.e. a steam generation unit, and 100 MW steam turbine generators.

As other buyers are scrambling to secure contracts, Golden Pass has long-term tolling agreements that were secured for the original import project. That means it is making “as much money today from our import business as we would have made if we were 100% full.”

The focus now is to ensure suppliers “that we’re here, we’re real, we’re now. We’re buying gas. We want to talk to you because 2.6 Bcf/d is a lot of gas.”

Sempra LNG’s Jim Diemer, regional vice president of midstream commercial development, said the overall goal is to have about 45 mmty of LNG operating “in the next five or six years.”
The unique gas portfolio is covering all the bases. The first train at Cameron LNG in Louisiana, able to export up to 12 mmty, “is up and running,” with the second and third trains set to begin operating next year. Trains four and five also are “fully permitted.”

The 11 mmty Port Arthur project in Sabine Pass is set for sanctioning in 2020, with cargoes expected to begin moving in 2024. And the proposed EnergÃ­a Costa Azul project on Mexico’s Pacific coast could ramp up its first exports in 2023.

About 70% of Port Arthur’s offtake has been sold, and there are “ongoing conversations for the remaining offtake,” Diemer said.

When the 2 Bcf/d Gulf Coast Express began moving constrained Permian Basin gas south in September, “there was a reaction through the Gulf Coast market,” Diemer said. “As our additional loads come on, there are going to be more and more responses to a very competitive market.”

Sempra LNG, which is “effectively owned by a large gas utility,” takes a holistic view of the market, he told the crowd. “We want to be there every single day. But we also look at things from the operator’s perspective. We’re not just a developer.”

An export project is a “30-year facility. The gas world now is long,” as gas flows from the north to the south. That wasn’t always the case, and Sempra wants to be prepared if the vagaries of the market were to change. “We expect something similar to happen…and we don’t want to be bundled to that…We want diversity.”
For example, the granddaddy of the unconventional gas plays, the Barnett Shale in North Texas, “is now almost nonexistent.” The Marcellus and the Utica shales are huge today, but they’ve been impacted by the giant flow of associated gas from the Permian and growing supply from the Haynesville Shale.

Having the foresight to ensure there are connector pipelines and storage facilities provides operators with “lots of options,” Diemer said.

Operators now are working with the market to find the “best solutions to overcome constrained areas.” Today, many of those constraints are in Northern Louisiana.

“We know of over 20 pipeline projects, some not publicly announced,” Diemer said. There’s “a lot of capital changing the market,” and “a lot of push coming toward this LNG load pocket” in the northern part of Louisiana close to Texas.

As Diemer sees it, “it’s important to control our own destiny…We ultimately will build what is necessary. We’re perfectly content with third parties providing services to us. We’ve been very active in that regard to talking with a lot of pipelines out there.”

In the last six months or so, he estimated that 4 Bcf of incremental pipeline supply has been sanctioned to move gas to the Gulf Coast, with another 4 Bcf that could be announced by the end of the year.

“That’s 8 Bcf of supply breaking through this area,” Diemer said of the Gulf Coast export market.

As far as prices, don’t expect Sempra to be driven by basis blowouts on any given day, as “pipelines are lumpy and LNG facilities are lumpy,” he said.

“What happens when there is an unplanned outage? Those are not going to be aligned perfectly with gas day…When plants come online, they are not aligned with another timely nod. LNG is much too valuable.” Operators “want to produce as much as you can because it is much more valuable.”

Venture Global’s chief commercial officer Tom Earl is involved in three Gulf Coast export projects. The 10 mmty Calcasieu Pass terminal in Louisiana already has been sanctioned. Venture Global also has proposed two other LNG projects, Plaquemines and Delta, which both would be sited in Plaquemines Parish.

“In the end, if the United States is going to continue to compete successfully and increase exports, it is going to have to do more of what I would say America does best,” Earl told the audience. His words of advice: innovate how capital is raised and reduce costs.

The LNG sector today is growing faster than any other sector of the energy business, he said. Global LNG supply is forecast to finish this year at around 345 mmty, marking 9% growth year/year.

From Venture Global’s perspective, “the picture that we see around the world is an extremely rosy picture on demand…” That goes hand in hand with a “fiercely competitive market for LNG in terms of supply contracts…”

To effectively compete for global LNG share, the United States has to innovate and reduce costs, Earl said.

“Bigger and bigger trains is no longer better,” he said. “We need to control costs better and standardize.”