More exposure to the Gulf Coast, along with improved differentials in the Northeast, continued to push up Rex Energy Corp.’s realized prices in the first quarter, according to preliminary results released by the company on Monday. 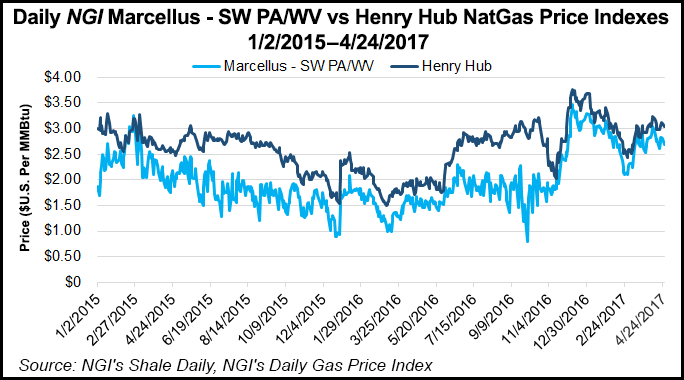 Excluding hedges, Rex’s realized natural gas price increased 42% to $3.16/Mcf from 4Q2016, when it reported an average price of $2.23/Mcf. That was also well above the $1.37/Mcf reported in the year-ago period. The company started moving half of its natural gas production in Western Pennsylvania to premium markets on the Gulf Coast and in the Midwest last November.

“One of the most important highlights of the quarter was our price realizations, with the strong results underlining the importance of our marketing initiatives and current marketing portfolio,” said CEO Tom Stabley. “With a full year of Gulf Coast transport and improved differentials in the Northeast markets, we expect to see improved realizations throughout the year.”

Firming prices at Mont Belvieu and a better market in the Northeast also helped lift liquids prices to an average of 59% of the West Texas Intermediate price. That’s up from a 56% average in 4Q2016. The company said in March that it expects to earn similar prices for its liquids throughout the year, which could find it targeting wetter production in 2018.

While production declined during the first quarter, Rex came in only slightly below the Street’s expectations as it looks to wrap-up a program that’s been mostly focused on drilling to hold acreage in Ohio and Pennsylvania. The company reported 173.4 MMcfe/d for 1Q2017, down from 194.9 MMcfe/d in 4Q2016 and 200 MMcfe/d in the year-ago period. First quarter production consisted of 36% liquids.

Rex also recently sold its Illinois Basin and noncore Utica Shale assets in southeast Ohio. It has two four-well pads and another six-well pad scheduled to come online later this year in its Butler Operated and Moraine East areas in Western Pennsylvania. Stabley said those wells will not only help with its plans to hold acreage by production, but also set the company up for production growth in the second half of this year.