A steadily improving U.S. supply picture sealed the move lower for natural gas futures on Thursday. The November Nymex gas futures, already down early in the session, slid further after the latest government inventory report and settled at $5.115/MMBtu, off 5.5 cents from Wednesday’s close. December slid a steeper 10.1 cents to $5.346. 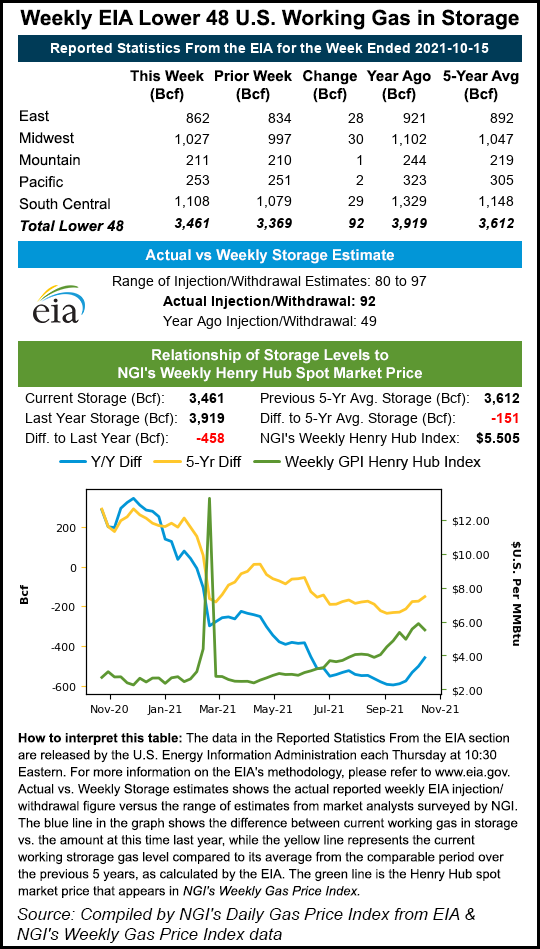 With little change in the weather forecast, all attention in the futures market was squarely on the latest government inventory report. Ahead of the report, analysts were expecting a higher injection than last week, owing to the sharp rebound in wind generation from the prior week’s lows. Major surveys had coalesced around a 90 Bcf injection. NGI modeled a higher 95 Bcf build.

The actual Energy Information Administration (EIA) figure for the week ending Oct. 15 was 92 Bcf, which fell within the wider range of expectations. The stout increase was the sixth in a row that came in above the five-year average, according to EIA. The five-year average for the latest reference week was 69 Bcf, while the year-ago injection was 49 Bcf.

The November Nymex contract hit an intraday low of $5.006 on the storage news, but recovered later in Thursday’s session.

Bespoke Weather Services said it expected the latest injection to be looser week/week given the flip in wind generation. “It was just a matter of exactly how much.”

Broken down by region, the Midwest led injections with a 30 Bcf increase in inventories, according to EIA. South Central injections totaled 29 Bcf, including a 15 Bcf build in nonsalt facilities and a 14 Bcf build in salts.

The East added 28 Bcf into stocks, while the Pacific and Mountain regions each saw inventories rise by the single digits.

Bespoke said it considered the total 92 Bcf build a “fairly neutral number,” which doesn’t change its outlook for the next few weeks. It continues to view storage inventories approaching 3,650 Bcf by the end of October.

Bespoke’s outlook comes amid a backdrop of persistently warm weather this fall. Any blasts of cool air largely have been relegated to the West Coast. While a brief cold front is expected in the East this weekend, a quick warmup is forecast shortly thereafter.

Long-range outlooks are barely starting to show signs that crisper air could arrive in the United States in November. DTN’s Week 4 forecast begins to dislodge the longstanding blowtorch pattern with a cool air mass starting to infiltrate the West.

Space heating demand could climb 29 gas-heating degree days week/week from week 3, boosting natural gas demand by 7.0 Bcf/d. EBW Analytics Group said further cool risks to this pattern across the central and eastern United States were possible if a faster transition occurs, but most of the cooler temperatures may wait until week 5.

“After a blazing October, the gas market understandably appears to be waiting for cold to roll forward into the 11- to 15-day window before believing it,” EBW analysts said. “If the current forecast verifies, however, recent weakness in Nymex natural gas could quickly reverse higher.”

That said, the correlation between Nymex futures and global pricing has largely decoupled over the past week. Though significant global price swings can still influence U.S. gas trade, a more robust storage trajectory in the Lower 48 has reduced the risk of Nymex futures converging with European or Asian gas prices in all but the most extreme scenarios.

At the same time, widespread cold weather also has yet to materialize in Europe, meaning storage fears on the continent may soon begin to abate, according to EBW. Inventories are about 74% currently, but forecasts show a continuation of the mostly warm weather pattern that’s been in place throughout the fall.

Maxar’s Weather Desk said mild temperatures were projected over most of Europe in the six- to 10-day period, except in Scandinavia where some below-normal readings are expected. The pattern is one that gains influence from ridging aloft in Southern Europe, helping to usher in warmer temperatures to the continent from the Atlantic.

The European ensemble forecast, meanwhile, suggested a positive phase of the East Atlantic pattern, which historically supports warmth in most areas, except in the North. The Weather Desk also said the negative North Atlantic Oscillation could support warm anomalies in southeastern Europe.

“Nonetheless, the potential for a perturbed polar vortex increases the risk for extreme outcomes across the northern hemisphere,” EBW said. “Even a loosening correlation could see Nymex gas futures post meaningful gains in the unlikely event Europe experiences an early-season Arctic outbreak.”

Spot gas prices continued to strengthen Thursday, with several weather systems pummeling the West and East coasts and ushering in chillier temperatures in the coming days.

The line of storms moving through the Pacific Northwest was forecast to continue through the weekend, with some snow and plenty of rain for the drought-stricken region. Temperatures on the East Coast, meanwhile, were expected to remain warm Thursday before the cold snap delivers a shot of fall to the region beginning Friday.

“Not only will the coldest air of the season arrive, but the first frost for many areas is likely, and even some brief snowfall could fall in some locations,” AccuWeather senior meteorologist Alex Sosnowski said.

Daytime temperatures are forecast to trend downward across the region by 15-30 degrees from Thursday to Sunday, according to AccuWeather. During the depths of the chilly pattern from Sunday to Monday, daytime highs were forecast to range from the mid-40s over the northern Appalachians to the upper 60s around the Chesapeake Bay.

“It is not that this new burst of chilly air will be so abnormal for the second half of October, as it will not be, but what makes it stand out is the lack of chilly air so far this season for the Northeast,” AccuWeather senior meteorologist Joe Lundberg said.

The crisp air boosted gas prices in the region. Algonquin Citygate next-day gas jumped 13.5 cents to $4.650. A larger increase was seen upstream in Appalachia, where Texas Eastern M-3 Delivery shot up 47.5 cents to $4.575.

Price gains were smaller on the West Coast, where prices have remained elevated throughout the summer and for much of the fall thus far. SoCal Border Avg. spot gas picked up 15.5 cents to average $5.550. In the Rockies, the Cheyenne Hub rose 18.0 cents to $4.865.

Similar price increases were seen across the rest of the country.