Drilling and completion technology advances are powering North America’s natural gas supply growth, but down the value chain near the burner tip, the gas industry is burdened by outdated regulatory policies and needs new technology and innovation to capitalize on gas supply, speakers said at IHS CERAWeek in Houston Wednesday. 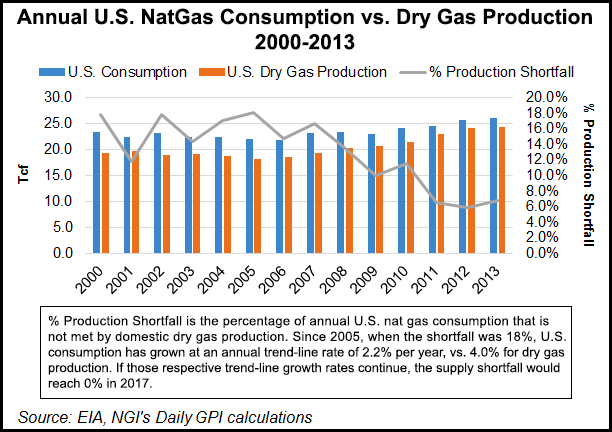 “For many decades natural gas regulation was based on assumptions of resource scarcity. These regulations need to be re-evaluated in light of new realities,” said a new IHS Energy study on capitalizing on shale gas, which was referenced by American Gas Association CEO Dave McCurdy during a presentation.

McCurdy said the energy sector has not seen as much emphasis on the downstream side of the value chain as on the upstream. Power generation and industrial/petrochemical end-use applications of natural gas have gotten a lot of attention for their ability to grow demand, as well as exportation of liquefied natural gas. However, there is room to grow demand on the residential and commercial side, and that demand growth can coexist with industrial growth and exports, McCurdy said. “There is no need to pick winners and losers.”

Direct use of natural gas in homes can and should grow, he said. “There’s a lot of policies and commonsense approaches that need to be looked at. Natural gas is a tool today for economic development at all levels. Those policymakers who really understand this approach can use it to great benefit…”

Traditional growth of gas local distribution companies (LDC) comes from the addition of customers. During the last recession, that all came to an end for LDC Northwest Natural Gas in Oregon, said Keith White, Northwest Natural vice president of business development. However, last year, growth returned to 1.3% after languishing below 1% for the previous five years, he said. Going forward, growth opportunities will be different for LDCs than they were in the past, White said.

On the industrial/petrochemical side, Northwest Natural Gas is working with the would-be developer of two methanol projects in Washington that would be fueled with gas flowing through the utility’s distribution pipelines (see Daily GPI, Jan. 23). Just one plant would require enough gas to equal the utility’s current total system load, White said.

LDC gas demand could also benefit from a rethink and redesign of the old-fashioned natural gas meter, which is too bulky for many applications. “When you get into a high-rise where floor space is at a premium, those don’t work,” White said. The industry is working with manufacturers of gas-fueled heating systems to shrink their footprints and make them more attractive to more potential end-users. “We need to re-size our end-use equipment to serve those customers,” he said.

Andrew Sunderman, CFO of natural gas and electricity retail energy provider Direct Energy, also said a regulatory rethink would allow for increasing residential and commercial gas demand. For instance, in Texas, which is a market served by Direct Energy, natural gas is the marginal fuel for power generation. Through the rollout of smart thermostats, customers could be empowered to shave their demand and have a significant impact on prices while stabilizing the natural gas and power markets.

In the Northeast, infrastructure limitations in transmission and distribution pipelines are holding customers there from benefiting from cheap gas supplies. For instance, in Connecticut, only about 40% of energy consumers have the ability to access natural gas. Infrastructure development, where needed, should be incentivized, Sunderman said.

“Growing natural gas use in the United States is not just about using more,” the IHS analysis said. “The efficient use of natural gas and other forms of energy should continue to be a policy imperative. Cost-effectively increasing overall energy efficiency throughout the economy will require that energy policy, regulation and consumer fuel choice be grounded in full fuel-cycle analysis of energy requirements and costs.

“In many cases, increased use of natural gas to displace less efficient sources of energy may improve the overall energy efficiency of the economy.”

The availability of natural gas in North America is no longer in question, said Paula Gant, deputy assistant secretary for oil and natural gas at the U.S. Department of Energy. “We’ve got a lot of gas in the ground and we can get it where we need it,” she said. “Make no mistake about it, we are the envy of the world. Everywhere that I go, everyone that comes through Washington, there’s one question: How did you do it?”

According to Energy Information Administration data, U.S. dry gas production since 2005 has grown at a trend-line rate of 4.0% per year, which easily outstrips domestic trend-line demand growth of 2.2% per year over the same time period.