Natural gas and petroleum consumption is rising in Asia faster than supply is growing, potentially shifting trade patterns and infrastructure investments, according to the U.S. Energy Information Administration (EIA). 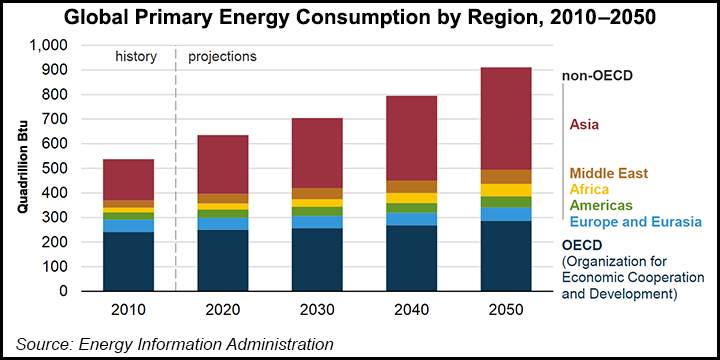 Global energy consumption, led by Asian countries that are not part of the Organization for Economic Cooperation and Development (OECD), will grow by nearly 50% between 2018 and 2050, EIA said in its International Energy Outlook 2019 (IEO2019), which was released Tuesday.

“Energy consumption was greater in Asia than in any other region in 2018, and we project that consumption will almost double between 2018 and 2050, making Asia both the largest and fastest-growing region in the world for energy consumption,” said EIA Administrator Linda Capuano. “This long-term trend of Asian energy consumption to support growing economies strongly influences the extraction, refining, and transport of oil, natural gas, and other fuels.”

Economies in countries outside the OECD account for nearly all of the projected growth in petroleum product consumption between 2018 and 2050, as growing populations and economic growth result in increased consumption of energy, EIA said. “Non-OECD Asia accounts for about three-quarters of EIA’s projected global increase in liquid fuels consumption through 2050. India, in particular, is projected to experience rapid industrial growth and increased demand for motorized transportation.”

The industrial sector is expected to account for more than 50% of global end-use energy consumption through 2050. Economic activity for energy-intensive manufacturing, which includes production of iron and steel, food, paper, refined oil products, non-metallic minerals, aluminum, and basic chemicals, is increasingly concentrated in fast-growing economies of Asia. EIA is projecting India and China will account for more than half of global output from energy-intensive manufacturing between 2018 and 2050 in the IEO2019 reference case.

The reference case also forecasts a 79% increase in electricity generation through 2050 as a result or increased electricity consumption in all end-use sectors.

“With the rapid growth of electricity generation, renewables — including solar, wind, and hydroelectric power — are the fastest-growing energy source between 2018 and 2050, surpassing petroleum and other liquids to become the most used energy source in the reference case,” EIA said. “Worldwide renewable energy consumption increases by 3.1% per year between 2018 and 2050, compared with 0.6% annual growth in petroleum and other liquids, 0.4% growth in coal, and 1.1% annual growth in natural gas consumption.”

At the same time, global natural gas consumption is expected to increase more than 40% between 2018 and 2050, with total gas consumption reading nearly 200 quadrillion Btu by 2050. In addition to the gas used in electricity generation, consumption is expected to increase in the industrial sector, with chemical and primary metals manufacturing, as well as oil and natural gas extraction, accounting for most of the growing industrial demand.

In an Industry Outlook report released this week, the American Petroleum Institute (API) said the increasing use of natural gas for electric power generation in the United States has helped drive the nation’s carbon emissions to their lowest levels in a generation while lowering consumer energy expenditures.

“With natural gas we have proven that economic growth and the reduction of carbon emissions are not mutually exclusive,” said API chief economist Dean Foreman. “The fact that the U.S. has led the world in the reduction of carbon emissions for nearly two decades wouldn’t have been possible had it not been for the abundant supply of affordable and clean natural gas made possible by the shale revolution.”