The global natural gas and industry undoubtedly will see a dramatic pullback in sanctioned projects this year, with only 10 of more than 50 now in the pipeline likely to proceed, with well financed deepwater and niche liquefied natural gas (LNG) facilities the possible bets to rise above the carnage, according to Wood Mackenzie. 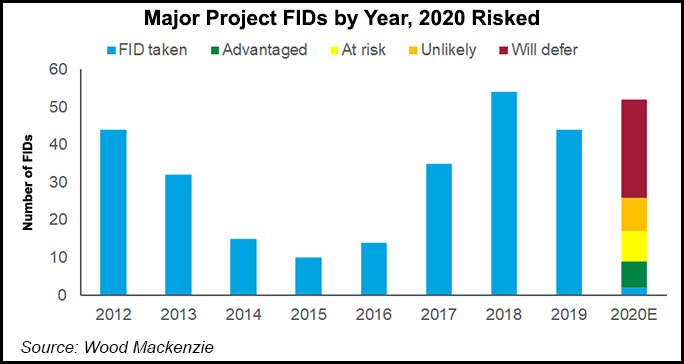 Researchers said Thursday nearly all global oil and gas projects still in the pre-final investment decision (FID) phase are going to be paused or scrapped.

“Of the 50-plus projects we identified with potential to go ahead this year, only 10 have a chance of proceeding, but all are at risk,” the global natural resources consultancy said.

Wood Mackenzie upstream researcher Rob Morris said an estimated $110 billion of investment “will almost certainly be deferred, with another $100 billion at risk. New committed investment could be as low as $22 billion if only the most advantaged projects progress.”

Balance sheet strength and the “strategic drivers” of various projects are likely to be “much more important than project economics,” he said. “Only those with the strongest balance sheets will even contemplate major project FIDs.”

The majors and some of the national oil companies, both with deeper pockets, will most likely take the lead on FIDs in 2020. Projects with “financially stretched” partners, as well as those at the higher end of the cost curve, will struggle to move beyond the drawing board.

The low cost of oil, which has been wavering of late under $30/bbl, may put many projects at risk, even though efficiencies have improved economics.

Of unsanctioned projects possibly getting the greenlight this year, the deepwater oil and a few “niche LNG” facilities dominate the list, according to Wood Mackenzie.

Advantaged deepwater oil from projects underway in Guyana and Brazil, among others, as well as some LNG projects, such as low-cost greenfield and feed gas backfill at legacy liquefaction projects.

However, “two-thirds of all greenfield projects, representing $110 billion of total future investment, face almost certain deferral,” Morris said. “Some project sanctions will be delayed to 2021 and beyond. Some will be completely reworked or even put on hold permanently. These include projects with weaker strategic drivers, high breakevens, and/or financially distressed operators.”

Projects not yet sanctioned in Africa, the North Sea, Southeast Asia and some Australian LNG proposals “face mass project deferrals. Australian LNG is perhaps the most high profile casualty.”

Woodside Petroleum Ltd.’s Scarborough and the Barossa LNG export project by Santos Ltd., both in Australia, each have announced they will defer until market conditions improve, he noted.

“Project deferrals now will mean huge volumes of pre-FID production at risk from the mid-2020s. Projects previously targeting a 2020 FID would have contributed 1.8 million b/d of liquids and nearly 20 Bcf/d of production.”