The U.S. onshore oil and gas industry is against the wall with the unconventional boom in its 15th year, now facing accelerated insolvencies and a wave of consolidation, according to new research. 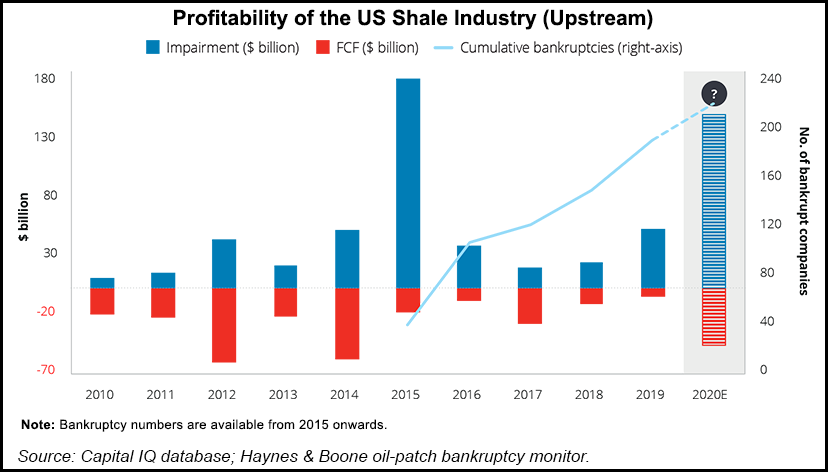 Second quarter earnings may bring a “surge of asset impairments” as U.S. operators that work in shale and other tight resources enter a period of “great compression,” Deloitte researchers said Monday.

“The history of oil and gas is filled with periods of extensive consolidation,” said Deloitte LLP’s Duane Dickson, vice chairman. “Following a 15-year boom, the U.S. shale segment appears to be next. As Covid-19 impacts amplify pressures on shale companies through 2020, a wave of impairments may prompt the deepest consolidation the industry has ever seen over the next six to 12 months.”

According to the study, the unconventional E&P sector in aggregate may writedown the value of their oil and gas assets by as much as $300 billion, “with significant impairments” in 2Q2020. “As a result, the leverage ratio of the industry could increase from 40-54%, potentially setting off a chain reaction of insolvencies and restructuring.”

The U.S. Energy Information Administration earlier this month predicted exploration and development would decline in line with lower crude prices, which in turn would reduce the value of proved reserves. Some operators already have signaled sharp one-time impairments, including  BP plc, which said it could write down the value of up to $17.5 billion of assets.

Close to 30% of unconventional explorers are “technically insolvent” when West Texas Intermediate (WTI) crude is around $35/bbl and around half are insolvent when crude is averaging $20, Deloitte noted.

WTI futures were trading slightly above $37/bbl around midday Monday.

“The great compression could have lasting and domino effects,” researchers said. “New telecommuting norms, regionalized trade and supply chains, a new fuel order, and stable business profile of new energies have fast-forwarded the specter of peak demand to the present.”

Separate independent analyses and data have warned recently that peak fossil fuel demand may be in sight as the pandemic crushed oil and gas energy demand. Goldman Sachs said renewable power investments may be the largest area of spending in the energy industry in 2021.

Oil prices have recovered from sub-zero levels earlier this year from a combination of shut-ins and activity cuts, as well as moderately rising demand as lockdowns are eased worldwide, Deloitte noted. However, researchers said it remains to be seen “if oil prices will return to $50-60/bbl in 2020.”

As domestic E&Ps face “these new realities, the reverberations could extend beyond the U.S. shale industry and have a domino effect across the oil and gas value chain,” according to Deloitte.

In reviewing the operational and financial health of top U.S. onshore E&Ps, Deloitte found that only 27% were “augmentors,” which represents value-accretive targets for supermajors and large independents. Conversely, around one-half of the major E&Ps were identified as “superfluous” or risky bets for potential buyers.

That means “any large acquisition or merger should be considered only if ‘one plus one is greater than two,’ on both operational and financial fronts,” researchers said. The question may be as important about what to buy as what not to buy, they said.

“The short-term outlook for U.S. shale is undeniably challenging, but E&Ps should regard the great compression as a unique opportunity for reinvention,” said Deloitte Consulting LLP’s Scott Sanderson, principal, oil and gas strategy and operations practice. “Selective consolidation among producers in the short-term can help revitalize the industry and better position it for the future.

“Especially as the energy transition moves forward, investment in big data, advanced digitalization and sustainability measures can be of paramount importance to long-term survival and success.”