America’s first solar eclipse visible across the Lower 48 states since 1979 will be seen most intensely in 14 states on Monday, and it promises to shine new light on natural gas capacity, foreshadowing what energy planners see as a future dominated increasingly by renewable energy resources. 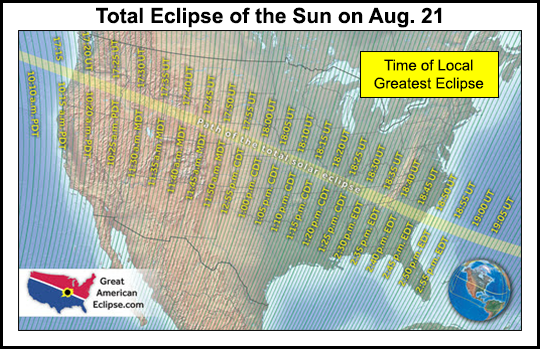 The energy angle, however, pales compared to a larger socio-economic sidelight in which millions of people are expected to travel to areas across the country where viewing will be best. The anticipation has reached a frenzy in some prime-viewing locations, driving up lodging and food costs to celestial levels.

Throughout the nation, the “Great American Eclipse,” so named because so many millions of Americans should be able to view it, albeit with safety eyewear or indirectly, will test a combination of natural gas, hydro, conservation and technology in maintaining energy flows during the period of diminished solar sources.

The full focus of the eclipse is limited to a 70-mile-wide corridor from Oregon to South Carolina. While the hype is full-blown for the public, utility experts view the event as a glimpse of the future transformed U.S. electricity grid and the back-up, balancing role for natural gas-fired generation and other resources.

Earlier this year, the North American Electricity Reliability Corp. (NERC) published a white paper on the eclipse, drawing on an assessment of the 2015 solar eclipse in Europe. NERC noted that the more diversity of power sources on the grid, the more impact an eclipse can have.

The European eclipse in 2015, said NERC, demonstrated “a great deviation in the amount of solar generation that was available before, during, and post eclipse which caused the need for far more advanced coordination of primary, secondary, and tertiary reserves across Europe within a reduced time frame (10-15 minute intervals).”

During the eclipse, “making up the difference will be a balancing act of high-tension electricity choreography conducted by grid operators across the country,” according to an official with the California Independent System Operator (CAISO), which expects to see the biggest impact from the solar event.

“They have to make sure that power plants aren’t down for maintenance, for example, and that pressure in natural gas feeder lines remains constant to prevent hiccups in other power generation units.”

Perhaps nowhere is the impact more intensely anticipated than in California, which relies on an abundance of renewable generation, including solar resources. California’s goal is to have half of its electricity from renewable sources by 2030, and with solar capacity now approaching 10,000 MW, the state is a litmus test.

CAISO CEO Steve Berberich earlier this month expressed confidence in the state’s technology and grid, and “the abilities of our staff to manage operational challenges associated with the eclipse. We are learning much about emerging shifts in operations that will define the electric system of tomorrow.”

Monday is hyped as the latest lesson for CAISO management, and power will continue to flow in the nation’s most populous state, he said. CAISO’s Nancy Traweek, executive director of system operations, said the lessons learned also would be used to prepare for the next North American solar eclipse scheduled to occur in 2024.

There is fun and business nationwide mixed in with the event. CAISO has invited media to its Folsom headquarters to watch the eclipse and see first-hand how grid operators work to balance resources on the largest solar powered high-voltage grid in the nation. The California Public Utilities Commission (CPUC) and Energy Upgrade California are joining with the City of San Francisco for a viewing at the civic center plaza.

San Francisco-based Pacific Gas and Electric Company (PG&E) has been preparing for the eclipse for more than a year and expects no impact to its customer electric service. To reduce the potential effects, PG&E’s energy grid operators have a plan that includes:

“Solar eclipses are rare but we deal with the equivalent of a total eclipse every night when the sun goes down,” PG&E CEO Nick Stavropoulos said. “Even with so much of California’s energy now coming from solar, PG&E has a diverse supply of resources that allow us to meet customers’ needs for safe and reliable energy around the clock.”

More than 300,000 of PG&E’s customers use rooftop solar, which is 25% of all rooftop solar in the nation. Customers may lose some rooftop solar generation during the eclipse, but customers “won’t see any impact to their electric service due to the reliability and flexibility of the electric grid,” the utility said.

Meanwhile, Sempra Energy’s San Diego Gas & Electric Co. (SDG&E) is prepared for a nearly 60% blockage of the sun, which could result in a loss of up to 500 MW of solar-generated electricity, or about 14% of its power supplies. SDG&E COO Caroline Winn said even with significantly less solar, the combination utility has secured enough resources to meet customer needs following months of planning.

Nationally, estimates vary on how much of the growing reliance on solar-generated megawatts would be temporarily blocked by the eclipse, but even conservative guesses envision several thousand megawatts, perhaps up to 10,000 MW, eliminated during daylight hours across the country. Estimates in California attributed to CAISO run as high as 6,000 MW.

“It would be difficult to speculate about how the resource mix will end up on eclipse day as our market will award lowest-cost bids and then dispatch accordingly in the day-ahead time frame with any incremental energy needed made up in the real-time market,” said CAISO spokesperson Steven Greenlee, who noted the two principal replacements for solar are natural gas and hydroelectric.

“We feel anecdotally that as the dominant fuel, natural gas, will be in the mix, but to what degree is unknown,” Greenlee told NGI last Monday. “We expect hydropower will also bid in as well as other renewables,” including biofuel and geothermal, which “may have some capacity above their normal schedules. And then there is the unknown regarding wind.”

“It could be that some clouds reduce the loss of forecasted solar output, and if that is the case, then it, too, could affect what resources are awarded bids” on the grid, he said. In sum, CAISO officials wouldn’t speculate how much extra gas supplies may be needed.

Southern California Edison Co. (SCE) this week said it expects the region to experience a 58-76% partial solar eclipse from 9 a.m. to noon, with the effect of a cloudy or overcast day as opposed to a “darkened sky.” SCE gets about 10% of its power supplies from solar, a spokesperson said.

“SCE expects no operational issues with our system due to the eclipse, and we have accounted for the anticipated reductions in solar production in our forecasts and planning for the day,” said Vice President Paul Grigaux, who handles transmission operations.

California could face a shortfall of up to 6,000 MW for a period of time, he said, and “to compensate, CAISO and the utilities will balance the state’s energy needs by adding power generated by hydroelectric and natural gas plants and customers should not notice any effect during the eclipse.” SCE’s transmission/distribution operations should see “minimal” effects from the eclipse.

For the CPUC, CAISO, and the California Energy Commission, the eclipse has been treated as “an opportunity to highlight California’s large and growing adoption of solar power, and the new opportunities for conservation this energy source presents,” a CPUC spokesperson told NGI.

The state energy agencies backed efforts by nonprofit Energy Upgrade to encourage consumers to conserve power during the prime time for the eclipse in the state, 9-11 a.m.

“We lead the nation in energy efficiency, but we can all do more,” said CPUC President Michael Picker, adding that when the moon comes between the earth and sun, it is good time to increase conservation efforts.

PJM Interconnection, which operates North America’s largest power grid, plans to provide snapshots of the PJM load curve during the eclipse to visually demonstrate the impact. PJM expects no reliability issues in its footprint, which includes 13 states and the District of Columbia.

“Certainly, this is an unusual solar event, but as far as potential impacts to the grid, PJM and its members are prepared,” said CEO Andrew L. Ott. “While this is an anticipated event, we routinely plan and prepare for unpredictable events or things that can’t be forecast far in advance, such as severe storms and heat waves.”

PJM expects a temporary reduction in solar power of up to 2,500 MW, with “sufficient reserves” to replace generation. Certain states may experience a bigger impact, including North Carolina, which would experience a complete solar eclipse, and New Jersey, which has more photovoltaic solar generation than most other the states served by PJM.

About 500 MW of solar generation is connected to the PJM grid. Another 2,000 MW is generated by rooftop solar panels that serve individual consumers. Although growing in the region, solar generation comprises less than 1% of PJM’s 185,000 MW of generation capacity.

Rock and roll fans who also want to share in the excitement can join the Royal Caribbean cruise where passengers will witness Bonnie Tyler singing her hit, “Total Eclipse of the Heart” in an outdoor theater on the ship Oasis, as part of its “Total Eclipse Cruise.” The cruise ship was to depart from Florida for the Caribbean on Sunday and be positioned in the path of totality for the pivotal moment on Monday, which is to last less than three minutes.

For those unable to join the cruise or find solar eyewear, television news stations plan to broadcast coverage of the event. ABC at 1 p.m. ET is presenting “The Great American Eclipse,” a two-hour special, from Charleston, SC.