Phillips 66 Partners LP (PSXP) attributed record earnings in the second quarter to higher volumes for its pipelines and terminals, as the partnership completed an open season for a crucial crude oil pipeline link to serve the booming Permian Basin and Eagle Ford Shale. 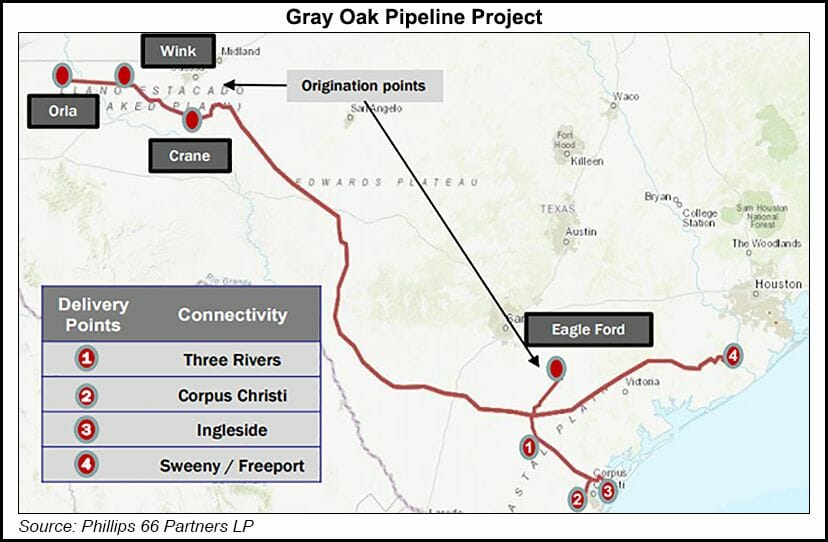 Houston-based PSXP’s $2 billion Gray Oak Pipeline system would have initial capacity of 800,000 b/d based on shipper commitments of 700,000 b/d, with the remaining reserved for walk-up shippers. Gray Oak is expandable to about 1 million b/d. The pipeline would transport Permian crude from the West Texas counties of Crane, Reeves and Winkler, along with crude from the Eagle Ford, to its Sweeny Hub near Houston and a new terminal in South Texas near Corpus Christi.

Gray Oak is a joint venture between PSXP, which holds a 75% stake, and Andeavor, which holds the remaining 25%. Enbridge Inc. has an option to acquire up to one-third interest, which if exercised would shrink PSXP’s stake to 42.25%.

During an earnings call last Friday to discuss 2Q2018, COO Tom Liberti said PSXP is “right on track” with right-of-way permitting for the Gray Oak system.

“The Gray Oak pipeline is our largest organic project to date and demonstrates our financial strength to take on projects of this scope and magnitude,” Liberti said. “Gray Oak expands our footprint into the high growth Permian Basin with strong customer driven demand for crude oil takeaway capacity for the Gulf Coast.”

In Corpus Christi, Gray Oak would connect to the South Texas Gateway Terminal, a deepwater terminal under development by Buckeye Partners LP, which is to be operator. Buckeye holds a 50% interest in the terminal, while PSXP and Andeavor each hold a one-quarter stake. Initial storage capacity for the terminal is 3.4 million bbl, which is expected to start up by the end of 2019, coinciding with the startup of the Gray Oak pipeline system.

Phillips 66 announced a $1.5 billion expansion of natural gas liquids (NGL) fractionation capacity at its Sweeny Hub in June, by building two 150,000 b/d fractionators. In response, PSXP said it would expand its NGL storage capacity at Clemens Caverns to 15 million bbl from 9 million bbl. The expansion is expected to be completed in late 2020.

The board of PSXP’s general partner declared a 2Q2018 cash distribution of 75.2 cents/unit on July 18, a 5.3% increase over the previous quarter’s distribution (71.4 cents). PSXP said it has increased its distribution for every quarter since its initial public offering in July 2013, and is on pace to meet its goal of a 30% five-year distribution compound annual growth rate by the end of 2018.

Total debt outstanding was $2.9 billion at the end of the second quarter with $151 million in cash/cash equivalents and $750 million in its credit facility. PSXP also spent $179 million on capital expenditures during 2Q2018, including $169 million on expansion and $10 million on maintenance costs. The $169 million expansion included spending on the isomerization unit, Bayou Bridge, Sand Hills and Gray Oak.