If necessary, New Hampshire should go it alone to secure natural gas pipeline capacity to feed power generators and combat high costs for heat and electricity, rather than wait for other New England states to act in concert, Tennessee Gas Pipeline Co. LLC (TGP) told the state’s Public Utilities Commission. 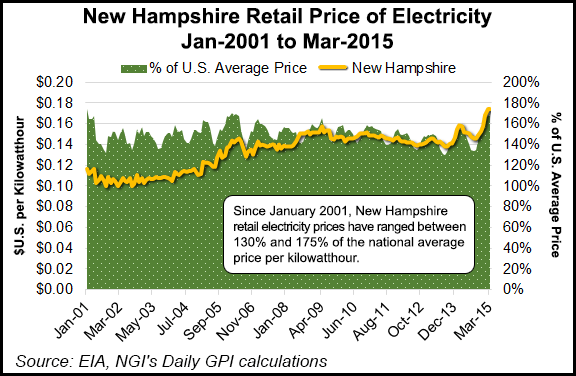 TGP said it supports allowing New Hampshire electric distribution companies to contract for pipeline capacity that would be made available to gas-fired generators and recovering the costs of those capacity contracts from retail electric customers to reduce natural gas and electricty prices in New Hampshire.

TGP’s Northeast Energy Direct (NED) project (see related story) is being promoted by the company as a cure for chronically high natural gas and power prices in New England states, which are essentially in the backyard of the booming Marcellus Shale gas patch. “New Hampshire should prioritize commitments to pipeline project(s), one of which must include Tennessee’s NED project…” the pipeline said.

Last year TGP offered Maine a 20-year capacity deal on NED under the state’s Energy Cost Reduction Act, which authorizes the Maine Public Utilities Commission to acquire up to 200 MMcf/d of pipeline capacity for up to 20 years. Massachusetts, which also would receive gas supplies via NED, has questioned whether the project is even needed and has raised concerns about its environmental impact (see Daily GPI, Sept. 18, 2014).

Massachusetts does need more pipeline capacity, at least according to a recent study. An analysis of eight different scenarios indicated that through 2019 “electric generators have insufficient supply of natural gas, which results in spiking natural gas prices,” according to the report (see Daily GPI, Jan. 12).

According to ISO New England, New Englanders paid approximately an additional $7 billion in electricity costs in the winters of 2013-2014 and 2014-2015, TGP said. “ISO New England has also noted that although total use of electricity in New England dropped 2% in 2014 compared to 2013, the average price for wholesale electricity rose 13% in 2014, with the increase largely due to the increase in the cost of power plant fuel, particularly natural gas. TGP agrees with ISO New England’s assessment,” the pipeline said.

Regardless whether other New England states go along, New Hampshire should step up, the Kinder Morgan Inc. pipeline said.

“In the absence of a comprehensive agreement among the New England states, it is in New Hampshire’s interest to also pursue, on an independent and parallel track, unilateral efforts to underpin incremental pipeline capacity into the region for the benefit of New Hampshire energy consumers,” TGP said in its filing of comments with the state PUC, which is investigating ways to “ameliorate adverse wholesale electricity market conditions in New Hampshire.”

In arguing for its project, TGP said New Hampshire should sign up for NED capacity, even if it means its neighbors get a “free ride” on the project. “If New Hampshire acts unilaterally, other New England states that do not contract for additional pipeline capacity will also receive the benefit of lower natural gas and electric costs, but such potential ‘free ridership’ should not deter New Hampshire from pursuing an initiative to achieve electric savings for customers in this state.”