Pennsylvania Gov. Tom Wolf visited Pittsburgh on Friday to meet with lawmakers, business leaders and other stakeholders, as his administration begins to escalate its role in helping to fortify the economic development that’s expected to stem from Royal Dutch Shell plc’s decision to build a multi-billion dollar ethane cracker in the state. 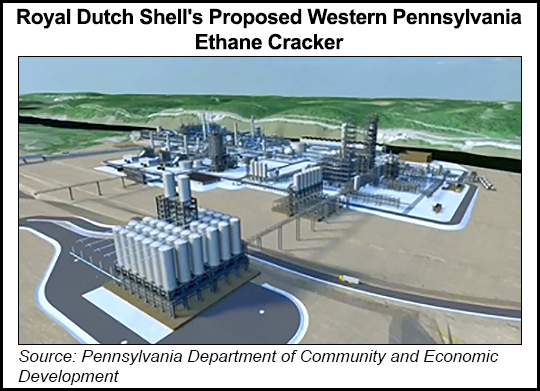 At a roundtable discussion downtown at JLL Inc., a commercial real estate firm that worked with Shell during the site selection process, Wolf called the cracker transformational and said it’s likely to change the economic landscape, not just in Western Pennsylvania, where it will be located, but for the rest of the state as well.

“There’s a dynamism here, an energy; a lot of really, really good things are happening,” Wolf said of Pittsburgh’s growth in recent years. “I want to do what I can to keep that going. And one of the big game-changers is the cracker plant.

“What I want to talk about today is what do we need to do to make sure we have the skills, the infrastructure, to make sure that we’re ready not just for the cracker plant — which is going to be big in and of itself — but for all the other jobs that are going to come to this area and to Pennsylvania because of this,” he told roundtable participants.

Shell has already spent millions of dollars on site preparation and administrative work for the facility, which would be built on the site of a former zinc-smelting plant next to the Ohio River in Potter and Center townships in Beaver County, about 30 miles northwest of Pittsburgh (see Shale Daily, March 4).

Given that activity, many industry and state officials believed the cracker would eventually be built. But in the weeks since Shell made a final investment decision to move forward with the plant, they’ve seemed equally surprised, marveling at the work that now needs to be done to build on the decision during recent discussions about the regional economy and how it can accommodate a robust petrochemical industry (see Shale Daily, July 5; June 27).

Shell said in June that it would build the cracker, which would have a capacity to process more than 100,000 b/d of ethane to make 1.6 million metric tons/year (mmty) of polyethylene and 1.5 mmty of ethylene — key building blocks for plastics (see Shale Daily, June 8; June 7).

Participants in Friday’s roundtable discussed a jumble of issues from capital constraints and infrastructure issues to housing and transportation. But the primary focus was on workforce development as Shell prepares to break ground and after the facility is up and running.

During construction, which is set to begin in December 2017, Shell expects to employ 6,000. Once the facility is operational, sometime in the early 2020s, it would employ 600. Based on public reports of similar projects, the Wolf administration said, the projected economic impact of the cracker is estimated to be $6 billion.

Wolf recently signed the state’s 2016-2017 budget. He has focused heavily on education spending, pushing to secure an additional $200 million in basic education funding and a nearly $40 million increase for higher education this year. Stakeholders on the roundtable asked Wolf to continue beefing up support for universities, community colleges and trade schools across the state to better prepare the workforce for the construction of the cracker and similar projects in the future.

There were also concerns about employing enough Pennsylvanians at the worksite and the facility once it’s operational. “I think we might be in a crunch,” said Rich Stanizzo, business manager of the Pittsburgh Regional Building Trades Council, about the area’s ability to meet Shell’s demand for labor.

Early in the planning process, he said, initial estimates called for roughly 12,000 construction workers on the site. Stanizzo said the region currently has a base of about 40,000 tradesman to draw from at any give time. With calls for as many as 1,200 electricians, 1,200 pipefitters and more than two dozen crane operators, Stanizzo said it’s going to be difficult to source manpower locally, conceding that some with the necessary skills would likely have to travel from the Gulf Coast.

Allegheny County Executive Rich Fitzgerald said one of the region’s last major projects was the construction of Heinz Field, home of the Pittsburgh Steelers. Fitzgerald said the cracker is “like building 25 Heinz Fields, $6 to $7 billion.

Wolf called the challenges “interesting” and the “start of something really big.” He credited former Gov. Tom Corbett, who participated in the roundtable, for landing the facility in the state.

“From my perspective, I don’t think any of us can reason completely where this is going to go,” Corbett said. “I view the cracker itself as the first seedling of an oak tree.”

Corbett challenged the participants to be thinking decades ahead, as he anticipates more building along the shores of the Ohio River as it’s revitalized with Shell’s cracker and additional oil and gas-related development.

Absent from the roundtable were members of the upstream and midstream industries, which will be responsible for supplying the cracker with feedstock. Similar to other state officials across the Appalachian Basin, Wolf, who held another roundtable in Beaver County on Thursday, is just beginning to gather input about what more can be done to help build the region’s petrochemical industry.