Five Republican senators have urged Environmental Protection Agency (EPA) Acting Administrator Andrew Wheeler to review an Obama-era “handbook” that covers Section 401 of the Clean Water Act (CWA), and to work with other federal agencies to determine whether new guidance or regulations are needed to clarify the law.

In a letter dated Oct. 4, the senators said a review of the handbook and other EPA materials is necessary “in light of recent abuses by certain states” to block or delay infrastructure projects, including interstate oil and gas pipelines.

“In the last few years, a troubling trend directed at fossil energy projects has arisen,” the senators wrote. “A select number of states have hijacked Section 401 to delay or block the development of natural gas pipelines and a coal export terminal. While the focus of these abuses today is fossil energy, the approach could be used to target any type of project that is disfavored politically.”

The letter was signed by Sens. John Barrasso and Mike Enzi of Wyoming, Shelley Moore Capito of West Virginia, Steve Daines of Montana and Jim Inhofe of Oklahoma, each of whom were also co-sponsors of legislation introduced last July that called for clarifying Section 401.

The senators said to their knowledge, the most recent EPA document on Section 401 is an interim handbook from 2010 that was issued by the Obama administration. But EPA didn’t solicit public input for the handbook, and the document “contains clear misstatements of law,” they said.

Wheeler was urged to work with other federal agencies to ensure that they “have consistent, coordinated direction” on Section 401. They specifically mentioned FERC and the U.S. Army Corps of Engineers, two agencies that have been on the front line in the debate over several natural gas pipeline projects, many of which remain in limbo.

Constitution Pipeline Co. LLC in June asked the Federal Energy Regulatory Commission for a two-year extension to build a proposed pipeline because of the New York State Department of Environmental Conservation’s (DEC) denial of a Section 401 permit. One month earlier, Transcontinental Gas Pipe Line Co. LLC (Transco) re-filed for a 401 permit from the DEC for its Northeast Supply Enhancement Project.

New Jersey regulators have yet to issue a 401 permit for the PennEast Pipeline, and last May took the unusual step of asking the U.S. Court of Appeals for the District of Columbia Circuit to review FERC’s certificate order authorizing the project. However, last month, the U.S. Court of Appeals for the Third Circuit rejected a similar challenge to Transco’s Garden State Expansion project, which is complete and entered service in March.

A three-year saga over Millennium Pipeline Co. LLC’s Valley Lateral project ended in July after FERC gave final authorization for the pipeline to enter service. Millennium and FERC had sparred with the DEC over the New York agency’s refusal to issue a 401 permit for the project, with FERC arguing that the DEC had waived its authority to issue one because it took longer than the one-year timeframe to make a decision.

FERC in January found the DEC had not waived its authority in denying a 401 permit for the Constitution Pipeline. FERC denied Constitution’s request for a rehearing in July.

The bitter dispute between FERC and the DEC caught the attention of the Trump administration. Department of Energy Secretary Rick Perry, during testimony before a House panel in May, questioned whether states have the right to block natural gas pipelines. There was speculation that the Trump administration could decide to issue an executive order to rein in states opposed to pipelines, such as New Jersey and New York.

Senate Bill 3303, aka the Water Quality Certification Improvement Act, would strike and insert language throughout the CWA, thereby amending the portions that address water quality certification. The bill is still before the Senate Environment and Public Works Committee, which Barrasso currently chairs. 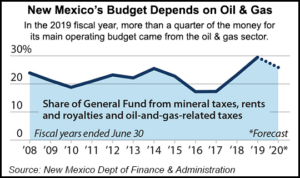