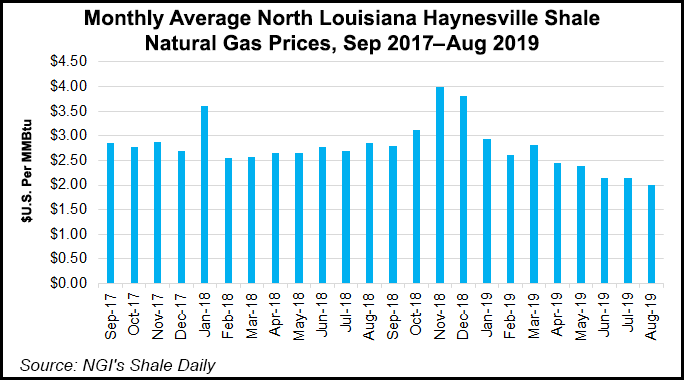 “An important component of our strategy is strong production volume growth while maintaining flat or fixed cost on the majority of our operating expenses, which therefore results in material reductions and per unit cash operating costs,” CEO Gil Goodrich told analysts during a call to discuss second quarter results. “The results of this strategy are well illustrated in the second quarter…”

Capital expenditures fell to $25 million from $31 million, while per-unit cash lease operating expenses (LOE) decreased by 35% from a year ago and 23% sequentially to $1.02/Mcfe.

Operationally, the producer is running one rig in the core of the Haynesville in Northwest Louisiana. It recently completed the Melody Jones 20H-1 well, a 4,600-foot lateral in DeSoto Parish, whose 24-hour initial production rate was 22 MMcf/d on a restricted choke.

“The quality of our North Louisiana core Haynesville acreage is allowing us to continue rapidly growing our production” and “expand our cash margin while delivering top-tier returns with conservative yet improving debt metrics,” Goodrich said.

Goodrich also has 100 MMcf/d hedged through the rest of the year at $2.89/Mcf. That represents slightly more than 72% of reported second quarter volumes.

“Although we can’t control commodity prices,”the CEO said, “we have a nice hedge book that at the midpoint of guidance locks in over 70% of our annual volumes at $2.89 and our per unit cash operating costs are falling as expected, driving very good margins, capital efficiency and a superior return on our capital employed.”

The company is continuing to “watch the natural gas markets closely and in particular, the longer term strip prices for both capital planning and incremental hedging opportunities.”

Production guidance for the full year is set to average 135-145 MMcfe/d.

“Given our second quarter volumes and current production, we remain confident in these numbers based on our current plans for the second half of the year,” Goodrich said.

“In addition, the guidance provides the anticipated ranges for per unit cash expenses,” which include lease operating expenses, taxes, transportation, and general/administrative costs, “each of which was within or at the low-end of the range in our reported second quarter results.”

The independent entered the year with 99 net well locations on spacing of 880 feet between well bores. It now expects to complete 9.3 net locations this year.

“We continue to focus at a minimum on replacing the inventory that we drill with bolt-on acquisitions as we have done in the past,” Goodrich said. “The acreage in North Louisiana is approximately 75% undeveloped and 73% operated. We have graded our acreage with a plan to maximize long laterals and expect to continue to swap acreage or drill joint wells with offset operators to further increase our long lateral inventory and operatorship percentage.”

Goodrich also has “upside exposure to crude” by maintaining its Eagle Ford Shale and Tuscaloosa Marine Shale assets, the CEO noted. However, all of the capital and all of the activity is now centered in the Louisiana Haynesville.

Asked if the company might sell the assets outside of Louisiana, Goodrich said he was open to proposals.

“It’s something that we don’t plan to necessarily market through a data process, but we are open to outright sale or joint venture if the price is right for someone who’s interested.”