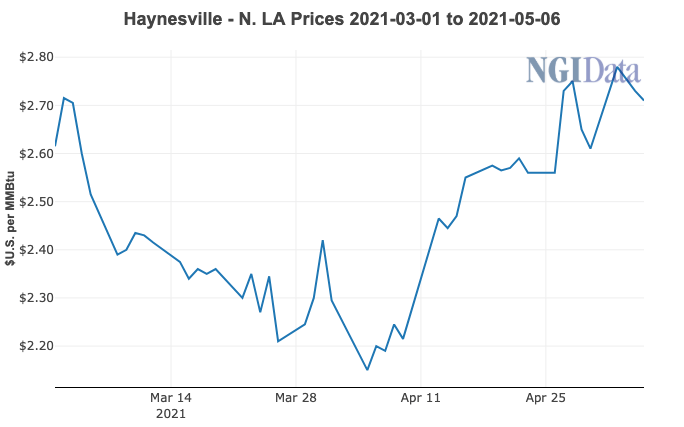 “The core of the Haynesville continues to offer low development and lifting costs, top-tier cash margins and returns on invested capital, as well as the ability for us to both grow and deliver free cash flow at current commodity prices,” CEO Gil Goodrich said Thursday during an earnings call to discuss first quarter results.

He added that “numerous new well additions late in the first quarter and subsequent to the end of the quarter have us very well-positioned to deliver strong results in the second quarter.”

The company expects production to average 150,000-160,000 Mcfe/d during the second quarter, and is maintaining full-year guidance of 160,000 Mcfe/d at the midpoint, up 20% year/year. Guidance was revised downward slightly due to the impacts of Winter Storm Uri in February and curtailment of nonoperated volumes.

The company expects to fetch a 15-25 cent premium to Henry Hub prices for its production.

If current strip pricing is an indicator, “we’re obviously going to be at the high range of that free cash flow guidance range, and then we’re doing our best to control our operating cost,” said COO Rob Turnham.

Capital expenditures (capex) totaled $29.3 million for the quarter, with a majority going toward drilling and completion costs, versus $18.4 million in the prior year period, management said. The Houston-based firm is reaffirming its full-year preliminary capex budget of $75-85 million for 2021, but it may adjust guidance if necessary “based on commodity prices and the goal of free cash flow generation from moderate growth in volumes and a further reduction in per unit costs,” management said.

Goodrich also got some good news on the credit front. Management said that for the spring redetermination under Goodrich’s reserve based lending facility, the company and participating banks have reaffirmed the existing borrowing base of $120 million.

Goodrich completed nine gross wells during the first quarter, and said some of its production “was negatively impacted by weather.”

The company plans to deliver 17 gross wells (9.5 net) this year, with an average net lateral length of around 7,500 feet.

Goodrich recently completed the Lattin 3&34 No. 1 well northeast of its Bethany-Longstreet field in DeSoto and Caddo parishes.

“This is certainly one of, if not the best, well we’ve ever drilled,” Goodrich said during the call.

Goodrich’s return on invested capital (ROIC), an increasingly important metric for courting oil and gas investors, stood at 38% at quarter-end, which management said was better than many of its peers.

As for environmental, social and governance initiatives, Goodrich told analysts, “Our objective is zero gas flaring and we essentially achieved that in 2020.”

The company has hedges in place covering 100 MMcf/d of gas production for the balance of 2021, or about 63% of production at the midpoint of guidance. The hedged production comprises 70 MMcf/d of swap volumes at a blended average price of $2.54/Mcf and 30 MMcf/d of collar volumes at a floor of $2.50 and a ceiling of $3.50/Mcf.

Profits were impacted by a $3.3 million loss on derivatives not designated as hedges during the quarter, versus a gain of $9.1 million in the year-ago period.