Goodrich Petroleum Corp. is buying a 66.7% working interest in producing assets and about 277,000 gross acres in the Tuscaloosa Marine Shale (TMS) for $26.7 million as it continues to build scale in the play and improve its drilling performance. 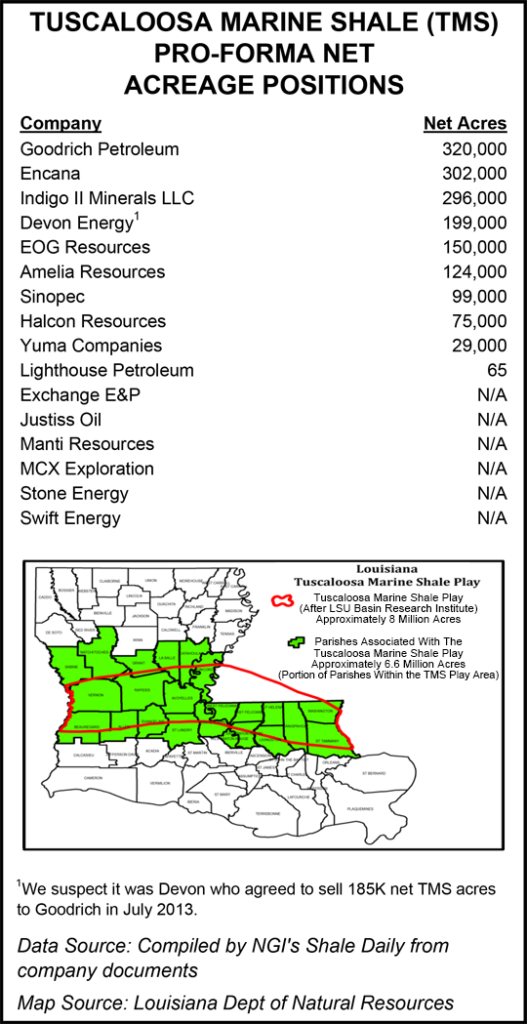 Gross oil production associated with the properties averaged 750 b/d during March. At closing, Goodrich will own about 320,000 net acres in the TMS when combined with its current position. The company said it will prioritize the acreage with the ultimate number of retained acres to be based on geologic location, timing and amount of lease extension payments, and future rate of development of the play.

Goodrich said it plans to fund the acquisition with its senior credit facility, which along with available cash had about $190 million of available liquidity pro forma at March 31. Upon closing, the company’s borrowing base will increase by $18 million to $243 million.

“We view this transaction as meaningful for our shareholders as we have added proved developed producing reserves, facilities and infrastructure to leverage off of for future development and more than doubled our acreage position and exposure to the TMS with very little change in our available liquidity,” said CEO Walter Goodrich.

The deal has an effective date of March 1, 2013 and is expected to close by Aug. 22, subject to adjustments. The remaining 33.3% working interest owner in the producing assets and leasehold has elected to retain its interest and participate with Goodrich in developing the assets.

“Longer term, we believe the company will look to bring in a joint venture partner to fund development of the play, and this transaction brings additional scale for a potential partner,” Douthat wrote.

In May, Goodrich touted improved drilling procedures and drilling cycle times in the TMS (see Shale Daily, May 10).

The company is participating in the completion of the Anderson 17H-2 (7% WI) and Anderson 17H-3 (7% WI) wells, with results expected within two to three weeks. The company is drilling the CMR/Foster Creek 20-7H-1 (98.5% WI) well, with current plans to keep one rig running in the play through the end of the year. “With continued success, the company will likely accelerate development of the play with a substantial increase in capital allocation in 2014,” Goodrich said.

“We are encouraged by our latest well result in the TMS, with the lateral placed above the rubble zone and drilled at an estimated cost of approximately $13 million,” the CEO said. “We anticipate a further reduction in costs going forward as we continue to improve on our drilling efficiencies, as well as utilize multi-well pad drilling, zipper fracks and realize additional service company capacity in the play.”